After months of stalemate, the Parliament being unable, time and time again, to elect a new President of the Republic, former general Michel Suleiman was elected and sworn into office on May 25. The parliamentary election in June 2009 surprised many. A close draw was predicted, but the Sunni-Christian March 14 Alliance managed to win 71 seats, against 57 seats for the opposition, the March 8 Movement consisting of Shiite parties Hezbollah, Amal, and Michel Aoun’s Free Patriotic Movement. Yet in terms of votes, March 14 had not achieved a majority. It took five months to form a government, headed by Saad Hariri, son of Rafic Hariri. Eventually, on 6 November 2009, March 14 and the Hezbollah-led opposition agreed on a Government of National Unity, on the formula of 15-10-5 (15 ministerial portfolios for March 14, 10 for the opposition, just short of the blocking third, and five to be named by the President). The Government of National Unity was approved by the different leaders, and, so it seems, by Syria, Saudi Arabia, and Iran.

It seems, however, to have become more and more difficult to form a government, given the complicated structure and the power struggles between the parties. Although Hezbollah is not a party to the Taif Agreement signed in 1989 by the Lebanese Parliament to end 15 years of civil war, it has become so strong that it is impossible for any government to ignore this movement and its charismatic and influential leader, Hassan Nasrallah.

The Taif Agreement called for a gradual movement towards secularism, but twenty years after the end of the Civil War, Lebanon seems once more to lean toward a strengthening of religious and communitarian allegiances. Early 2010, Nabih Berri, the Shiite Speaker of Parliament, reminded his compatriots of this clause in the Taif Agreement and called for an end to sectarianism – only to be met by a wave of criticism or scepticism about his real intentions, as Shiites in a secular system would gain a majority.

Another Taif clause – repeated in UNSC Resolution 1559 – that still had not been met in 2010 is the disarmament of all the warring factions. Hezbollah not only never disarmed but intimates that it has more arms than ever. In 2008, it also demonstrated, for the first time since the end of the Civil War, that it was ready to use them against other Lebanese and not only against Israel. Yet, the Shiite party’s disarmament is hardly mentioned anymore, quite the opposite.

When in February 2010, Prime Minister Hariri warned repeatedly that Israel – whose Air Force flew over Lebanon numerous times, increasingly worrying Beirut – was looking for an excuse to stage another war against Lebanon, Hezbollah leader Nasrallah insisted his organization would defend the country in case it was attacked by Israel. Later, after joining a summit meeting in Damascus with Syrian President Bashar al-Assad and former Iranian President Mahmoud Ahmadinejad, Nasrallah spoke as a statesman on equal footing with both presidents. Their talks, a diplomatic source said, focused on the region rather than Lebanon. It must be noted, however, that Prime Minister Hariri has also resumed a more or less ‘normal’ relationship with the Syrian president.

This is one of the signs of an easing of tensions, another being the announcement by President Suleiman of the resumption of a National Dialogue, although the political leaders have from the start found it extremely difficult to decide on what subjects this National Dialogue should or should not include. Both the Shiite leaders and, on the other extreme of the spectrum, right wing Christian leader Samir Geagea threatened to pull out after a short while. 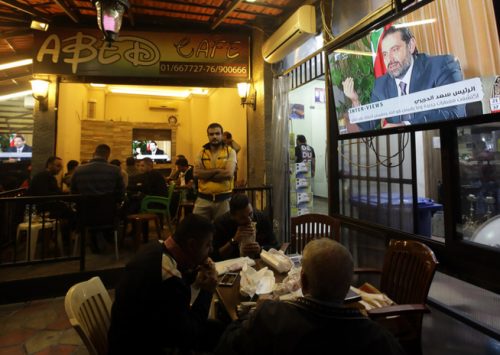 Saad Hariri’s Resignation as PM Could Spell New Crisis for Lebanon
By pulling Hariri out of office, the Saudis may hope to ensure that Hezbollah gets the blame and responsibility for Leba...