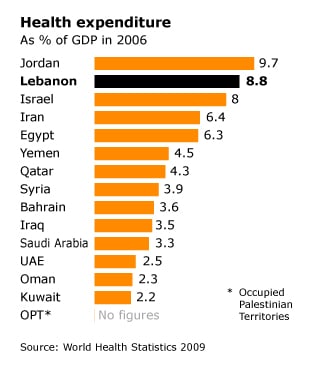 511 cases of tuberculosis were reported (mostly pulmonary tuberculosis) and only 50 cases of HIV were registered in 2006. The WHO notes that hospital-centrism is rather important in Lebanon, which ‘carries a considerable cost in terms of unnecessary medicalization and iatrogenesis, and compromises the human and social dimensions of health. It also carries an opportunity cost: Lebanon, for example, counts more cardiac surgery units per inhabitant than Germany, but lacks programmes aimed at reducing the risk factors for cardiovascular disease.’ (See World Health Report 2008. Primary Health Care)