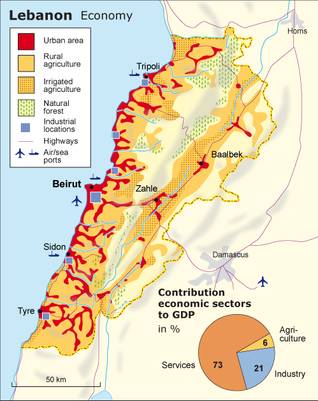 Lebanon is marked by huge social differences between communities and regions. For instance, the overall adult literacy rate is very high (91 percent for men, 92 percent for women), but in the southern town of Sidon, 35 percent of the population cannot read or write.

A fraction of the population is extremely rich. In the 1960s, 4 percent of the population shared one-third of the national income, whereas half of the population had to share less than one-fifth. Even nowadays there are huge differences in income. One out of four people lives under the poverty line (less than 1 USD per person per day) and one out of 12.5 lives in extreme poverty and cannot even provide for his basic needs. There is a huge disparity in the distribution of poverty with a heavy concentration in certain regions. Hermel, Baalbek and Akkar witness the highest poverty rates, Beirut the lowest (0.7 percent). On the other hand, some made a fortune – in particular in the real estate business – as a result of the reconstruction programme after the Civil War and the low income taxes.

The geographical age distribution follows that of income and literacy: the younger the population, the poorer and less educated. The more peripheral districts are notably younger than Beirut and Mount Lebanon. Noteworthy is that the male/female ratio average drops suddenly from 104.4 for age group of 15-14 to 92.3 for the 25-29 year olds, and it remains low even up to the 65 year old age group. One explanation for this sudden drop may be the emigration of young persons (see Youth).

Not counted among the Lebanese are the 400,000 Palestinian refugees (and possibly many more illegal Palestinians), who enjoy no civil rights and often live in dire circumstances. Unemployment is extremely high among them. Those who do have jobs, are often employed as seasonal workers in the agricultural sector or as builders.

Quite another form of imbalance is the military status of Hezbollah, the only political party that has not disarmed after the Civil War, not even after the departure of the Israeli and Syrian occupants in, respectively, 2000 and 2006. Public opinion is divided on this subject.