Illiteracy has all but disappeared: only 1.3 percent of the under 25 cannot read or write and today, girls (1.3 percent illiterate) doing better than boys (1.6 percent). Almost half of the under 25 (49 percent) are fluent in at least one foreign language, mostly French (19.3 percent) or English (15.2 percent), with 13.8 percent speaking both. Extremely few (0.5 percent) though, speak another foreign language.

Gross enrolment rates in education are very good (94 percent for primary school, 83 percent for secondary school), particularly in comparison to other Arab countries, but the net enrolment rates (based on the International Standard Classification of Education) are significantly lower (82 and 73 percent, respectively). Still, four out of five complete primary school. The proportion of students enrolled in higher education (3283 for every 100,000 inhabitants in 1999, or 48 percent of their age group in 2006) is one of the highest ratios in the Arab world. Gender equity is largely achieved on all levels and types of education except for higher technical education (where females constitute only 39 percent) and in disadvantaged areas.

Health care seems in need of improvement. Slightly more than half (51.5 percent) of the under 25 are covered by medical insurance. Emigration, particularly among the younger generations, is a problem. It soared during the Civil War, but even after the war ended (1990) tens of thousands of mainly young qualified Lebanese continued to leave annually. This is related to the difficulty of finding (adequate) jobs. The proportion of employed among the 15-24 years old is 31 percent, much lower than that of the overall working age population (15-64): 51 percent. This may also reflect the high percentage of young people seeking higher education (36 percent of the 15-24 age group go to university or have a university degree). But the proportion of unemployed is also much higher among the younger generations. The overall unemployment rate is 9.6 percent (7.4 male, 8.0 female), but under 30 we see two-digit unemployment rates, rising as high as 27 percent for the 15-19 age group (see table below). Interestingly enough, university degree holders represent 21.2 percent of the total unemployed, while 27.6 percent of this total attained an elementary level education, and 26.2 percent have an intermediate level education. 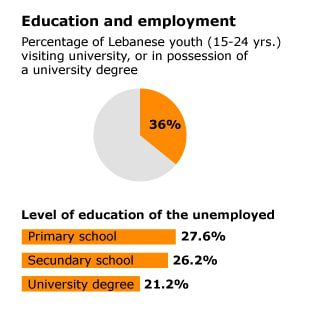