Fanack Home / Libya / Past to Present / Could Takeover of Libya’s Oil Crescent be Nail in GNA’s Coffin?

Could Takeover of Libya’s Oil Crescent be Nail in GNA’s Coffin?

On 11 September 2016, Libyan National Army (LNA) forces loyal to Khalifa Haftar, a renegade general opposed to Libya’s unity government in Tripoli, seized the so-called ‘oil crescent’ town of Ajdabiya. In a matter of hours, the forces had gained control of the region’s main oil terminals, Ras Lanuf and al-Sidra. Twenty-four hours later, it was the terminal of Zuwaytania and, the day after, the port of Brega. This single event changed the course of the Libyan civil war, which broke out after revolution ousted Muammar Gaddafi in 2011, putting Haftar, and by extension the rival Tobruk government, in control of more than half of Libya’s oil production.

The attack took place on the eve of the Muslim festival Eid al-Adha, when most Muslims join their families and rest. Eid, in general, is a time of peace and soldiers tend to be less vigilant. Most importantly, the attack came as the strong, Tripoli-aligned al-Bonyan al-Marsous brigades were struggling to liberate the city of Sirte from Islamic State. The fighting had been ongoing for months, leaving al-Bonyan al-Marsous, which had suffered hundreds of casualties, diminished and exhausted.

Moreover, Haftar’s forces were fighting a coalition of Islamist militias in Benghazi and had conducted a series of attacks against the city’s Islamist forces. The attack, which started at dawn, thus took everyone by surprise. It was reported that Haftar had Egyptian backing.

As his troops advanced, they faced only minor resistance from the Petroleum Facilities Guards, Ibrahim Jadhran’s militia. The latter had declared himself the lord of the oil crescent and Ajdabiya in 2012, moving from being a local unit commander, appointed by the central government in Tripoli, to a federalist calling for autonomy. Yet when Haftar attacked, Jadhran’s militia disbanded. In fact, the tribal leaders of his forces had allegedly signed a secret deal with Haftar, asking their sons to abandon Jadhran once the LNA advanced. It was a betrayal that cost the federalist leader his seat.

Jadhran was nowhere to be found when the LNA and Ajdabiya’s citizens attacked his mansion. It was rumoured that he fled during the attack. The same day the terminals were seized, Haftar announced that they would be returned to the National Oil Company (NOC). The company, operating from Tripoli, is one of the last institutions not to be affected by Libya’s political division. It is, however, perceived as being closer to the UN-backed Government of National Accord (GNA). Hence, the House of Representatives (HoR) in Tobruk and Haftar are suspicious of it. His announcement was as surprising as his flash attack.

Thus, while Tripoli initially condemned the attack, it later had to refine its response. Moreover, NOC’s governor welcomed Haftar’s announcement and travelled to Ajdabiya two days later. During a press conference, he said that his company would resume oil exports from the terminals as soon as possible. The international community, led by the UN, denounced the move. Martin Kobler, head of the UN’s Support Mission in Libya, had secured a deal with Jadhran in July, allowing the NOC to exploit the oil crescent. By accepting the deal, Jadhran entered the political game, gaining the recognition of the official government and the international community. It was not an ideal pact, but the lesser of two evils: the oil would remain in Jadhran’s hands, rather than falling into Haftar’s, and Jadhran would share the revenues with the government in Tripoli.

So when the LNA took the oil terminals, the fragile process that had been put in place just months before was derailed, complicating an already complex situation. In fact, in addition to Libya’s de facto partition between Tripoli (GNA) and Tobruk (HoR), and the continuous development of semi-autonomous city-states such as Zintan and Misrata, a legal disagreement broke out. In August, the HoR voted against the GNA. The vote was part of the Skhirat Agreement, signed in 2015, which brought the GNA under Prime Minister Faiez Sarraj to power. However, it was expected to be a vote in favour of the GNA, not a vote of no confidence.

While handing over the oil crescent to the NOC seems straightforward, it should not be seen as a benevolent act by Haftar. It is the latter’s forces that will keep the terminals secure, officially to avoid any counterattack by Jadhran, who made his first unsuccessful attempt to strike back a week later. But the real reason Haftar wants to stay in Ajdabiya is the power his new position brings: he is now the man directing the flow of Libya’s oil, allowing the NOC, and by extension Libya’s economy, to function.

Moreover, this position has given Haftar’s popularity a major boost. For someone aspiring to become Libya’s equivalent to Egypt’s al-Sisi, taking over the terminals is an omen. Unsurprisingly, he was elevated to the rank of field marshal by the head of the HoR, Aguila Saleh, a few days after the victory.

Haftar has now secured a place in Libya’s political transition, and his demands – becoming the head of a new unified Libyan army under a central government and keeping the army out of civilian hands – will perhaps be met in future political negotiations. Consequently, the fate of the GNA, and by extension Libya’s peace and unity, looks increasingly uncertain. 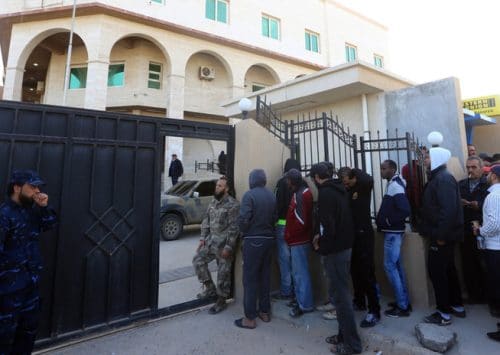 Political Divisions and Oilfield Shutdowns Keep Libya’s Economy on Shaky Ground
According to The Central Bank: the crisis was the result of ‘political division and the deterioration of the security ...