Fanack Home / Libya / Past to Present / In Libya, Battle for Derna Polarizes Residents

Days after returning to Libya and ending rumours of his death, Field Marshal Khalifa Haftar announced an offensive to recapture the city of Derna on 7 May 2018. While Haftar’s self-declared Libyan National Army (LNA) had besieged Derna for two and a half years, it remained the only city in eastern Libya outside its control.

That changed when tribes and fighters loyal to Haftar entered the city to defeat the Derna Protection Forces (DPF), a loose band of Islamists and jihadists that until recently were known as the Derna Mujahedeen Shura Council (DMSC).

Experts say that only a few militants in ASMB were willing to engage in a national democratic process, putting them at odds with hardliners and extremists. The coalition was nevertheless responsible for driving out the Islamic State group (IS) in 2015. Since then, civilians in Derna told Fanack Chronicle that the DPF has enforced draconian rules and arrested dozens of young men for ostensibly being spies for the LNA. DPF’s brutal rule exacerbated grievances, compelling many people in Derna to support the arrival of Haftar’s forces.

Other inhabitants are more ambivalent about the LNA. In a policy brief for the European University Institute, researcher Al-Zubayr Salem wrote that since besieging Derna, the LNA has compounded the crisis by failing to make a distinction between the DMSC and civilians. Worse still, civilians who support the LNA said that Haftar’s forces have shown little regard for human life.

One incident occurred in early June, when a 60-year-old woman and her son drove to Derna’s main vegetable market to pick up food and water for their family. Seconds after the son left his mother in the car, Haftar’s forces fired a missile at the vehicle. “She suffered shrapnel wounds to her head, back and hands,” Fairouz, an LNA supporter and the woman’s grandniece, told DW news.

The woman died from her wounds two weeks after the LNA announced the capture of Derna on 28 June. A man who asked to be identified as Mohammad told Fanack Chronicle that most people are still afraid to go outside because of the many improvised explosive devices (IEDs) that the DPF planted around the city.

Despite the lingering danger, the number of casualties has been relatively low in Derna, with fewer than two dozen civilians killed in the fighting. But terrorist expert Lidya Sizer warns that the conflict could flare up again if the LNA mistreats the population. “I think parts of the population in general in Derna will initially welcome the LNA, but the LNA will be suspicious of all Derna residents who lived under al-Qaeda control for almost a decade,” she said.

Awliya al-Dam (‘avengers of blood’) is one LNA faction that observers are concerned about. The group blames the DPF for assassinating members of its tribe and intends to settle scores with suspected DPF supporters.

Aliya (not her real name) said that Awliya al-Dam has looted and burned down the homes of young men who fought with the DPF. She further claimed that fighters’ family members have been arrested. “I know a sister of one of the fighters with the DPF who was taken into custody by Awliya al-Dam,” she said.

In June, observers also feared that the LNA would not allow hundreds of people to return to the city – just as it did after  capturing Benghazi last summer – out of suspicion that only DPF supporters had fled the fighting. But Fairouz, the LNA supporter who lives in the suburbs of Derna with her family, said that her relatives recently returned to their homes without interference.

Derna currently appears to be relatively calm, but Sizer warned that the LNA will face a myriad of challenges in the city. She predicted that DPF cells will launch insurgent attacks on LNA checkpoints and convoys. If the DPF is totally destroyed, she anticipates that some former fighters will join IS cells, even though DPF fought against IS in 2015. Other groups in the east may also ally with extremists to undermine Haftar’s forces.

That scenario already played out when militia leader Ibrahim Jadran tried to retake oil ports from the LNA while the latter was preoccupied in Derna. Although Jadran’s forces were driven out just one week later, experts expect the LNA to face similar challenges now that it controls all of eastern Libya.

Civilians in Derna, meanwhile, have to cope with what is quintessentially military rule, although the LNA still functions more like a militia and less like an army. Many residents are, of course, celebrating after living under IS and then the DPF for more than half a decade. But others like Aliya are afraid of reprisals.

She told Fanack Chronicle on 22 June that she was forced to close one of her Facebook accounts after condemning the LNA online for executing fighters and alleged DPF supporters. Her comments even prompted a backlash from her relatives, who warned her father to make her keep quiet.

“I don’t like Islamic rule, but I don’t like the LNA in our city either,” Aliya said. “I’m scared. I fear that if the LNA knocked on my door right now, my father would willingly hand me over.” 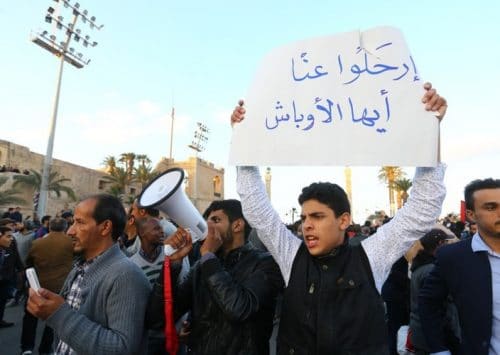 Abdullah DOMA ©AFP
Abdullah DOMA ©AFP
"Ignorance leads to fear, fear leads to hatred, and hatred leads to violence.
This is the equation."
IBN RUSHD/AVERROES (1126 – 1198)
We are a Dutch not for profit organisation (NGO), financed solely by individuals who share our belief in the importance of publishing and disseminating reliable, unbiased information on the Middle East & North Africa region. To represent the voice of the region’s people, we carefully echo the region’s heartbeat by offering fact-checked and therefore credible information.
Your support is greatly appreciated and helpful!
Donate