Russia’s deepening involvement in Libya’s ongoing civil war, supporting Field Marshal Khalifa Belqasim Haftar and his Libyan National Army (LNA) that is waging an offensive against the United Nations-backed Government of National Accord (GNA) led by Fayez al-Sarraj, have been exposed in recent reports.

The news is another notch in the belt of foreign involvement in the conflict, with the international community split between support for the two rival parties.

Libya has been embroiled in war since NATO forces launched an offensive to overthrow now deceased leader Muammar Qaddafi in 2011.

In the 1980s, Haftar broke from Qaddafi and spent two decades in exile in the United States (US), with suspected links to a CIA operation to assassinate the former dictator before returning to Libya for the 2011 revolution.

While the GNA assumed its mandate, Haftar emerged publicly in 2014 to urge Libyans to rise up against the GNA, a sentiment that particularly resonated with people in Benghazi who had been subjected to a takeover by Islamist groups and deemed the GNA a failure in tackling terrorism in the east.

With the help of foreign military equipment, Haftar was seen as successfully ousting these groups that had launched a series of attacks in the area. France sent forces in 2016 to help Haftar fight Islamist militants and, in 2017, Russia flew him to an aircraft carrier in the Mediterranean.

Foreign assistance enabled Hafter to control large swathes of the country in the east, including Benghazi. His forces then moved south and north into Tripoli in 2019, with such foreign support arguably providing him with staying power.

Russia, in particular, has been acknowledged as bankrolling the LNA, printing money for the rival government. A large container full of Libyan banknotes was stopped in early November by the Maltese government as it was being shipped to Libya.

Despite signals of support, Moscow has claimed neutrality in the conflict and has to some extent played both sides, seeking to extend its influence to the Mediterranean. It now appears to be playing a more direct role, according to a report in The New York Times.

The report detailed snipers employed by private military company the Wagner Group with links to the Kremlin operating in the country. The same group allegedly led Russia’s intervention in Syria. In addition, Haftar has been associated with a number of Russian diplomats and advisers.

Tim Eaton, research fellow with Chatham House’s Middle East and North Africa programme, told Fanack it is important to disaggregate which Russian players are acting in Libya. “Although the presence of Russian mercenaries fighting alongside Haftar’s forces is well publicized, other elements of the state – a Duma committee and Chechen networks – have engaged extensively with actors in the west of Libya.”

“The end in Libya is not about Libya itself but about other relationships with Arab states,” he said. The United Arab Emirates, Saudi Arabia and Egypt have all provided support for the field marshal.

“They’re putting this investment on the ground to show how they can be useful allies to these three states and how they’re going to advance their policies,” he said.

He added that the activities of the Wagner Group and other private military companies also serve to advertise themselves to other African countries, such as the Central African Republic, as well as projecting power in the region.

“[Russia knows] Libya is a problematic place for the Europeans. It’s kind of a perennial issue in the [United Nations] Security Council, and the more investment they have on the ground, the more necessary part of a solution they become.”

France has also reportedly been quietly backing Haftar. The US, while outwardly supportive of the GNA, has not been anti-Haftar.

Haftar also exerts some control over the country’s oil resources, including installations in the south and east.

In July, Mustafa Sanalla, head of the state-owned oil company NOC, warned that parallel institutions may try and control Libya’s oil, requesting necessary Security Council resolutions. However, analysts say that the LNA is unlikely to move forward with such an idea. Haftar would not want to elicit anger from the Americans, particularly as the US re-entered Libya with a new ambassador in August.

Jalel Harchaoui, research fellow at the Clingendael Institute, said Haftar understands he must not rock the boat. “The Americans are actually helping him, very slowly. Yes, very slowly. But they’re still going in the right direction in terms of helping him and hurting his enemies.”

At present, both the GNA and LNA need each other, said Eaton, because the LNA controls most oil and gas infrastructure whereas the GNA controls the means of distribution. This means all revenues from oil and gas sales can only go through Tripoli before being redistributed to the areas under LNA control.

“In a way, it’s remarkable that we could be sent into a civil war and oil and gas production hasn’t been hit significantly because both sides need to keep that system up and running,” he said, adding that this may become more difficult as the LNA seeks to take over more institutions.

The GNA has its foreign backers as well, but with weak support from Western powers it mostly relies on Turkey. The intervention from Ankara has helped prevent Haftar from taking Tripoli. The GNA is also supported by Qatar and a number of militias.

“I don’t believe that many people are fighting or anyone at all is fighting for al-Sarraj, but rather they’re fighting against Haftar and what he represents, in terms of a return to authoritarian rule,” said Megerisi.

Analysts also note the amalgamation of smaller grievances and micro-conflicts that have attached themselves to the larger forces at war, detailed in a paper published by Harchaoui earlier this year.

He told Fanack that the “external injection of funds and weapons, and ideological support and diplomatic cover and political blessing” that comes from outside can help a local issue when it attaches itself to a bigger faction. “When their faction wins, who knows? Maybe it’s going to splinter and fall into small pieces again.”

Billions of dollars of support from Russia has also led to a large build-up of debt, resources have been diverted from the actual running of the country and the strain is starting to show.

Neither are there signs that external support for Haftar is dwindling, said Eaton. Although that is no indication that Haftar can win this war by establishing the position of dominance he seeks, Eaton added, politically, it would be difficult for him to be seen to be going backwards.

This all points to a longer, perhaps protracted conflict and the normalization of war. “This has psychological implications, it has political implications,” said Megerisi. “It makes it increasingly difficult to forge a peace deal.” 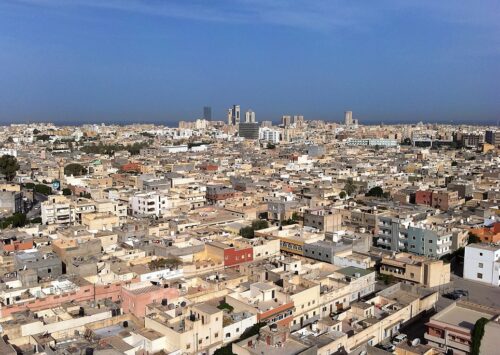