France and Italy are competing to lead diplomatic attempts to stabilize Libya, but their efforts risk exacerbating the conflict.

In May 2018, Paris hosted talks that brought together dozens of delegates and heads of states, as well as four rival Libyan figures: Fayez al-Sarraj, who leads the Tripoli government which is backed by the UN; General Khalifa Haftar, who heads the rival power, the self-described Libyan National Army (LNA) in the east; Aguila Saleh Issa, the parliament speaker and opponent to al-Sarraj; and Khalid al-Mishri, the head of Libya’s High Council of State. Despite the talks reuniting key players of the Libyan conflict, Rome was noticeably absent: it was dealing with its own political crisis, which had been triggered by the Italian coalition government coming apart.

At the Paris conference, rival Libyan leaders nonetheless agreed to hold elections by December 10, which experts predicted was impractical. The following August, the Italian Ambassador to Libya, Giuseppe Beroni, told reporters that he didn’t want elections in Libya at any cost. His statement sparked street protests in several Libyan towns.
“The ambassador sought to provoke the Libyan people by stirring Italy’s colonial legacy in Libya,” Amer Abu Dawya, a professor of political science at Tripoli University, told Gulf News.

Despite Beroni’s remark, Libyan elections were postponed when violent clashes erupted in Tripoli by the end of August and lasted a whole month. During the fighting, Italy’s far-right interior minister, Matteo Salvini, took a swipe at France.

“Italy should advocate for peace and stability in the Mediterranean and the incursion of others which only act upon economic prompts should not replace peace,” Salvini told reporters.

France’s failure to stabilize the country encouraged Italy to organize its own conference, held in the city of Palermo on November 12. U.S president Donald Trump had previously weighed in, endorsing Italy’s ambition to hold talks when he praised “Italy’s leadership role in the stabilization of Libya and North Africa” in July 2018.

But like the talks in Paris, the conference in Palermo didn’t stabilize the country. It merely secured a promise from General Khalifa Haftar to not attack the rival government in Tripoli.

Since then, Italian and French officials have acknowledged that diverging interests are to blame for their competition in Libya.

The former prefers to deal with the internationally-backed Government of National Accord (GNA) in Tripoli. Italy has signed agreements with the GNA, permitting militias to intercept migrant boats and return those on board back to Libya’s horrific detention centers. Italy has even sent naval vessels to help militias with the task and has sent troops to guard against smuggling routes in the south of the country. While migration is the hot issue, Rome also has interests in securing lucrative energy assets in Libya.

But France has different objectives. President Emmanuel Macron first and foremost favors stabilizing Libya’s south, where smugglers and jihadists are exploiting the increasingly porous borders with Sudan, Chad and Niger. Paris has thrown its weight behind Haftar and believes that he is the best person to combat terrorism in Libya and secure France’s sphere of interest in the Sahel region.

France also has economic interests in the country. Middle East Eye reported on May 28, 2018 that the French energy company Total secured access to major oil reserves in the east, which has considerable potential for exploration.

But it’s mainly in the south that Italy and France are competing. Both countries have tried to separately broker an end to tribal fighting while coopting militias to secure their interests. Yet the lack of coordination between France and Italy has exacerbated local tensions.

The leader of the Awlad Suleiman, a prominent tribe in the south, even said in April 2018 that various factions in the area were conducting talks under the guidance of France. The aims of the talks were to reportedly replace a previous ‘stabilization’ agreement brokered by Italy in 2017.

Matteo Ilardo, a researcher for the Austrian Institute for European and Security Policy, has observed that Rome and Paris are “blinded by colonial-fashion ambitions” and that their initiatives in Libya “often overlap or compete.”

Federica Saini Fasanotti and Ben Fishman, two commentators on Libya affairs, further argue that the competition between France and Italy in Libya has more to do with European politics than diverging interests.

“Macron considers himself – and France – to be the standard bearer for the EU, defending liberal values and international cooperation in a time of rising populist nationalism,” Fasanotti and Fishman wrote in Foreign Affairs. “[Macron] naturally sees the new Italian government as a threat to his political vision.”

The distaste that both governments have for each other is growing. In a speech on June 21, Macron warned against those who hate Europe and compared populism to ‘leprosy,’ a veiled criticism of the Italian government.

The Italian Deputy Prime Minister and leader of the Five Star Movement, Luigi Di Maio, quickly responded to the remark. The real leprosy, he said, is the hypocrisy of Macron, who condemned Italy’s border policies but didn’t allow a rescue ship with 600 migrants to dock in France.

Since last summer, the bickering hasn’t stopped. On January 22, 2019, Salvini again provoked the French government when he said that France didn’t care about bringing calm to Libya because its energy interests were at odds with those of Italy.

An official in Macron’s office said that the accusation was baseless and ‘ludicrous,’ while Prime Minister Conte tried to mitigate the damage of Salvini’s comments by telling reporters that relations between the two countries were still strong.

While that may be true, diplomatic ties are clearly wavering. That was indicative after France summoned Italy’s deputy prime minister, Luigi Di Maio, when he accused France of pillaging Africa’s resources through colonization and generating mass migration to Europe. Abu Dawya, the professor from Tripoli University, warns that the ongoing rivalry will have debilitating repercussions for his country.

“The rivalry between Italy and France is by no means a positive factor that would lead to any progress in the slow-paced political process in Libya,” he told Gulf News. “On the contrary, it feeds inter-Libyan divisions.” 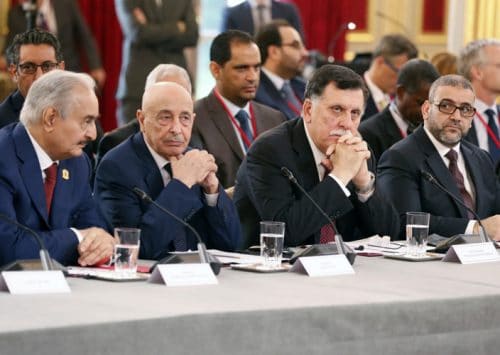 Paris Conference unites Rival Figures, but not Libya
Besides holding elections, the terms of the agreement include unifying the country’s key financial institutions such a...