Libya More Divided than Ever Amid Escalating Violence

On 3 March 2017, the Libyan National Army (LNA) led by General Khalifa Haftar lost two key oil terminals, Sidra and Ras Lanuf, to the Benghazi Defense Brigades (BDB), an Islamist faction created in June 2016. This could have destabilized the potential new strongman, who heads the army loyal to the government in Tobruk, if he had not reacted quickly.

On 14 March 2017, less than two weeks after the BDB’s surprise attack, apparently supported by the al-Marsa Brigade, an experienced militia from Misrata connected to Fayez Serraj’s rival Government of National Accord (GNA) in Tripoli, the LNA took back the two terminals.

“If Haftar had failed to retake the oil terminals, his position would have been severely damaged, as his ability to realize the interests of his foreign backers would have been questioned,” Tarek Megerisi, an independent Libyan analyst and researcher, told Fanack. “Moreover, without the control of the oil terminals, his political capital in Libya itself would also have been damaged, because in Libya the one controlling the oil taps controls the nation’s revenue and so has great leverage over all other factions.”

In the meantime, the government in Tobruk decided to withdraw its support from the 2015 United Nations-brokered Libyan Political Agreement that connected it with the internationally recognized GNA, formalizing their divisions. In the current context, both sides are exposing their strengths and weaknesses, according to Megerisi: “This attack was a test of Haftar’s leadership and ability to maintain his gains. It was also an opportunity for him to size up his enemies and determine the threat they will pose for him in his quest for national control. Having retaken the oil terminals, despite the help afforded to him by his outside allies, he has seemingly passed the first aspect of this test.”

He continued: “Indeed, it has also given him the opportunity to attempt to divert the oil funds for personal gain, as was made evident by a recent statement by LNA spokesman Ahmed al-Mismari and a statement from the Eastern National Oil Corporation (NOC) chief Naji al-Maghrabi that he could no longer comply with the unity deal. However, given the manner in which he lost the oil terminals, with many members of the Magharba tribe, who had facilitated his takeover last year, deciding to abandon the LNA and take positions with the new-look Petroleum Facilities Guard (PFG, sponsored by the Presidential Council in Tripoli), questions remain about Haftar’s ability to maintain the patchwork of tribal and militia alliances that make up the LNA, as well as how sustainable it will be if he continues expanding.”

However, Haftar benefits from growing international support, such as the Conservative Middle East Council, a British right-wing think tank, which sent a delegation of politicians to Libya to meet him in early March 2017. Haftar also has strong links to Russia, which is likely interested in oil and gas resources. Russia supported the LNA’s seizure of four oil facilities along the northern coast in September 2016. In late February 2017, Russia’s state oil company, Rosneft, signed a cooperation deal with the NOC.

Since its formation, the GNA has been backed by the United Nations and therefore the United States, although President Donald Trump has yet to speak publically about Libya or its governance, as well as France, Italy and Britain. The Netherlands intervened financially in 2016, giving $2.28 million to an international fund to promote stability in the country. In October 2016, Tunisian President Beji Caid Essebsi said that Tunisia will support the GNA.

Yet since the United Arab Emirates established a military base in the eastern city of al-Marj, also in October 2016, Haftar appears closer to actual military assistance than his rival, which could be a deciding factor in the course of 2017.

Indeed, Haftar’s refusal to accept anything less than regime change in Tripoli may have cemented Libya’s future. In February 2017, Egypt, which supports Haftar, failed to convince the general to meet with GNA Prime Minister Serraj for talks in Cairo. In an article for Middle East Eye, Mattia Toaldo, a senior policy fellow at the European Council of Foreign Relations, wrote, ‘Haftar thinks it is only a matter of time before he will replicate in Tripoli what he did in the oil crescent in September: an almost bloodless takeover based on tribal alliances. He believes that he has the Russians and the Trump administration on his side. But Haftar is miscalculating the strength of both his domestic forces and his international support. Domestically, his real military forces are almost exclusively around Benghazi in the east and with a few more in the south.’

While the LNA was regaining control of the Sidra and Ras Lanuf terminals, clashes broke out in Tripoli between rival militias. These further weakened the GNA, which struggled to calm the violence, especially after it had publicly backed the BDB’s attack on the oil terminals.

“By publicly and wholly backing the attack, and seeking to reclaim the oil crescent, they boosted Haftar’s narrative that they are people who he cannot work with. That was reflected in the vote in the House of Representatives, from a bloc loyal to Haftar, to disengage from the Libyan Political Agreement in the aftermath of these attacks.” Megerisi told Fanack. “So, by opportunistically backing the attack without a consolidation and diplomatic follow-through, the GNA has only weakened its position in Eastern Libya.”

In reaction to the clashes, Haftar declared that militias should leave Tripoli or be ready to face the LNA forces. On 14 March 2017, reports emerged that Russia appeared to have deployed special forces to an airbase in western Egypt near the border with Libya. Any such Russian involvement may be an attempt to support Haftar, US and diplomatic officials said. Russia has denied this.

Yet these power games overlook an important aspect of the conflict: the population’s wellbeing. The end of the Libyan Political Agreement would mean even more instability for the country. “Although it is often criticized, [the agreement] has provided a clear political structure and path forward for Libya, and it has maintained the unity of its financial and oil institutions, which has been valuable in keeping the country solvent, containing conflict to some degree and helping to keep the country unified,” Megerisi explained. “Given the recent advances by the Eastern National Oil Company to claim exclusive control of the oil terminals, as well as the continued mobilization of forces and escalation of conflicts across the country, the end of [the agreement] would likely lead to a period of increased fighting and chaos in which every faction would try to create facts on the ground that would bolster its power and influence before the next round of political negotiations begin.”

Nadia Ramadan, a Libyan market researcher, added, “Our security and economy are simply deteriorating. We cannot continue with this civil war, which only brings chaos to the daily lives of ordinary Libyans. Unless there is a political agreement, the situation will continue to get worse. If a political solution is not found and we continue to have a civil war in Libya, there is no reason why the Islamic State won’t resurface.” 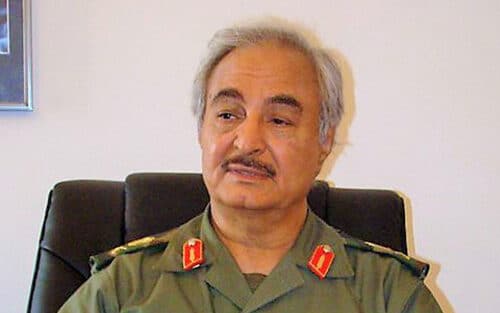