Libya remains highly volatile and the capital of Tripoli no exception. On 26 September 2018, a truce was inked to end heavy clashes, and yet the causes that spawned the fighting were never resolved.

Armed militias – those controlling Tripoli’s assets and those wanting a piece of the pie – have not been held accountable for terrorizing civilians.

That is not surprising, since the internationally-recognized Government of National Accord (GNA) has no leverage over the militias; neither does the UN Support Mission in Libya (UNSML), which went beyond its mandate to negotiate an end to the fighting.

Militias ruling Tripoli have evolved into a mafia-like network which now control businesses, ministries and key administrations. Wolfram Lacher, an expert on Libyan armed groups at the German Institute for International and Security Affairs, warned that groups excluded from this arrangement could team up to upset the balance of power in the capital.

“The pillaging of state funds – a hallmark of Libya’s political economy – now benefits a narrower group than at any previous point since the 2011 revolution,” Lacher wrote in a research paper published last April.

As usual, civilians are paying the steepest price for the militia infighting. On 23 September 2018, the Health Ministry said that 115 people were killed from the clashes in Tripoli, while UNICEF put the number of displaced at more than 25,000.

To de-escalate the fighting, the head of the GNA, Fayez al-Seraj, passed new economic reforms on 12 September. The reforms aimed to halt a liquidity crisis and improve the Libyan Dinar’s (LD) purchasing power. In 2017, the price of basic goods increased by 28 per cent compared to the previous year.

Seraj’s economic measures also seek to reduce the gap between the official exchange rate (1.3 LD to the dollar) and the black market exchange rate (6 or 7 LD to the dollar). Armed groups and corrupt officials have used coercion to exploit this disparity by purchasing Libya’s foreign currency at the official rate and then selling it on the black market to make a profit.

In a bid to limit corruption, the GNA has enforced a 184 per cent service fee on the official exchange rate for all foreign currency purchases, helping to shrink the disparity with the LD’s black market value while raising public funds.

The International Crisis Group (ICG), a non-profit organization based in Belgium that specializes in conflict analysis, stated that the new measures seem to be having the desired affect, but it also warned that the only sustainable solution to Libya’s economic woes is to unify the central bank so that it can devalue the currency.

“One immediate downside of the government’s unilateral announcement of these measures is that it reduced international pressure on the Tripoli authorities to hold a meeting of the board of the Central Bank of Libya, a necessary step toward reunification,” ICG reported in a briefing published in October 2018.

With the country divided and the economy flagging, the Islamic State group (IS) has re-emerged by waging a violent insurgency. Since being routed out of Derna, Sabratha and Sirte at the end of 2016, the group has carried out a myriad of operations. Already in 2018, IS has claimed responsibility for  12 different attacks.

The last attack was on 29 October 2018, when IS militants stormed the small eastern town of Al-Fuqaha and killed four people, including two policemen and the mayor’s son. At least a dozen townspeople went missing after the attack, presumably having been abducted by IS.

Afterwards, General Khalifa Haftar’s self-declared Libyan National Army (LNA), which controls eastern Libya, chased the militants into the desert. Residents of the town told the Boston Globe that they believe the attack was a retaliation for the LNA’s capture of senior IS militants.

The LNA is also still reportedly embattled with jihadists in the far eastern city of Derna. Haftar announced the liberation of the city from the Derna Protection Forces (DPF), a broad band of Islamists and Jihadists, in May. But Sagida Elnihum, who frequently speaks with her relatives and friends in the city, told Fanack Chronicle that fighting is ongoing. On 30 October 2018, she reported that scores of fighters from the LNA were reportedly killed in clashes with jihadists.

“It was a very bad day for Derna. [People] tell me that they still hear shooting and bombs in the middle of the town,” said Enlihum, speaking from her home in Canada. “Some streets are also still controlled by the DPF and sometimes they throw Molotovs at Haftar’s militias.”

French and Italian meddling is also exacerbating the conflict. Federica Saini Fasanotti and Ben Fishman, two experts on Libyan politics at the Brookings Institute and Washington Institute for Near East Policy, respectively, wrote that the French-Italian rivalry over migration, hegemony over Europe and influence in Libya is adding to Libya’s long list of problems.

Italy’s populist coalition – an alliance between the Five-Star Movement and the League – has made stopping refugees from seeking asylum in Italy its top priority. This policy is upsetting the balance of power among militias while also forcing migrants to languish in the lawless country, where trafficking and abuse is rife.

As Italy pressures Tripoli to address the latter’s interests, France is coveting Haftar. Paris sees Haftar as the only figure capable of bringing security to Libya by way of military rule. The ambitions of both European countries have effectively undermined UN Special Envoy to Libya Ghassan Salame’s action plan for the country.

His plan was designed to amend the Libyan Political Agreement (LPA), out of which the GNA was born, as well as hold a national conference to bring together all of Libya’s key stakeholders. The next steps were supposed to include a constitutional draft and referendum, paving the way for parliamentary and presidential elections. Yet more than a year later, the action plan looks to be all but dead.

“Events over the past year clearly show how Salame’s action plan fell victim – predictably – to the interventions of foreign actors in Libya,” wrote Elissa Miller, a non-resident fellow at the Atlantic Council, a think tank based in Washington, D.C. “If Salame could not corral unity among the international actors involved in Libya in 2017, there is little hope he will be able to do so now.” 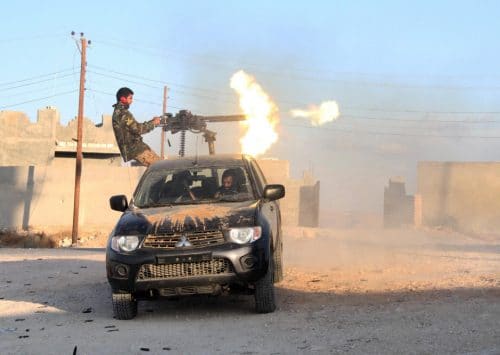