Fanack Home / Libya / Past to Present / Libya—More Divided Than Ever 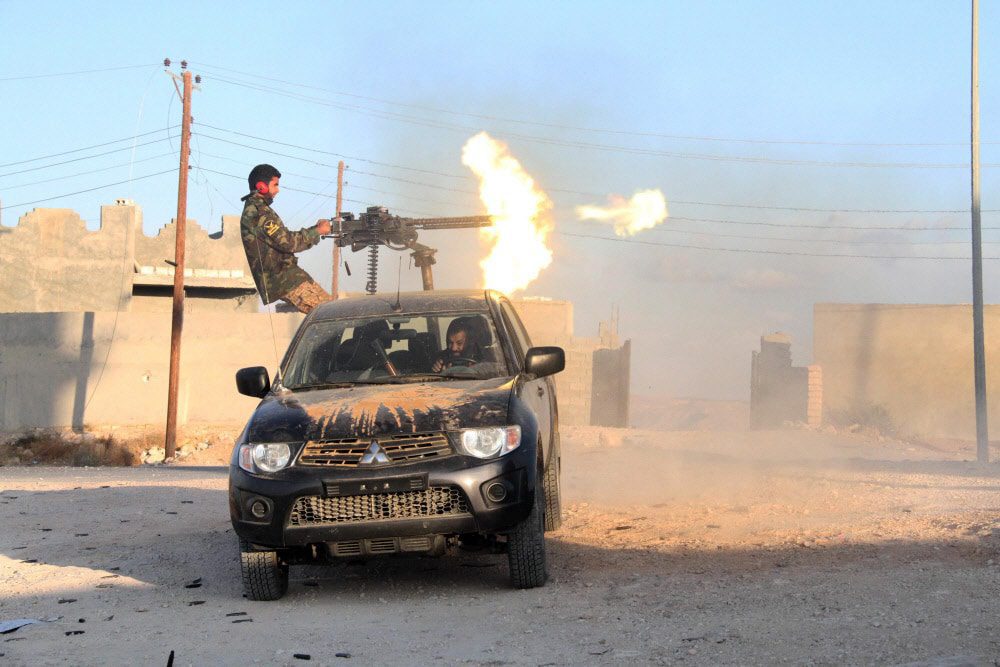 A Libya Dawn fighter fires a machine gun in Kikla, a town 150 Km south of Tripoli, where clashes between the Libya Dawn and local militias erupted, Libya, 21 October 2014. Photo Xinhua / eyevineLibya remains more divided than ever in July 2015, as the de facto partition between Tripoli and Tobruk enters its second year. There is a stalemate in Libya’s second city, Benghazi, where General Khalifa Haftar,the semi-autonomous head of the Libyan Army and the leader of Operation Libya Dignity, has been trying to dislodge Islamist militias since late 2014.

Haftar has also attempted a breakthrough in Tripoli, in April, by encouraging armed men sympathetic to his cause to attack the Libya Dawn militias, but that also failed. He later tried to retake the strategic coastal road between Tripoli and Libya, but his attack was repulsed. Dozens died in these attempts.

Deepening the separation still further, Tobruk’s prime minister, Abdullah al-Thani, has founded a new oil company to compete with the one that is headquartered in Tripoli; al-Thani’s company has a bank account in Dubai (the UAE has been a major supporter of Tobruk and Libya Dignity).

In fact, while Tobruk controls Libya’s main oil ports (Ras Lanouf and Sedra), oil is being sold by the national oil company based in Tripoli, and its remittances deposited in the Central Bank, which is also in Tripoli. Even though money is redistributed from Tripoli to Tobruk, some political pressures come with it, and it is that fact that pushed al-Thani to take such bold action.

Al-Thani escaped an assassination attempt in May, reportedly orchestrated by men affiliated with Libya Dignity, and he had to face his House of Representatives, which refused to accept the sacking of Interior Minister Omar al-Sinki that he ordered in February 2015. These events mirrored the internal difficulties of the internationally recognized government.

Haftar, his army chief, also had to deal with setbacks in his own camp, and he narrowly avoided a mutiny, when he dismissed one of his officers, Faraj al-Barassi. Al-Barassi, who was leading the Libyan army’s offensive on Derna, then called on his influential tribe and threatened Haftar. Al-Barassi was then pardoned and recalled to duty.

The situation in Tripoli is just a bit calmer. After some troops from Misrata began to pull out of Tripoli to retake their hometown, Salah Badi, a radical Islamist leader, decided to stay with his militia and announced the creation of a new army, al-Sumud, with the goal of “defending the revolution,” although it is actually a means of intimidating those in Tripoli and Misrata who are willing to reach a compromise with Tobruk as part of National Dialogue sponsored by the United Nations.

So, while peace remains elusive, political discussions continue. The National Dialogue held in Morocco has been described by UN Envoy Bernardino Leon as “Libya’s last chance.” It brings together representatives from Tripoli and Tobruk in the Atlantic city of Skhirat; a sixth round of meetings began in June. Some meetings took place in Germany, while other UN-backed talks were convened in Algeria (involving Libya’s political parties) and Tunisia (involving representatives of the various municipalities and Libya’s women leaders).

The various protagonists were pressured to reach an agreement, but many analysts fear that its execution on the ground, if it ever happens, will prove difficult (although some progress appears to have been made recently): the Skhirat agreement, signed in July, was boycotted by the main protagonists of Tripoli and Misrata (Libya Dawn and the General National Congress, GNC, Tripoli’s parliament, which runs the government).

The permanent state of war and the failure, so far, of the National Dialogue have weakened both Tobruk and Tripoli and created a vacuum that is increasingly filled by Islamic State (IS). Although they lost Derna in June 2015, after the various militias (pro–Libya Dawn and pro–Libya Dignity) cooperated to push them out, IS was able to take control of the coastal city of Sirte, Gaddafi’s hometown, and parts of the oil town of Ajdabiya. Ajdabiya was the site of an American airstrike in June that left dozens dead.

IS continued to attack Libya Dawn, targeting Misrata and killing scores. They also claimed responsibility for attacks on the South Korean, Moroccan, and Spanish embassies in Tripoli. In retaliation, Libya Dawn launched airstrikes on IS positions, while the GNC announced the creation of a new force whose mission is to counter the spread of IS. IS did not spare Tobruk either, staging assaults on political and military facilities, and they killed 30 Christians from Ethiopia, three months after their video-taped assassination of 21 Egyptian Copts in February 2015.

Like Libya’s political and security situation, its economy has continued to slump. The country’s economy decreased by 18 percent in 2014. Libya’s Central Bank reserves were estimated at $90 billion in April 2015, 25 percent less than last year ($133 billion in August 2014). The Libyan dinar has lost 15 percent of its value against the US dollar since 2014. The public sector pays out $18 billion in salaries every month, compared with $6.6 billion in 2011. The country sells 600,000 barrels of oil per day, only half the production achieved under Gaddafi. So prospects for the future are dim.

The “two Libyas” have had different foreign-policy agendas. Al-Thani reaffirmed his alliance with the UAE with the opening of a bank account in Dubai to conduct Tobruk’s oil business.

General Haftar visited Jordan in April and met with the king and other officials, seeking training (and possibly weapons) for his army. His air force bombed a Turkish ship loading oil in Islamist-held Derna, provoking Ankara’s anger.

Authorities in Tobruk arrested Sudan’s consul general for two days in April: Sudan is generally considered close to Tripoli, although its positions have recently begun to change.

Tripoli’s prime minister, Mohamed Ghouil, visited Tunis in April with a ministerial delegation and met with President Beji Caid Essebsi. Tunisia had two consulates: one in Tripoli and the other in Tobruk, and the visit reaffirmed Tunisia’s desire to keep ties with both sides. The embassy in Tripoli was, however, shut down in June, after it was stormed and its staff taken hostage by militiamen affiliated with Libya Dawn.

The Tunisian authorities arrested a leader from the coalition, the son of Tripoli’s justice minister, and convicted him of terrorism. His militia then retaliated by attacking the Tunisian diplomats and kidnapping hundreds of Tunisian workers in Libya. It was a blow to Tripoli’s attempt to earn international recognition.

Tripoli is also in the midst of an international conflict, that of illegal migration. More than 100,000 migrants crossed the Mediterranean in 2015, many of them departing from Libya. A migrant boat from Tripoli capsized in April; it was the deadliest such accident in history, costing 700 lives. This was followed soon by the death of 300 migrants at sea, and casualties have numbered in the hundreds since then. The dire situation has triggered a European Union decision to intervene in Libya against the human smugglers.

Libya’s descent into chaos is only accelerating, with little hope in sight. 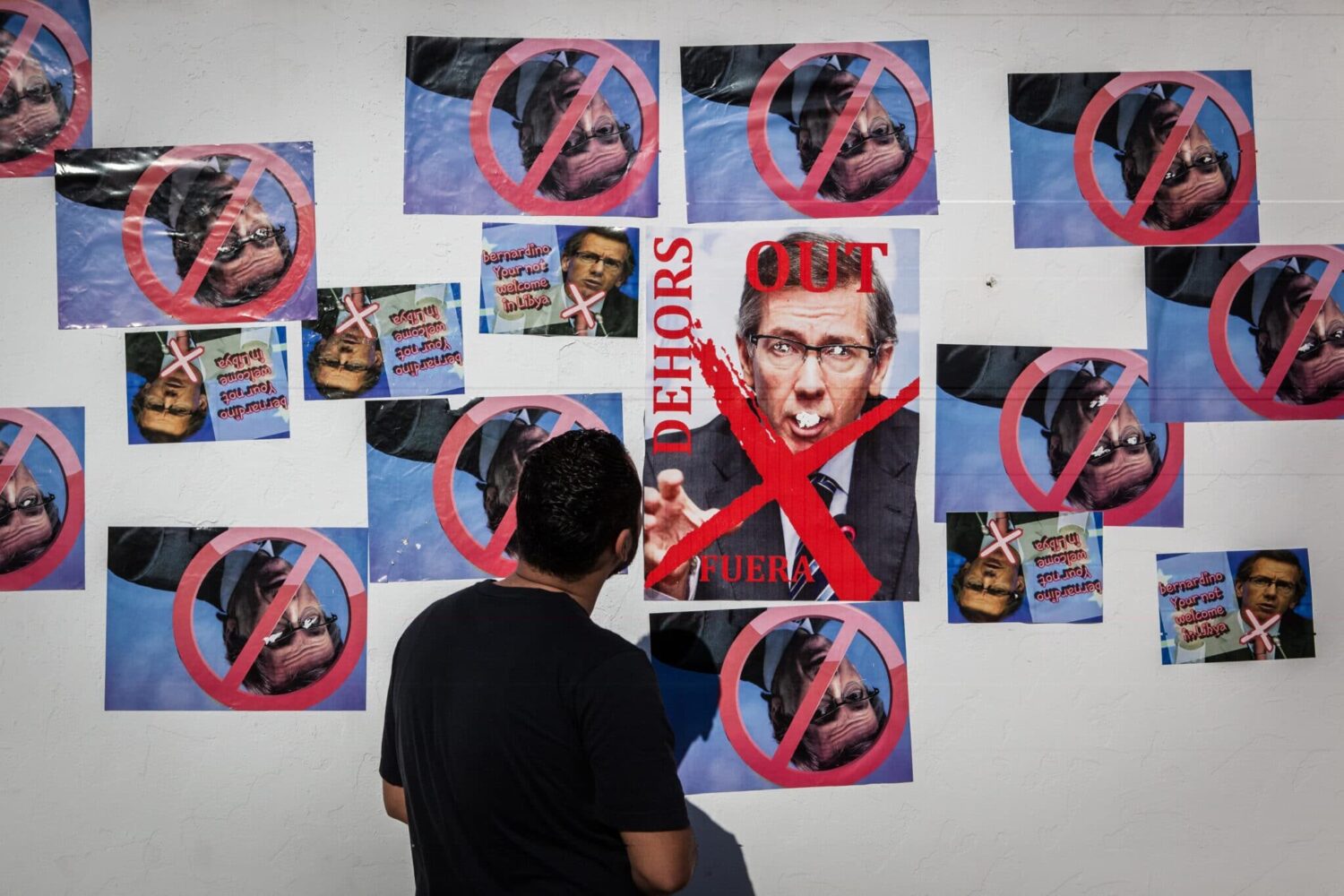