Reforms Versus Restriction in Freedoms

While Libya’s international reputation became pro-Western, internally it remained a very oppressive state. As early as 1988 Gaddafi had made a point of criticizing the revolutionary committees for their repressive behaviour and issued laws allowing freedom of expression. But these were more posturing than real changes. There were several high-profile examples of human-rights abuses in the 1990s. One was a massacre in 1996 at Abu Salim Prison in Tripoli, in which, Human Rights Watch estimated, 1,270 prisoners were killed. Another was the rigged trial of five Bulgarian nurses and a Palestinian doctor who worked at a public hospital in Benghazi and were accused of deliberately infecting 426 children with HIV-tainted blood in 1999; they were found guilty in 2004 and sentenced to death but were released after European diplomatic protests in 2007.

These well-known cases took place against a persistent background of the mistreatment of individuals, particularly members of Islamist groups, including the Muslim Brotherhood. International human-rights organizations documented consistent mistreatment of those who were arrested, including the use of severe torture. Migrant workers especially were subjected to human-rights abuses.

The Gaddafi government repeated its commitment to the protection of human rights in the early 2000s. Two human-rights groups were established, the Gaddafi International Foundation for Charity Associations (1998) and the Gaddafi Foundation for Development. Both organizations were headed by Gaddafi’s son Saif al-Islam, who carefully fashioned an image as a defender of liberty. He sponsored a visit to Libya by Human Rights Watch and intervened to have the Bulgarian nurses released and promoted an investigation into the Abu Salim massacre. But it became apparent that this was part of Saif al-Islam’s positioning himself to take over from his father, and the actual changes were few. 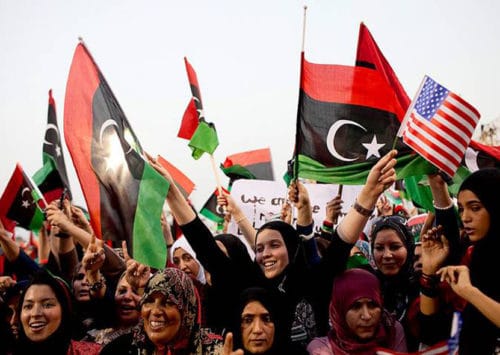 Governance & Politics
The overthrow of the Gaddafi regime was organized by a self-appointed National Transitional Council (NTC), which provide...