Khalif, turaf, ‘Be different, then they know you’, says an Arabic proverb. In Gaddafi’s case, this went beyond the eccentric personality cult at the centre of his regime to the adoption of unpredictable international policies.

Publicly, he emphasized some consistent themes: opposition to Israel, support for the revolution against conservative regimes, dislike of imperialism, and desire for regional unity. But the reality was less coherent. In the 1970s and 1980s he supported numerous foreign rebel and opposition movements, including the IRA, Palestinian groups, the Sahrawi liberation movement POLISARIO, the Filipino Moro Liberation Front, and the American Black Muslims. But he quickly abandoned causes when they were no longer convenient or he fell out with their leaders: Arafat’s acceptance of Camp David led to the expulsion of Palestinians from Libya, and Libyan rapprochement with Morocco led to the expulsion of Western Saharans. His support for left-wing rebels in Latin America convinced President Reagan that he was a ‘mad dog’. Reagan broke diplomatic relations with Libya four months after taking office and shot down Libyan planes in the Gulf of Sirte in August 1981. In 1982 Reagan imposed a trade embargo on Libya. This included oil and cut Libyan revenues by a third. Gaddafi’s meddling in the civil war in Chad eventually led him to occupy the Aouzou strip in northern Chad, which reportedly contained uranium deposits. Before the Chadians expelled the Libyan troops in 1987, between 8,000 and 10,000 Libyan troops had been killed.

The revolutionary committees began to operate abroad, running death squads that attacked opposition exiles in Athens, Bonn, London, Milan, and Rome. The climax came in 1984, at the Libyan embassy in London. While Libyan exiles protested outside, a shot was fired from inside the embassy killing British police officer Yvonne Fletcher.

In 1986, the United States accused Libya of involvement in Palestinian attacks on airports in Rome and Vienna. In April 1986, when a bomb exploded in a Berlin nightclub, injuring over 200 and killing two, Reagan sent US warplanes to attack Gaddafi’s residences in Tripoli and Benghazi city. The raids killed 130 people, wounded two of Gaddafi’s sons, and allegedly killed an adopted daughter.

The 1980s ended with the destruction of Pan Am flight 103 over the Scottish town of Lockerbie in 1988 and of a French UTA aircraft over Niger in 1989. More than 400 people were killed in these two attacks. In November 1991 the US and British governments accused two Libyans, Abdelbaset al-Megrahi and Lamin Khalifa Fhimah, of committing the Lockerbie bombing, and the UN Security Council demanded their extradition. This began a decade of international isolation. 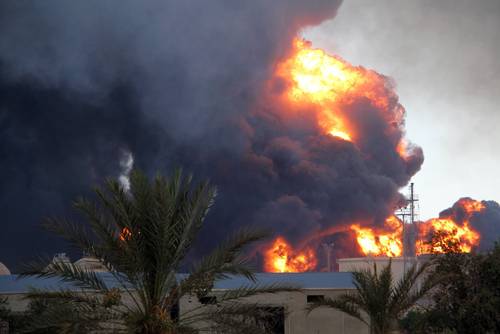