After meeting in Paris on May 28 2018, rival Libyan leaders agreed on a road map towards parliamentary and presidential elections for the country, which has been left in chaos since the Arab Spring and the death of its former leader, Colonel Gadhafi, in 2011. Rival governments in the east and west have claimed power since then, each side backed by militias. All sides, which included several of Libya’s neighbors, western countries and the UN, hope that Libyans will head to the ballot box on December 10 to elect a new government. The newly elected cabinet and parliament would then be given the task of stabilizing the country.

The agreement was signed by Fayez al-Sarraj, who leads the Government of National Accord (GNA) in the west, the government recognised by the UN, and the military strongman Khalifa Haftar, whose forces dominate the east. Aguila Saleh Issa, the president of the House of Representatives in the eastern city of Tobruk, who opposes the GNA, and Khalid Al-Mishri, the newly elected head of the High Council of State also inked their names to the agreement.

The fact that Al-Mishri, a member of the Muslim Brotherhood, agreed to sit down with Haftar was considered a major breakthrough. Haftar had previously framed all Islamists in Libya as terrorists, while Al-Mishri had said that he doesn’t recognize Haftar as a legitimate military figure. French president Emmanuel Macron nonetheless mediated the talks, and hailed the agreement as a major success.

“This is the first time these Libyan leaders accepted to work together and approved a joint declaration,” Macron said at the end of the brief conference, which included representatives from 20 countries. “Now, we have clear commitments for the country, an approved calendar for elections.”

Besides holding elections, the terms of the agreement include unifying the country’s key financial institutions such as the Libyan Central Bank, phasing out parallel government and institutions” and building a national army. It stipulates that all parties will preserve security during the elections, and respect the final outcome.

Despite the optimism of various stakeholders, analysts of the region are predicting that the roadmap to elections will face major hurdles. Several armed groups in the west of Libya even rejected the Paris conference and the signed agreement, claiming that it didn’t represent them.

“We call for real dialogue focused on the aspirations of Libyan society in its aspects,” the armed groups said in a joint statement before the talks. The factions also announced their opposition to foreign interference and to any efforts to impose a military dictatorship in Libya. Many opponents of Haftar fear that his patrons, especially Egypt and the UAE, are supporting the strongman’s ambition to rule the country with an iron fist.

Other armed groups have taken a more aggressive approach. In the weekend leading up to the Paris talks, factions uprooted the Presidential Guard – a GNA force – from areas near Tripoli’s international airport and the prime minister’s office. The violence was triggered in part due to agitation over the Paris meeting, according to diplomatic sources.

International Crisis Group (ICG), a non-profit think tank based in Belgium, predicted that the Paris conference would cause more problems than solutions. Some fighters reportedly expressed concern that France was subverting UN-led peace efforts. The UN Secretary General’s Special Representative for Libya, Ghassan Salame, has long tried to rally competing figures behind his own action plan, but the Paris agreement now risks trumping Salame’s initiative and authority. (France said the Paris summit was supporting the UN’s efforts, not supplanting them).

“We don’t see where the UN fits into all of this. What is the link between what the French are doing and what the UN representative has stated that he wants to do,” asked a politician from the western port city of Misrata.

While the link isn’t clear, Salame still expressed support for the Paris agreement. He claimed that he was optimistic about the process and that he had ‘never seen’ such a unified political will between key Libyan figures and international actors.

Libya nevertheless remains fragmented and volatile. For the past five weeks, Haftar’s forces have been waging a brutal campaign to try and retake the eastern city of Derna from hardline Islamists. And while scores of civilian causalities have been reported, nobody at the Paris conference uttered a word about the ongoing fighting. That was particularly surprising since Al-Mishri had previously threatened not to ink an agreement in Paris unless Haftar’s forces ended its siege on Derna.

“It’s actually a missed opportunity and a pity that a summit like this [that brought together] all the international and domestic actors in the room together didn’t deal with what are the ongoing conflicts in Libya today. Derna is the first one and Sebha is the second,” Claudia Gazzini, a Libya expert from International Crisis Group, told France 24.

“It would have been a good opportunity to at least use this platform to forge some consensus on how to form a taskforce to solve these conflicts through peaceful means instead of remaining silent,” Gazzini added.

An agreement is now in place, but analysts are skeptical about its enforcement. Tarek Megerisi, a visiting fellow at the European Council on Foreign Relations, wrote that with so many political elites and militia leaders benefiting from the status quo – by way of kidnapping, smuggling, or pillaging – few, if any, have an incentive to end the chaos.

International actors have thus grown exasperated, writes Megerisi. That said, forging an international consensus to ‘fix’ Libya has proved as trialing as building a domestic one.

Elections in December nevertheless do have the ability to jumpstart change – but the vote could just as easily destabilize the country. The only way that Libya might benefit from elections is if European states adopt a unified stance over the kind of elections they would like to have in Libya and oversee the process by working with the UN, the High National Elections Commission (HNEC) and other prominent players to lessen the risk of a catastrophe.

“Recent history has taught us that disunity and confusion on the international scene is inevitably mirrored on the ground in Libya,” writes Megerisi. “If 2018’s elections are not to mirror the [catastrophe] of 2014’s then the lessons of the last four years will need to be learned.”

France, it seems, is still learning that lesson. Macron appears to be pushing Libya to hold an election before the country is secure enough to have one. Nobody, for instance, knows if residents in Derna or Sebha will be able to participate in a national election if fighting ranges on. Those who are internally displaced may also be denied their right to vote, since they would be languishing outside of their constituency. Libyans who may want to run for elections could further be intimidated into withdrawing their candidacy.

With these concerns in mind, Gazzini told France 24 that Macron should have facilitated a stronger commitment from all rival figures to unify financial institutions and to restore security, rather than push for elections. Accomplishing these steps, she stresses, would do more to improve the lives of Libyans than an election can at this stage. 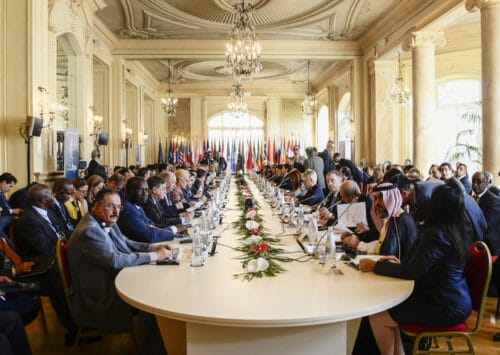