On 1 September 1969 twelve junior officers from the Libyan army seized power in a bloodless coup. Because it took place on the first or ‘opening’ (al-infitah) day of September, it came to be known as the al-Fatih Revolution. The officers emphasized their revolutionary intent from the beginning by forming a Revolutionary Command Council (RCC), following Nasserist tradition. They identified strongly with Nasserist Egypt. This Revolutionary Command Council was a shadowy body at first: it was not until January 1970 that all the names of its members were announced. By then it had become clear that its leader was Muammar Gaddafi, a captain who was promoted to colonel the day after the coup. He and the other members of the RCC came from non-elite backgrounds, many of them from the less prestigious tribes in the region around Sirte.

In a country with a weak sense of local nationalism, the terms of reference of the RCC were to Nasserist Arab nationalism. Their policies were directed towards expelling the Western bases, reorganizing relations with the oil companies, and shifting power from the old bureaucracy. Banks, hospitals, and trading and insurance companies were nationalized, and enmity for Israel led to the expulsion of the remaining Jewish population. But the new regime went much further than Nasser. Society was completely Arabized – only Arabic signs were allowed in the streets. Gaddafi was a much more personally devout Muslim than Nasser, and the regime went on to ban symbols of ‘Western moral decay’, such as alcohol, prostitution, pornography, casinos, and nightclubs.

Even so, Gaddafi’s version of Islam was not a traditional one. He preferred a form of belief in which everyone had the right to personal ijtihad, the interpretation and renewal of faith, traditionally matters reserved to scholars.

Despite the emphasis on Arab nationalism and Islam, the revolutionary officers found it difficult to win support among the population. They alienated the middle class with a new policy of creating a bond between political elites and masses, without including traditional tribal and religious leaders. In order to mobilize the population, the RCC set up the Arab Socialist Union (ASU), supposedly as a mass organization that it controlled. Any other form of politics, media, and trade unions were banned. But the ASU (whose name was modelled on Nasser’s own political organization) was never very popular, and Gaddafi himself emerged more and more as the main arbiter of power. 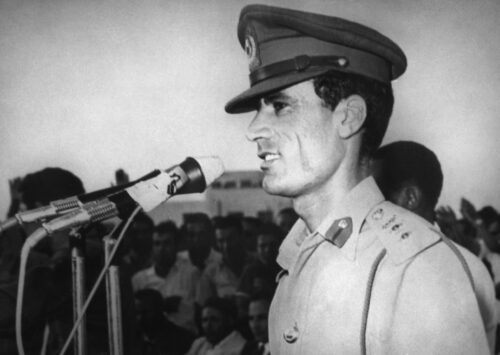 Muammar Gaddafi
Muammar Gaddafi did not come from an elite background. He was apparently born in 1942 in a tent in the desert near Sirte...