The 2011 revolt against the Gaddafi regime

The human-rights lawyer Fathi Terbil, representing the families of the Abu Salim victims, was arrested in Benghazi on 15 February 2011 after more than a month of protests that had broken out in the Cyrenaican cities of Benghazi, Bayda, and Derna about political corruption and the delay in construction of housing units. His arrest sparked the protest that led to the rebellion against Gaddafi. At the end of January, the government responded with a 20 billion euro fund for investment and local development. It also released a group of prisoners who belonged to the Libyan Islamic Fighting Group, hoping to ease tensions. But on 1 February a human-rights activist, Jamal al-Hajji, was arrested in Benghazi after calling, on the Internet, for demonstrations in support of greater freedoms in Libya, inspired by the revolutions in Tunisia and Egypt.

Propaganda for rebellion on the Internet continued, culminating in calls for a ‘day of rage’ against the regime on 17 February. Protests took place in Cyrenaica (Benghazi, Ajdabiya, Derna, and Bayda), as well as in Zintan in the Berber-dominated Jebel Nafusa, in the west. A rising in Misrata followed on 24 February 2011. These were brutally repressed, and the protesters became violent in their turn. On 20 February, Saif al-Islam Gaddafi made a long rambling speech that showed that his previous display of reformist liberalism had changed into outright support for reactionary repression. The government used aircraft to attack protestors; the 24 February rising in Misrata was almost crushed by airpower.

On 26 February the UN Security Council passed Resolution 1970 invoking Chapter VII of the UN Charter. This froze the Gaddafi family’s assets and restricted travel by the inner circle. It referred human-rights abuses to the International Criminal Court. On 27 February the Benghazi rebels formed a National Transition Council (NTC) to act as the ‘political face of the revolution’, and on 5 March it declared itself to be the ‘only legitimate body representing the people of Libya and the Libyan state’. Mahmoud Jibril was appointed to chair its executive board.

On 17 March UN Security Council Resolution 1973 declared a no-fly zone over Libya and authorized NATO-led air strikes to protect civilians, which provided cover for Libyan rebels to capture extensive areas, before they were forced back by Gaddafi’s better-armed forces. The rebels then asked various Western countries for arms. France, Great Britain, and the United States began aerial bombardments in support of the rebels. With this assistance, NTC forces pushed west across Libya, and other groups rose in the Jebel Nafusa region. The aid was particularly valuable in protecting Misrata, which was subjected to a fierce siege that began on 20 March. By late April, it was reported that over 1,000 people in the city had been killed and about 3,000 injured. NATO air support protected a maritime lifeline from Malta, and rebel forces lifted the siege by mid-May. On 29 March the main European governments, the US administration, and allies from the Middle East recognized the National Transitional Council as the legitimate government of Libya.

This began the final stages of the war, as NTC troops began an offensive along the coast, capturing the city of Tripoli on 21 August. Gaddafi and his close circle escaped to Sirte, which they announced as their new capital. His wife and three of his children fled to Algeria. Sirte was finally taken by NTC-aligned militias on 20 October, and Gaddafi was captured and brutally killed on the same day.

On 23 October the National Transitional Council, which the UN had recognized as the legal government of Libya on 16 September, announced the official end of the Libyan war. Even so, resistance continued in some areas, particularly Bani Walid. 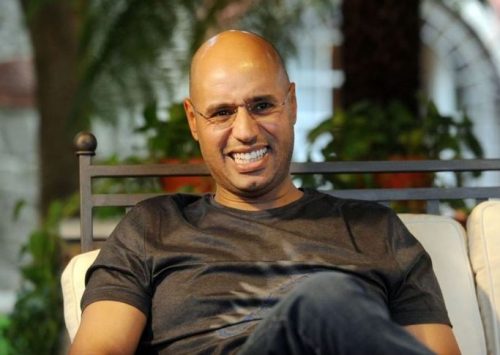 Qaddafi Son Released by Libyan Militia, His Whereabouts a Mystery
Saif al-Islam is trying to mobilize support among tribal leaders and fighters loyal to his father. Many Libyans perceive...