On 21 December 2019, the Turkish parliament ratified a deal to provide potential military support to the Libyan government. This marks the most overt entry of yet another regional or international power into the complex matrix of actors in the oil-rich state. Turkey’s commitment includes the option of a quick re-action force of Turkish troops that the Libyan government could request, but the agreement is vague on what exactly this means. While the Republican People’s Party (CHP), Turkey’s main opposition party, objected to the deal), President Recep Tayyip Erdogan’s government has given its full-throated backing to the bilateral agreement.

But where has this cooperation come from and where might it lead?

Since 2014, Libya has been roughly divided in two. The eastern half of the country’s Mediterranean coast has been dominated by the forces of General Khalifa Haftar, a military strongman and self-proclaimed anti-Islamist general aligned with Egypt and the United Arab Emirates (UAE). The western half of the country’s economically important coastline is largely ruled by the internationally recognised Government of National Accord (GNA). Headed by Fayez al-Sarraj, the GNAy has never obtained a strong military hold on the region but has enjoyed the legitimacy of international backing.

While the GNA controls the capital Tripoli, Haftar’s troops garrison the oil terminals and trade hubs of Benghazi and Derna. The coastal belt is the most populated part of the country and saw the fiercest fighting during the revolution against Muammar Qaddafi in 2011. During this new chapter of the country’s civil strife, the populated coastal region, home to Libya’s major cities, is still a key prize and fighting continues for the capital.

Yet Libya’s conflict has not been a purely internal affair. Regional powers have seized the opportunity to prop up their preferred actors and establish favourable relations with the future government of the world’s ninth largest reserve of oil. On one side, Russia has been a quiet supporter of Haftar, deploying mercenary forces to the country, while Egypt’s Abdel Fattah al-Sisi, also a former general, appears to see in warlord Haftar a kindred spirit. A fellow ex-military strongman may well appeal to the likes of Moscow and Cairo, to bolster their web of regional allies.

On the opposing front, the GNA has seen support from the likes of Turkey and Qatar (Western powers’ support has been largely diplomatic). Assistance from these two countries has largely come in the form of drones and armaments, so the prospect of ‘boots on the ground’ as well as intelligence sharing constitutes a major escalation. Turkey has sought to build relations with opposition groups in the wake of Qaddafi’s death, but divisions in recent years have offered new openings for Turkey to help a group towards power.

On both sides, details on what the support has entailed, aside from the evidence of military aid that investigations have uncovered, are thin. The precarious security situation in Libya has throttled much foreign reporting in the country and the limp grip of the rule of law has allowed a wide variety of criminal or unregulated activity to proliferate, not least the trade of vulnerable African migrants trying to reach Europe. There appears to be little chance of a flare-up between major powers over Libya. After all, years of contested proxy wars in Syria and Yemen (involving some of the same foreign powers as in Libya) have produced only rare international clashes. Turkey even seems to have pre-empted such tensions by ad-dressing Turkey’s conflicting interests with Russia in a December call with the Kremlin. No resolution ap-pears to have been forthcoming.

Haftar’s forces have largely been seen as the more militarily capable (and certainly ambitious) of the two sides. Backed by Egyptian and UAE airpower, according to the United Nations, Haftar-loyal troops have made several concerted pushes to seize Tripoli and, by virtue of holding the capital, take control of the country. GNA forces have managed to hold off these attacks, helped in no small part by the military sup-plies from foreign allies like Turkey. Not just a crutch to lean on in the diplomatic world, where allies like Turkey have been the most vocal friends of the Tripoli government, these regional powers have offered far more material assistance that may have ensured the survival of the GNA in the face of Russian-backed aggression. This latest deal may in fact play into this diplomatic battle, warning Haftar and his backers of the strength of wills on the GNA’s side. Even if Turkey never sends troops, this threat may be sufficient to make Haftar think twice as his forces continue to try and take Tripoli.

Just days after promising to use all Turkey’s ‘capabilities to prevent the conspiracy against the Libyan people’, referring to Haftar’s attempts to seize power, Turkey sent a ship directly to Tripolid. It was loaded with Turkish-made armoured personnel carriers for the GNA forces. Although such arms supplies defy a United Nations arms embargo on Libya, neither Turkey nor the GNA appears to have made much effort to hide the transfer. Turkey has also provided the Libyans with its domestically produced Bayraktar drone in at least three waves in 2019. While these domestically produced weapons systems are obviously convenient for Ankara to supply to its allies, their supply also serves the secondary goals of bolstering the Turkish defence industry (which has grown significantly under President Erdogan) and battle testing these new technologies to aid future sales elsewhere, potentially to a future Libyan unity government, if the GNA prevails.

Erdogan has also been offering up the possibility of sending Turkish troops to Libya since early December. Given the Turkish military’s commitments in northern Syria and Iraq, an additional deployment is no small undertaking and speaks to Ankara’s determination to see its preferred side prevail.

Turkey’s stance on who is the legitimate power in Libya is clear – it sees the GNA as the sole legitimate power and Haftar’s power as a coup – and it has not restricted its views to official government channels. State-run news agency Anadolu Agency has taken a similar tack, branding Haftar a ‘rogue general’ who is aiming for a ‘military dictatorship’. While many other news outlets have labelled the Libyan general a war-lord, Anadolu Agency’s wording is far stronger than most, surely reflecting the dominant political position towards Libya in Turkey.

In the television interview in which he announced the military deployment to Libya,t Erdogan clarified that Turkey would be paying all the costs associated with the mission. Such a valuable offer could scarcely be made without the prospect of real monetary compensation, given the current weak state of Turkey’s economy. Rather, it appears that this military move is a form of insurance for Turkey’s faith in the stability of the Tripoli government and also a material exchange of Turkish soldiers for Libyan oil rights. The two memoranda of understanding on oil and military cooperation that the Libyan and Turkish leaders signed in late 2019 appear to be very much a package deal. This may drag Libya into the growing Mediterranean tensions around Turkey’s aggressive hunt for undersea oil and gas. Greece has already declared the Turkey-Libya oil deal null and void, and Turkey has already proven willing to employ gunboat diplomacy to protect its interests. If its energy relations with Libya become more entrenched, Turkey may see value in dispatching its navy to protect the oil infrastructure and shipping tied to the GNA.

The signing of the deal between the two official governments of Turkey and Libya has had some immediate (albeit relatively muted) consequences. Coastguard forces loyal to Haftart stopped and searched a Caribbean-flagged vessel that was carrying an illicit cargo of small arms and briefly detained some Turkish crew. Both countries have announced investigations into the shipment, but with independent information in short supply the fog of war has settled on Libya, offering impunity to both local and foreign actors. With another power like Turkey in the mix, Libya looks no closer to peace in the post-Qaddafi era. 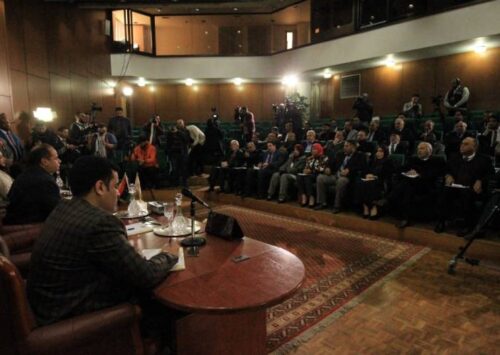 Turkey and Libya’s Maritime Deal: Partnership or Poisoned Chalice?
If Turkey is forced to drastically up its military commitment to Libya to combat Egypt’s support (beyond the recently ...