Education is compulsory from six to fifteen years. Secondary school begins at twelve years. In Libya, girls generally are educated longer than boys (ten years for girls and eight for boys), which is unusual for an Arab country. The average number of years of education received by people aged 25 and older is 7.3. At school entrance, a child can expect, on average, 16.6 years of schooling (UNDP). The combined gross enrolment in education for both sexes is 57.1 percent.

In 2002, there were more than a million boys and girls in public schools. Officially, there is no state kindergarten system, though private initiatives are present. More than 300,000 students were enrolled in universities, of which there are nine in Libya:

There are four higher institutes of technical learning:

Standards are not high: in the Ranking Web of Universities, the top-ranking Libyan university (Umar al-Mukhtar) is number 12,081. The majority of university teachers come from Egypt, Jordan, India, and the Philippines. A Libyanization policy was ineffective, because there were not enough Libyans with higher degrees. A further problem, also driven by nationalist considerations, was that of language: only Arabic could be used in street signs, and, in response to the US air strikes on Tripoli and Benghazi in 1986, English was forbidden to be taught. This created a major gap in the educational development of almost an entire generation. In 2005 the ban on teaching in English was lifted, causing a boom in language institutes. People who could afford it preferred to take language courses in Malta.

Despite a decreasing birth rate over the past forty years (see Family), nearly half the Libyan population is younger than thirty years. The lack of opportunity, high unemployment, and the advent of satellite television broadcasting daily life in other countries encouraged the participation of youth in the 2011 revolt. 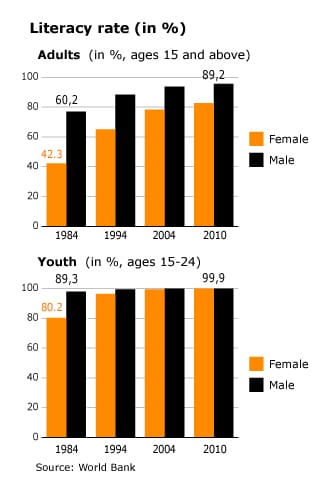 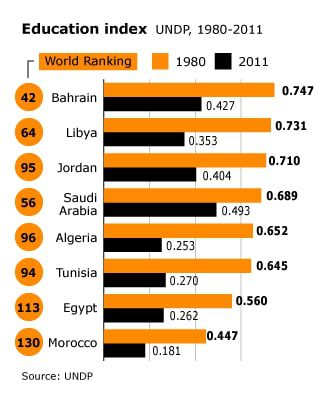