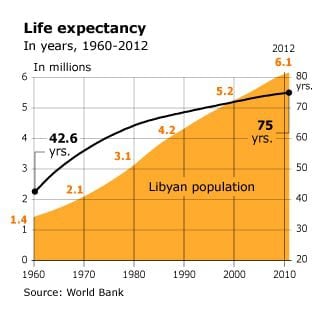 But the health system lacked investment. Public-health spending decreased from 5.5 percent of government expenditure in 1995 to 4 percent in 2010 and from 4.4 percent of GDP to 3.5 percent over the same period. The embargo contributed greatly to the neglect of hospitals and clinics. In 1997 there were 1.29 medical practitioners per 1,000 population. By 2009 this had risen to 1.9 per 1,000. Medical personnel used to be recruited from Arab and eastern European countries. Libyans preferred receiving medical treatment in Tunisia or Turkey. In 2010 the total health expenditure per capita was 713, 3.9 percent of GDP.

The mortality rate for children under five years is 17 per 1,000 live births for both sexes, which is low compared to the regional average of 68 and the global average of 57. World Bank data for 2012 estimated the average infant death rate at 13.

HIV is an increasing problem, particularly among immigrants from sub-Saharan African countries, where HIV infection is one of the main causes of death. By the end of 2006, the World Health Organization reported 10,450 people as HIV-positive, but experts estimate the actual number of HIV patients is much higher.