On 16 October 2019, Qatar announced reforms that would bring an end to the ‘kafala’ system, which is blamed for the perpetuation of abusive and exploitative labour practices. The question is whether the new measures are lip service or real progress, a question that has been raised in other parts of the Middle East where the system prevails.

Kafala, which means sponsorship in Arabic, is the system through which migrant workers are given a visa to work in a number of Gulf countries including Qatar. It ties workers to the employers sponsoring them, by requiring workers to get employers’ permission to leave the country or change jobs, a system that has lent itself to abusive and exploitative practices such as withholding wages or confiscating passports.

The United Nation’s International Labour Office (ILO) announced the end of the system in Qatar, which was confirmed by Prime Minister Abdullah bin Nasir bin Khalifa al-Thani, along with a number of other promised reforms.

Since Qatar won the bid to host the 2022 FIFA World Cup, the country’s labour practices have come under greater scrutiny, prompting the Arab state to work with the ILO towards reform. In addition to ending kafala, it has also introduced a non-discriminatory minimum wage, the first in the Middle East.

Qatar first announced it was abolishing the need for exit permits for non-domestic migrant workers last year as well as the NOC requirement (no objection certificate, whereby workers had to get their employer’s permission before changing jobs) as long as they had completed their contract or five years’ service if there was no defined contract length.

Stephen Cockburn, human rights group Amnesty International’s Deputy Director of Global Issues, said the group had “long called for the end of the abusive kafala system in Qatar, and it would be a major step forward if these measures finally allow workers to return home or change jobs without restriction”. He stressed that “the devil will be in the detail”.

“Far too often workers have continued to face exploitation and abuse despite reforms intended to protect them. We hope this time will be different, and that Qatar can truly transform its labour laws to fully respect the rights of its migrant workers,” he said. This would mean enforcing its labour laws more rigorously and holding those who abuse employees to account.

According to the ILO, the latest reforms were agreed unanimously by Qatar’s governing council of ministers. The next steps are for them to go through the advisory council and receive ceremonial approval by Sheik Tamim bin Hamad al-Thani, which is expected by January 2020.

Around 2 million migrants, mostly from the Indian subcontinent, work in Qatar as low-wage labour in industries ranging from construction to domestic service.

A report in September by Amnesty International revealed the precarious situation facing many of these workers and the struggles to get justice despite attempts at reform.

While harbouring exorbitant debts from recruitment agencies, working long hours, receiving little pay and living in sub-standard living conditions, the kafala system strangles workers’ ability to lift themselves out of exploitation through its restrictions. Furthermore, there has been no legal mechanism to address abusive employers.

Previous reforms attempted to redress this. In March 2018, a new committees system to settle labour disputes was introduced to replace previously ineffectual labour courts, under which a ruling would be provided within six weeks of a complaint so that remedies, such as paying missing wages, could be implemented more quickly. These improvements have worked for some but not all, and Amnesty International’s report highlighted hundreds of cases still pursuing justice.

Nepalese worker Deepak, for instance, won a case through the new committees but had still not received compensation a year after a ruling in his favour.

Another case involving Kenyan worker Dalia pursuing a complaint against the notorious United Cleaning company resulted in only 50 per cent of her wages being recovered, after a long legal battle. She told researchers she had to accept the offer because “we need money to buy our next job”, alluding to the high recruitment fees workers pay.

Language barriers, travel costs and lack of affordable legal representation also impact effective legal recourse. If companies do not participate in legal processes, there are few measures available to sanction them, and most embassies, according to Amnesty International, do not support workers pursuing claims after they return home. Fundamentally, however, there are too many cases for the committees to deal with and not enough judges.

Under the new rules, if a worker switches to a new employer during their probationary period, the new employer should take on initial recruitment fees. But the effectiveness of this lies in whether those recruitment fees will be transparently disclosed, and the organization warns that the practice of illegal visa trading could occur with costs passed on to the workers.

Details are also still to come on the non-discrimination or minimum wage, length of the probationary period and what concrete steps will be taken to enable workers to renew their own residence permits, avoiding falling into an illegal status and becoming liable for fines should their visa expire.

In an interview with Fanack, a spokesperson for the organization said, “Migrant labour conditions far extend beyond the kafala system,” and there needs to be improvements to the wage protection system, so workers do not go months without getting paid.

She added, “The new reforms seem to include domestic workers, but they are still not covered by the labour law, and the domestic workers’ law doesn’t provide equal protection and is not well enforced.”

While Qatar and the ILO are working towards better regulations, the spokesperson advised against calling the new announcements progress just yet.

“We need to assess how these reforms are actually being put in place, and ultimately how they’re impacting migrant workers,” she said, noting the gap between what is reported and what workers actually experience and that the country needs to do more to comply with international law.

The kafala system still persists in several other Middle Eastern countries, including Saudi Arabia, Kuwait, the United Arab Emirates, Bahrain, Oman, Jordan and Lebanon. According to a factsheet from Migrant Rights, many of them do not outlaw the recruitment fees or confiscation of passports.

Promises to end the system have already been made by some of these countries, including Saudi Arabia, which announced in May that it will end its kafala system. Bahrain became the first country to announce it would abolish it in 2009.

However, for Bahrain, the process to fully abolish the system has been lengthy since it enacted the 2009 Mobility Law, allowing migrant workers to switch employers without their sponsors’ permission if their contract stipulated notice periods of less than three months. The workers could also stay in the country legally for one month to look for work. However, this was undercut in 2011 by Law No. 15 that required workers to stay with their employers for one year before changing jobs, allowing the kafala system to prevail.

In 2016, Bahrain announced a flexible new permit so workers could act as their own sponsor, but this only applied to workers whose visas had expired, thus excluding many vulnerable workers.

Saudi Arabia, Migrant Rights said, has not made any meaningful moves. Saudi Arabia and Bahrain both have self-sponsored options now, but these are only available to high-income investor types, according to the organization, and Saudi Arabia will be the last country in the Gulf to require an exit visa if Qatar goes through with its proposed reforms.

“Throughout the region, we see a lot of tinkering with labour and immigration laws, some of which has been very important, but no real efforts to overhaul the system at large,” the spokesperson said. 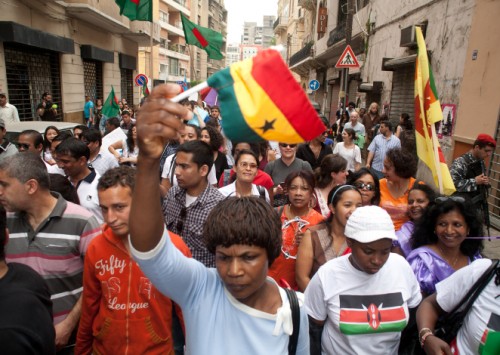