Morocco’s colonial legacy was a mixed blessing: French rule left an infrastructure consisting of 15,000 kilometres of roads, 1,600 kilometres of railways, and 35,000 hectares of irrigated land, and the phosphate industry exported 4 million tonnes a year, but 89 percent of Moroccans (including 98 percent of women) were illiterate, and most Moroccans held less than four hectares of unirrigated land.

Political leadership was disputed. The Istiqlal manifesto had called for constitutional monarchy, and the nationalist movement was closely identified with the king, as Mohammed V called himself after independence, but he was more popular than Istiqlal and was determined not to be overruled by it.

The nationalist movement was split between al-Fassi’s Istiqlal, Ouazzani’s PDI, and a new, largely Berber party, the Popular Movement (Movement Populaire). In 1959, Istiqlal split, and Mehdi Ben Barka formed form the Union National des Forces Populaires from its left wing. The King was able to fragment the nationalist movement. Morocco did not become a one-party state, but it was not a liberal democracy either. The regime was threatened by Arab nationalism, which opposed monarchs, Israel, and the United States, all of which the Moroccan regime viewed with favour. Prince Hassan negotiated an end to US bases in 1959, which fended off criticism, and in 1960 he became Minister of Defence and deputy Prime Minister. He succeeded his father in February 1961.

Hassan II (r. 1961-1999) oversaw the Moroccan Constitution and the first legislative elections. He manipulated the political parties, ruled the countryside through rural qaids (administrators), and controlled the army personally. He justified his actions by posing as a religious leader, Commander of the Faithful (amir al-muminin). This policy kept him in power for nearly forty years.

The first Constitution (18 November 1962) declared Morocco a monarchy ruled by the Alaouite family and its Commander of the Faithful. A multi-party parliamentary system fragmented the opposition, and effective opponents were heavily repressed. King Hassan’s chief of security, Mohammed Oufkir, a former French army officer, crushed protests ruthlessly, and, in 1965, organized the kidnapping and murder of Ben Barka, who was in exile in Paris.

The economic crisis was acute. The King continued to rely on capital-intensive and export-oriented agriculture, but production for the home market stagnated. Rural development was stalled, and in the mid-1960s, people began to migrate to Europe or to settle in the cities in the bidonvilles, where the informal sector grew. By the early 1970s, external debt was 23 percent of GDP and inflation 17 percent a year. Phosphates kept Morocco afloat.

To cope with protest, Hassan II’s second Constitution (1970) concentrated more power in his hands. In 1971, Oufkir crushed an attempted coup in a savage fashion, but in 1972 Oufkir was himself held responsible for a second coup attempt and died in obscure circumstances. His family, including very young children, were imprisoned for the next twenty years under harsh conditions. King Hassan’s new security chief, Driss Basri, was his right-hand man for the rest of his reign and responsible for determined repression. The opportunity to change the political environment came with the end of Spanish rule in the Sahara. 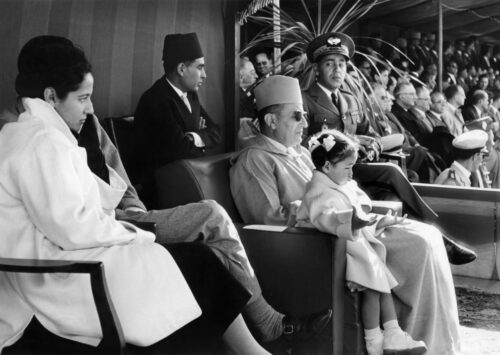 The Approach of Independence
Morocco did not achieve independence until 1956, eleven years after World War II.