Western Sahara is an area of 266,000 square kilometres of desert in North Africa that has been at the heart of a protracted dispute, mainly between Morocco and Algeria, with the latter supporting the separatist Polisario Front with bases and military aid. Morocco annexed Western Sahara in 1975 and controls 80 per cent of the former Spanish colony. The Polisario Front occupies the remaining 20 per cent.

The Polisario Front has long called for a referendum on self-determination, but Morocco rejects any other solution than autonomy under its sovereignty.

Tensions have flared at a time when the United Nations Security Council (UNSC) is debating renewing for one year the mandate of MINURSO, the UN mission monitoring a ceasefire in Western Sahara. A motion for a resolution on this subject and a vote is expected in late April.

In an unexpected move, Morocco announced that it is ready to intervene militarily against the Polisario Front. This raises the question: what has changed?

The recent tensions were occasioned by the Polisario Front’s 3 April incursions in the buffer zone near Guerguerat, on the border with Mauritania. Guerguerat is a no-man’s land where Moroccan and Polisario Front soldiers nearly clashed at the end of 2016.

To avoid escalation, Morocco called on both the UN and MINURSO to intervene and stop the Polisario Front’s illegal manoeuvres in the region. Meanwhile, Algeria refused calls from Morocco and the UN to cooperate in settling the conflict.

This is a new development, as Algeria has always avoided direct involvement and even stresses that it is not part of the problem. However, according to researcher Ahmed Bouchane, Algeria embraced, supported diplomatically and financed the Polisario Front’s manoeuvres.

Following the April incursions, Morocco warned the UNSC that Polisario Front fighters had entered the north-eastern city of Mahbes, in violation of a military agreement on establishing the buffer zone.

Omar Hilal, the Moroccan ambassador to the United Nations, stated in a letter that ‘several armed elements of the “Polisario” have entered this area, in military vehicles, and have pitched tents, dug a ditch and erected buildings with sandbags’.

Morocco sees Algeria’s involvement in the conflict as a challenge and blatant violation of international law as well as an insult to the credibility of the UN itself, which is aware of the facts on the ground.

Morocco has called for an urgent intervention of the UN and measures to prevent any attempt to change the status quo and to allow the separatist front to create an anomalous situation that could have disastrous consequences.

The latest development is the Algerian government’s open attack of Morocco, in blunt contradiction with its previous statements that the problem was between Morocco and the Polisario Front. Algeria is clearly exploiting the tension in Guerguerat to arm the Polisario Front in order to escalate the level of animosity in the region.

Algeria’s attitude is a blunt way of hiding its own diplomatic failures to block support for Morocco in the UN as well as in Europe and Africa. Many analysts see the departure of Christopher Ross (a former UN envoy to the region), who had clearly aligned himself with the Algerians in the conflict, as a blow to Algeria and the Polisario Front. Neither do analysts see the departure of Ban Ki-Moon and the appointment of Antonio Guterres as secretary-general of the UN as a positive development, given that the UN head is considered a friend of Morocco. Indeed, Ross had already notified the UN secretary-general of his decision to resign from his position as mediator before the end of his mandate, scheduled for the end of March.

Algeria’s actions are an attempt to impede Morocco’s endeavours to solve the Sahara conflict. It is also a way of ‘hiding’ the discontent and socio-economic malaise of the indigenous Sahrawi youth in the Tindouf refugees camps. For an anonymous Algerian political analyst, “Algerian security services have endured a tenacious rancour vis-à-vis the Moroccan political class since the years of civil war, and opposing the opening of the land border between the two countries, they doubly punish their Moroccan neighbour.”

The Algerian regime and Polisario Front are cornered and isolated because they have not garnered massive support. Their recourse to direct provocation and the threat of a new regional armed conflict is a desperate attempt to convince the UN and the UNSC to bring Morocco to the negotiating table. As for Morocco, its withdrawal from the buffer zone scored points.

A recourse to arms remains a possibility. The Polisario Front alone now assumes responsibility for potential aggression against people, most of them merchants crossing the Sahara on their way to Mauritania through Guerguerat. While Morocco has so far shown restraint in reaction to the offensives of pro-independence militias, a more vigorous response cannot be ruled out. “Morocco’s patience has limits,” hammered Ambassador Omar Hilal in a statement reported by the Moroccan News Agency. 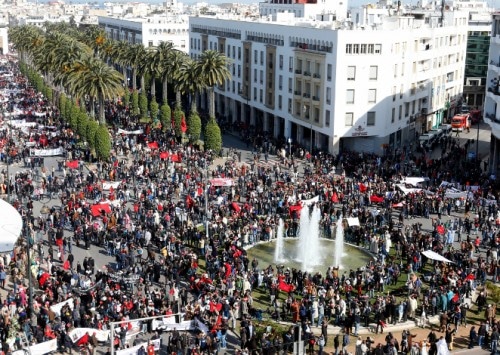