Fanack Home / Morocco / Past to Present / The Approach of Independence

The Approach of Independence

Morocco did not achieve independence until 1956, eleven years after World War II. For nearly all this time, independence was rejected by Paris, where governments changed with extreme rapidity, and fiercely resisted by the colons in Morocco. Mohammed V took a leading position in the movement. In April 1947 he visited Tangier and made several speeches about Arabic unity and Islam and its guarantee of justice. He praised the US government while attacking the French. The visit to Tangier showed how popular he was with Moroccans. The French tried unsuccessfully to control him by relying on their old agents, such as Thami al-Glaoui, the pasha of Marrakesh. Strikes led to attacks on Europeans, and some of the colons set up their own terrorist group. In August 1953, the French authorities deposed Mohammed V and exiled him to Madagascar. His replacement was an aged and unknown relative, Mohammed Ben Arafa.

Most Moroccans refused to acknowledge the new sultan, and protests and terrorism continued. The French government concluded that the war in Algeria, which had begun in 1954, was more important and prepared to abandon the Protectorate. After a conference in Aix-les-Bains in France in August 1955 Mohammed V was allowed to return.

On 11 February 1956, the French zone of Morocco became an independent state but the Spanish refused to return the northern and southern zones of their Protectorate to Morocco until April, and the Mediterranean territories, Ifni, and the Spanish Sahara were excluded. The international zone of Tangier was handed to newly independent Morocco in October 1956. 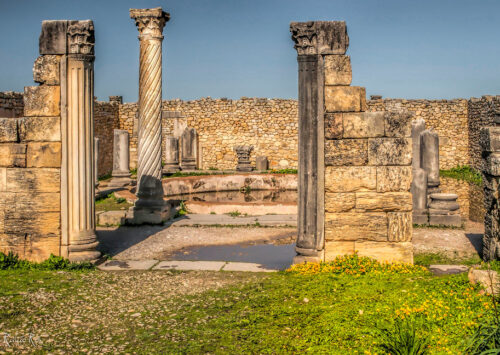 From Antiquity to Colonial Morocco
There are some physical remains of the early inhabitants of Morocco, such as the tools of the 'pebble people' at Sidi Ab...