It is difficult to identify a specific Moroccan brand of literature before the modern period. Historically, there was a deep tradition of scholarship in which writers born in Morocco and living there shared, but the subjects – law, religious commentary, philosophy, science – were the topics of a widerIslamic literature. Muslim writers of the classical age moved from place to place, while what would become Morocco was often part of a bigger political unit, as when Morocco was united with al-Andalus. Under the  Almoravids (1040-1147), the scholar and Qadi Ayyad ibn Musa was born in Ceuta and worked in Granada before being executed by the Almohads, and Ibn Bajja, an extraordinary polymath, who wrote about astronomy, botany, philosophy, and music, was born in Zaragoza, in Spain, and died in Fes (also known as Avempace). 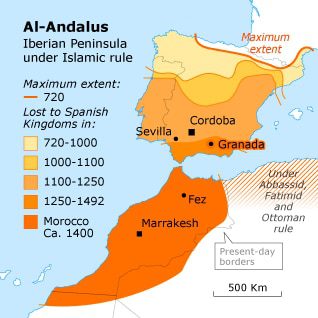 Although the Almohads (1147-1269) repressed their enemies, such as Qadi Ayyad, they also encouraged and sponsored scholars. The most famous was Abu al-Walid Muhammad ibn Ahmad Ibn Rushd (Averroës). He was born in Cordoba and died in Spain. Ibn Rushd was another polymath – in medicine, astronomy, mathematics, physics, theology, law, politics, music theory, and, above all, philosophy – whose commentaries on Aristotle were translated into Latin and had an important influence of mediaeval Christian scholasticism, but his works fell foul of the Almohads and were burned in public. Other Almohad scholars include Ibn Zuhr (1094-1162) a physician and surgeon, and Ibn Tufail (ca. 1105-1185), a philosopher and novelist. Ibn Tufail’s philosophical novel Hayy ibn Yaqzan tells of a child raised by a gazelle, who lived alone on a desert island, before making contact with civilization through another castaway. His ideas about the role of religion and reason in society found echoes in England after the book was translated in 1671, and they influenced the thinking of Daniel Defoe (1660-1731). Another famous philosopher of Jewish descent was Maimonides (1135-1204), whose Misneh Torah is considered a hugely authorative codification of Jewish law.

The Marinid dynasty proper (1215-1420) produced two men who typify this cosmopolitanism, Ibn Battuta and Ibn Khaldun. Ibn Battuta (1304-1377) was born in Tangier and became one of the greatest travellers of all time. He set out on the  hajj and spent most of the rest of his life travelling through Africa, the Middle East, South Asia, Central Asia, South-East Asia, and China, over a distance estimated at more than 100,000 kilometres. At the end of his life, he returned to Morocco and dictated his record of his journey, al-Rihla, to his secretary Ibn Juzayy. Ibn Khaldun was born in Tunis in 1332 and died in Cairo in 1406. He served as a state official in Fes, Granada, and Tlemcen and was a qadi in Cairo. His voluminous writings on history, including his famous Muqaddima, draw heavily on his experiences in state service as the basis for a theory of historical evolution that has been very influencial.

Neither Ibn Khaldun or Ibn Battuta wrote a specifically Moroccan literature: their philosophical and travel writings were much more a part of general Arab cultural movements, as were the works of poets such as Ibn Bassam al-Shantarini (d. 1147) under the Almohads, Ahmad ibn Abdallah Ibn Amira (d. 1259) under the Almoravids, and Ibn al-Khatib (d. 1374) under the Marinids. All three were born in al-Andalus. The same patterns existed under the Saadi sultans and the first Alaouis in the early modern period, but now a specifically Moroccan literature began to emerge in the form of local histories and biographical dictionaries.


The same patterns existed under the Saadi sultans and the first Alaouis in the early modern period, but now a specifically Moroccan literature began to emerge in the form of local histories and biographical dictionaries. Among the chronicles are the Nuzhat al-hadi bi-akhbar muluk al-qarn al-hadi of Muhammad al-Ifrani (1670-1745), and those of Muhammad al-Qadiri (1712-1773), both of which described tumultuous political events in a country riven by civil war. Other political theorists, such as Abu Ali al-Hassan al-Yusi (1631-1691), sought to explain the disorder and prescribe solutions; al-Yusi acerbically attacked Sultan Moulay Ismail as a tyrant. The high point of chronicle literature came with the huge history of Morocco, Kitab al-Istiqsa li-akhbar duwal al-Maghrib al-Aqsa (Book of Inquiry into the history of the Maghreb states), by Ahmad al-Nasiri, who was born in Salé in 1834 or 1835 and died in 1897, just as Morocco was losing its independence under European pressure. His description of the final stages of state collapse is vivid.

It was some time after the  Protectorate was imposed in 1912 before a modern Moroccan literature appeared. The literary generation that lived through  the Protectorate itself was small: only the poet Mohammed Ben Brahim (1897-1955), a native of Marrakesh, stood out, but his panegyric poetry for Mohammed V made him suspect to the French, and the analogous verses he wrote to honour Thami al-Glaoui made him a traitor in the eyes of the nationalists. The generation after independence saw the emergence of a genuine modern Moroccan literature, often of a strongly nationalist colour: Abdelkrim Ghallab (born in Fes in 1917), the editor of the  Istiqlal Party daily paper al-Alam who had studied at the University of al-Karaouine in Fes and at the University of Cairo, was a much-published and translated novelist. The official edition of his complete works runs to five volumes. A more conservative figure was the poet and scholar Mohammed al-Mokhtar Soussi (1900-1963), who was Minister of Religious Affairs under Mohammed V. In the late 1950s and early 1960s, Moroccan novelists began to publish, including Driss Chraïbi (1926-2007), whose most famous novel is Le passé simple (1954), and Mohammed Choukri (1947-1980). Choukri was an impoverished migrant from the Rif to Tangier, where he became the protégé of the American writer Paul Bowles, who was part of a group of expatriate writers living there in the 1960s (others were William Burroughs and Jack Kerouac). Choukri wrote his first books with Bowles’ help, and they were published first in English and only later in Arabic and French. Works include al-Khubz al-Hafi (For Bread Alone). Chraïbi, like many of his generation, published entirely in French.

An important influence on Moroccan literary life was the magazine Souffles, which began as a poetry journal in 1966 and eventually covered painting, cinema, theatre, essays, and other writing. It was banned in 1972, and one of its founders, the poet Abdellatif Laabi (b. 1941) was imprisoned, tortured, and exiled to France.

Tahar Ben Jelloun (b. 1944), whose earliest fictional work dates from the 1980s, also writes entirely in French. His novel La nuit sacrée (The Sacred Night) won the Prix Goncourt in 1987 and has been translated into more than 40 languages. His Cette aveuglante absence de lumière (This Blinding Absence of Light) won the International IMPAC Dublin Literary Award in 2004. In 2008, Ben Jelloun, who lives in Paris, was awarded the highest French decoration, the Légion d’Honneur.

Not all modern Moroccan literature is in French: there are several important writers in Arabic. Mohammed Achaari (b. 1951, in Moulay Idriss Zerhoun) has published short stories, poetry, and a novel, al-Qaws wa al-farasha, (The Arch and the Butterfly) that was joint winner of the 2011 International Prize for Arabic Fiction. Bensalem Himmich (b. 1948 in Meknes) is a novelist, poet, and philosopher. His novels Majnun al-hukm (Le fou du pouvoir) (1990) won literary prizes and al-Allama (The Polymath) (2001), a novel about Ibn Khaldun, won the Naguib Mahfouz Medal for Literature