Prior to French colonial rule in Morocco (1912-1956), the country’s media environment was a cosmopolitan blend of its regional environment and proximity to Europe. The first newspaper published in Morocco was the Spanish-language El Eco de Tétuàn in 1860. Over the next 50 years, this was followed by dozens of publications established by prominent social figures and printed in English, French, Spanish, Arabic and Hebrew, the latter catering to Morocco’s large Jewish community at the time. In 1914, a decree gave precedence to the French-language press while also banning the import of other regional publications, in an attempt to instil French values and identity in Moroccan society.

Local radio broadcasting, administered by the French authorities, began in Morocco in 1924. From the 1930s onwards, and particularly following World War II, the French government increasingly tolerated platforms for nationalist Moroccan radio broadcasters and newspaper publishers, as local and international sentiments grew increasingly hostile toward colonialism. In 1954, shortly before Morocco’s independence, the French government established the first television in the MENA region.

Morocco issued its first press code in 1958, formally regulating the media and requiring domestic newspapers to be registered and licensed by the government, while also establishing a national news agency, Maghreb Arab Press (MAP), in the same year. In 1962, Radio-Television Marocaine (RTM), later renamed Société Nationale de Radiodiffusion et de Télévision (SNRT) was established, and the country’s first terrestrial television channel was created. It remained the only channel in the country until 1989. During this era the cost of television proved prohibitive for many Moroccans and transmission was limited to roughly a third of the country. Radio broadcasts proved far more popular until the 1990s, with a 1973 study showing that 92.1 per cent of Morocco’s adult urban population and 75.2 per cent of the rural population regularly listened to the radio.

In 1989, 2M TV became Morocco’s first private terrestrial channel and quickly gained popularity as an alternative to RTM programming. However, it soon faced competition with the introduction of satellite broadcasting. The government subsequently acquired a majority share in the channel after it began to suffer financial difficulties. Satellite television soon became widespread among Moroccans and had reached a penetration rate of 70 per cent of households by 2007.

The internet was first introduced publicly in Morocco in 1995 but was initially slow to take off due to high costs and poor infrastructure. Over the past decade in particular, internet access has become far more widespread and popular, to the extent that Morocco’s internet penetration now exceeds all of its North African neighbours.

Morocco’s media environment became less state-dominated by the end of the 1990s, in line with the country’s efforts to liberalize politically and economically. The media became more reliant on markets than government funding, which allowed for a greater degree of free speech. After King Mohammed VI ascended the throne in 1999, efforts were made to further liberalize the media. The press code was revised in 2002 to reduce penalties for journalistic offenses and in 2004 seven journalists who had been imprisoned for such offences were pardoned.

Despite this short-lived liberalization process, however, the Moroccan media environment is still largely subservient to government and monarchical control. The government continues to use advertising and subsidies as incentives for media cooperation while failing and fining those who openly oppose it.

Despite this short-lived liberalization process, however, the Moroccan media environment is still largely subservient to government and monarchical control. The government continues to use advertising and subsidies as incentives for media cooperation while failing and fining those who openly oppose it.

Morocco ranks 131st of 180 countries in Reporters Without Borders’ 2016 World Press Freedom, with the organization remarking that media freedom in the country is ‘deteriorating slowly but surely’.

In response to pro-democracy demonstrations and the events that unfolded across North Africa in 2011, Morocco held a constitutional referendum and subsequently published a new constitution, Article 25 of which states that: ‘The freedoms of thought, of opinion and of expression under all their forms[,] are guaranteed.’ However, despite this constitutional provision, Morocco still practices laws that directly contradict freedom of expression. The press code still allows for journalists to be jailed and fined for their reporting, and although a 2016 redraft (still to be implemented) is widely considered an improvement, there are still significant obstacles to media openness in the country.

Self-censorship is prevalent as journalists continue to avoid negative coverage of the monarchy, Islam and the disputed Western Sahara region, for fear of reprisals. Violence against media figures is relatively rare compared to neighbouring countries, but intimidation tactics have become increasingly common since 2014, as part of a wider crackdown on the opposition voices that have emerged since 2011. In 2015, Moroccan authorities issued public warnings against human rights groups and interrogated several members on charges of ‘fabricating reports to undermine the security apparatus and destabilize the country’. The Committee to Protect Journalists reported a 2015 ‘wave of defamation cases’, particularly against news websites, resulting in fines and the closure of certain outlets.

The Moroccan authorities have also targeted foreign media outlets in recent years. In 2010, the government removed all accreditations for al-Jazeera employees operating in the country, thereby closing down the network’s Moroccan offices until April 2013. In January 2016, seven journalists were put on trial after participating in a foreign-funded training programme hosted by Dutch NGO Free Press Unlimited on the use of smartphones and citizen journalism. The  charges brought against them were ‘undermining state security’ and ‘failing to report foreign funding’. Journalists filming a documentary for France 3 on Morocco’s social and economic conditions were deported in early 2016, and a France 24 TV crew was prevented from filming.

Journalists are also increasingly facing heavy-handed government tactics when covering the issue of terrorism and religious extremism in Morocco. In 2013, Ali Anouzla, editor-in-chief of news website Lakome2 (which replaced its banned predecessor Lakome), was arrested for posting a link to an El País article referring to content published by al-Qaeda in the Islamic Maghreb (AQIM). Anouzla was charged with ‘defending terrorism’ and ‘inciting the execution of terrorist acts’ and was imprisoned for five weeks before being released on bail. As of November 2016, his case remains open and he can still be jailed for anything from ten to 30 years.

Television in Morocco is the most popular source of information and entertainment. A 2009 study conducted by French television ratings measurement company Médiamétrie concluded that the average Moroccan watches 3.75 hours of television per day. In the same year, the International Telecommunication Union (ITU) estimated that 95.8 per cent of Moroccan households owned a television set. Morocco currently offers nine domestic channels, seven of which are state-owned, whereas the other two have hybrid ownership structures.

The main domestic television channels are as follows:

Pan-Arab broadcasters are popular in Morocco as in the rest of North Africa. A 2011 Ipsos survey conducted in conjunction with the Dubai-based Arab Media Forum, found that MBC2 and 4, along with al-Jazeera, occupied three of the top five most popular television channels in Morocco. However, 2M TV remained the most popular by a considerable margin.

Radio is the second most popular media platform in Morocco behind television. The ITU estimates that 79.4 per cent of Moroccan households owned a radio set in 2005. Radio plays a particular role in that it caters to sections of society that are unable to access other platforms. Illiteracy is high, with UNESCO reporting that just under 33 per cent of the adult population were illiterate in 2011. Furthermore, Open Society Foundations claim that only 40 per cent of the population understands formal Arabic, and 10 per cent understands formal French, both of which are used in most state television broadcasts. Radio broadcasts in contrast tend to be more locally focused, using regional dialects.

Unlike television broadcasting, the Moroccan radio environment has numerous private outlets as well as a considerable state presence. The most popular stations in the country are as follows (all private except the majority state-owned Radio 2M):

Newspapers in Morocco struggle to gain wide readership owing to the country’s high illiteracy rates. Total newspaper circulation in the country of 33 million (2011) was estimated at 320,000 copies per day, meaning that less than one per cent of the total population reads a newspaper on a daily basis. Furthermore, in 2016, Morocco passed a law preventing the sharing of newspapers in public spaces, further stifling the reach of the print industry.

Nevertheless, independent publications have been able to secure a degree of autonomy in this sector, and the press environment is considerably more diverse than broadcasting. As with other North African press environments, Arabic-language publications tend to have the highest circulation, whereas French-language newspapers hold a more esteemed status.

As online penetration rises, the internet is becoming increasingly popular in Morocco. However, there is still a significant difference in access between urban and rural populations, with penetration rates standing at 67 and 43 per cent respectively. Social media is now a major means of communication and news consumption, particularly for young Moroccans.

As with the rest of North Africa, Facebook is by far the most popular social networking site in Morocco in terms of active users. Its usage has grown significantly in recent years, with 860,000 registered users in 2009, increasing to 5.1 million in 2015. The video-sharing platform YouTube is also very popular, and receives more daily visits than Facebook.

The origins of the 20 February 2011 protest movement are widely credited to social media, but in recent years Moroccans have tended to use online social networks as an outlet for whistleblowing rather than calling for protests. One notable case came in 2014, when classified documents from the Ministry of Foreign Affairs were leaked via Twitter and subsequently authenticated, suggesting that Moroccan authorities had offered incentives to foreign media outlets in exchange for positive coverage.

Moroccan authorities rarely block access to social media websites but they do pursue social media users who post unfavourable content. In 2014, a Moroccan rapper was jailed for four months after his YouTube music video depicting unemployed youths in Casablanca was deemed ‘harmful to public morality’. In January 2016, a young Moroccan named Abderrahman El Makraoui uploaded a YouTube video complaining about the state of his municipality’s roads. He was subsequently arrested and sued for defamation, prompting an online solidarity campaign. He was finally acquitted in March 2016.

Privacy International, a UK-based digital freedom NGO, reports that online surveillance is widespread in Morocco, either through dedicated groups of pro-government hackers or spyware systems installed on computers.

Online publications have become popular in recent years as a relatively independent alternative to traditional Moroccan media. The government has attempted to curb the independence of this sector through Articles 34 and 35 of the 2016 revised press code, which declare that online news outlets must register Moroccan domain names in order to be eligible for press credentials and state support. Some of the most popular online publications include: 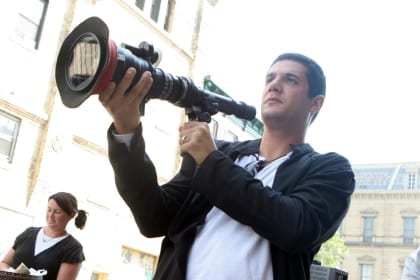 Hollandse Hoogte/Nick Hannes ©Hollandse Hoogte
Hollandse Hoogte/Nick Hannes ©Hollandse Hoogte
"Ignorance leads to fear, fear leads to hatred, and hatred leads to violence.
This is the equation."
IBN RUSHD/AVERROES (1126 – 1198)
We are a Dutch not for profit organisation (NGO), financed solely by individuals who share our belief in the importance of publishing and disseminating reliable, unbiased information on the Middle East & North Africa region. To represent the voice of the region’s people, we carefully echo the region’s heartbeat by offering fact-checked and therefore credible information.
Your support is greatly appreciated and helpful!
Donate