Historically, Moroccan society was centred on a patriarchal extended family, including the nuclear family of parents and siblings, as well as relatives by kinship and marriage. This was a concomitant of the tribal structure of rural society. In recent years, urbanization, economic factors, and migration have disrupted these patterns, although they retain the strength of normative values.

Between the late 1970s and the early 1990s, the total fertility rate (TFR) in Morocco declined by 44 percent, a rapid decrease compared, for example, with Egypt. One reason was that the median length of time between births increased, as the wish among Moroccan women for large families decreased: the size of the ideal family in a survey of Moroccan women declined from 5 children to 3.7. This became a realizable desire because of the growing availability of contraception, which increased from 19.4 percent of women aged 15-49 in 1980 to 41.5 percent in 1992 to 63 percent in 2004 (World Bank World Development Indicators). Another factor was the increase in the mean age of marriage between 1971 and 2004, from 19.1 years to 26.4 years for women and from 25 years to 31.2 years for men (UN World Marriage Data 2008). This change was influenced by gains in female education and by the economic difficulties of saving enough money to marry. 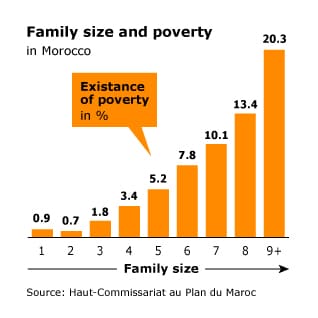 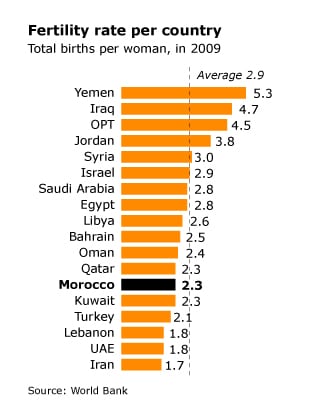