The improvement in health is due partly to large-scale vaccinations and other preventive measures. The Ministry of Social Affairs is in charge of vaccinations, medicine, and maternity care. Contraceptive prevalence is 64 percent of all women aged 15-49 (2004 figures), and 68 percent of pregnant women receive prenatal care. The fertility rate is 3.5 per female, and 63 percent of births are attended by skilled health staff (2004 figures). The Ministry of Education administers a preventive medicine and dentistry programme for school children; 99 percent of children aged 12 to 23 months receive the DPT vaccination. Another factor is the general improvement in infrastructure: most Moroccans have access to clean drinking water, 98 percent of the urban population has access to an improved water source (although only 61 percent of the rural population have similar access), and most people have enough to eat (five percent of the population was undernourished in 2008). There has been a campaign against smoking, which is prohibited in public buildings and on public transport; 33 percent of males smoke, fewer than in many comparable countries (e.g., Jordan 47 percent, Egypt 40, Tunisia 58). The most frequent causes of death are circulatory problems (24 percent in 2009). The most serious infectious disease in 2010 were tuberculosis, with an incidence of more than 27,000 cases (83 per 100,00 inhabitants), and leishmaniasis (spread by the bite of a sandfly), with nearly 9,000 cases (28 per 100,000 inhabitants). In the same year 460 cases of AIDS (1.4 per 100,000 inhabitants) were reported.

Health expenditures total 5.1 percent of GDP (2010 figures), of which 37.9 percent is public health expenditure. Private health expenditure totals 3.2 percent, which is high, compared with the average for Arab states (1.7 percent, Tunisia 2.8, Jordan 2.6). The number of doctors and paramedics in the public sector has fluctuated considerably over the past few years, with a steep fall between 2005 and 2007 and a steep rise after 2009. In 2010 there was one bed for every 1,178 inhabitants and one doctor for every 1,630 people. Specialists made up 42 percent of physicians, but they were unequally distributed, by both specialization and region: in 2010, there were 492 gynaecologists in all of Morocco but only 155 neuropsychiatrists, of whom 90 were in the Rabat-Casablanca region, 16 in the large region centred on Marrakesh, and none at all in the Saharan provinces. 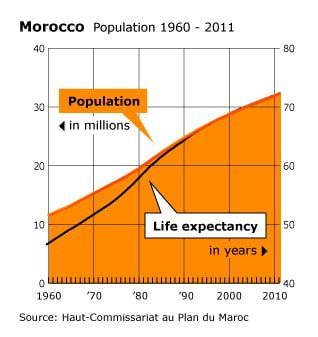 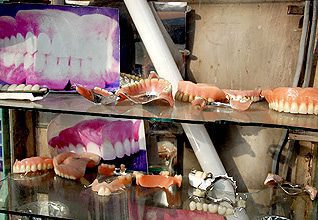 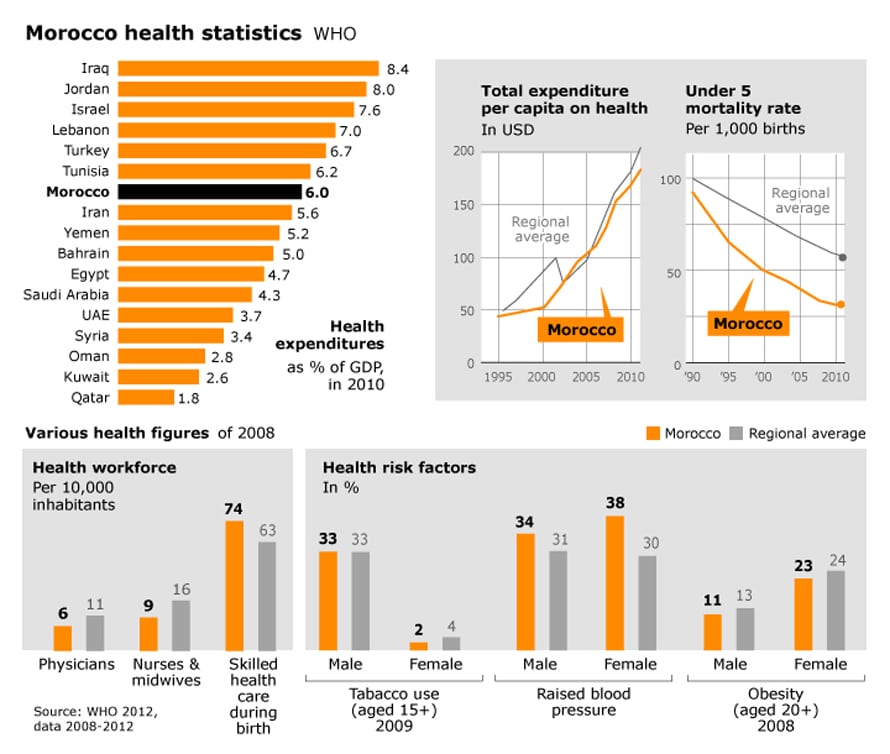