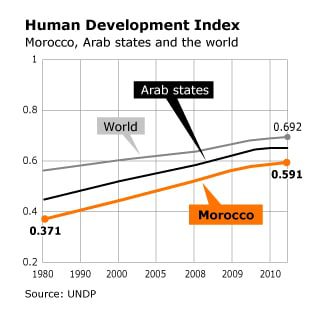 Morocco scores poorly on some poverty indicators—such as the Human Poverty Index (0.139) and the adult literacy rate (56.4)—but much better than some countries on other indicators (2.8 percent of the population without electricity, compared with 7.1 percent for Syria). There has been an improvement in many factors over the past thirty years: life expectancy, for instance, increased from 57.7 years in 1980 to 72.2 in 2011.

Morocco’s score is low in international terms (0.693) on the gender-related development index (GDI), ranking it at 104, immediately below Syria and immediately above Zimbabwe. It is marginally below the average GDI for the Arab states in 2010 (0.699).