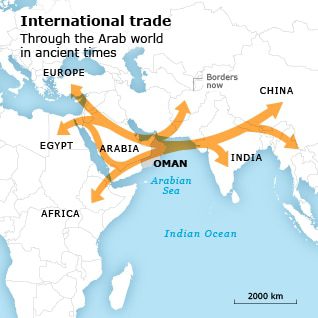 Throughout history the international trade network has provided Oman’s population with a supplementary source of income. This was particularly important because agriculture and pastoralism, which constituted the mainstay of the local economy, were hampered by the harsh climate, limited water resources and lack of arable land.

The country, like the rest of the Arab world, was at the crossroads of the main intercontinental trading routes, which had existed in this part of the world since ancient times. The Arab world functioned as a large zone of passage along these trade routes that connected three world civilizations: Europe, Africa, and Asia. Its population acted mainly as middlemen. However, the dependence on the wealth and demands of other civilizations directly affected the rise and decline of the economies in this region.

Oman fulfilled an intermediary function primarily in maritime trade. Merchants in Oman were involved in the caravan route overland across the Peninsula. Bedouins from Oman and neighbouring countries were responsible for camel transportation. 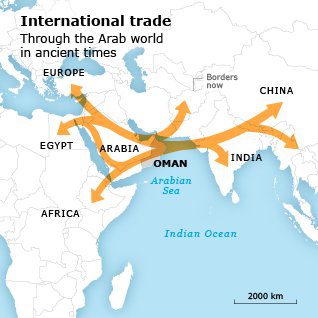 Omani ports
Omani ports profited from their strategic position mainly because they were located along two main routes connecting Eas...