Fanack Home / Oman / Past to Present / Sultan Qaboos Is Back, but Uncertainty Remains

After spending eight months at his residence in Germany to undergo medical treatment for what was claimed to be cancer, Sultan Qaboos returned to the sultanate on 23 March 2015. Omanis have long been in doubt about what exactly Qaboos is suffering from and how he has been progressing. Omani authorities, including the sultan himself, have been trying to reassure Omanis of his good health, but the fact that he has been out of Oman for so long is not at all reassuring. The uncertainty over his health sparked speculation about who might succeed the sultan, in the event of his death.

Soon after news broke that the sultan had arrived at Muscat International Airport, Omanis expressed joy on social media and in the streets. State media broadcast endless footage of citizens taking to the streets to express their joy. For the time being, Omanis are relieved, but uncertainty over his inevitable succession remains, while Oman faces several social and economic challenges.

While recent power transitions have taken place smoothly in Qatar and Saudi Arabia, Oman, led by 73-year-old Sultan Qaboos for the past 44 years, might soon experience a more turbulent succession.

The monarchies of the region—which (except Bahrain) have largely escaped the Arab uprisings—have generally experienced predictable power transitions. In June 2013, Hamad bin Khalifa Al Thani, the emir of Qatar, handed over power to his son Tamim, who had been groomed to lead the country. The new king of Saudi Arabia, Salman bin Abdulaziz, had also played a significant role in politics as crown prince; immediately after the death of King Abdullah in January 2015, Salman was appointed his successor.

But Oman is different. Since the accession of Sultan Qaboos to the throne in 1970, development of the country has been narrowly centred on Qaboos himself. Qaboos has served effectively as head of state, prime minister, minister of defence, and finance minister and has refused to appoint even a prime minister. Unlike other Gulf Cooperation Council rulers, the sultan has not appointed a crown prince and thus has no obvious successor.

The majority of Omanis have known no leader other than Qaboos. History is divided into two periods, pre-Qaboos and post-Qaboos. Official discourse emphasizes the nahda (renaissance) of 23 July 1970, when Qaboos overthrew his father, Said Ibn Taimur; since then, Omani history has been linked to Qaboos alone. All institutions, buildings, and streets of national importance are named for him, from Sultan Qaboos University and Sultan Qaboos Street to Sultan Qaboos Grand Mosque. Oman’s National Day is the sultan’s birthday.

Qaboos has always relied on the business elite, while excluding members of his own family from important positions, thus preventing them from challenging his authority. While members of the royal family have become active in business and have acquired important assets, they hold only minor government positions. Consequently, no one has been groomed to succeed Qaboos. The result is an unclear future.

There is a procedure for appointing a successor to Qaboos, but it is untested. Oman’s Basic Law of 1996 requires that the successor be a male descendant of Qaboos’s great-great-grandfather Sultan Turki bin Said bin Sultan (r. 1871-1888). Article 6 of the Basic Law stipulates that, within three days of the position becoming vacant, the Ruling Family Council must choose a successor; if no successor is agreed upon, the Defence Council shall, together with the chairmen of the Consultative Council and State Council, confirm the appointment of the person designated by the sultan in his letter to the Family Council. According to Marc Valeri, Senior Lecturer in Political Economy of the Middle East at the University of Exeter (UK), the complexity of this process and the central role of the circle of men involved, all from outside the royal family, raise questions. Given the fact that the Ruling Family Council has probably never met and might not be able to come to a decision, it is uncertain whether it will accept such a major decision by individuals who do not belong to the Al Said family and owe their position solely to Qaboos. In the absence of Qaboos, there is no senior figure of the Al Said family who can supervise the process and contain any disagreements.

Officials who have gained prominence over the years, such as Yusuf bin Alawi bin Abdullah (Minister Responsible for Foreign Affairs) and Sayyid Khalid bin Hilal (Minister of Diwan of the Royal Court), will be ineligible to succeed Qaboos, as they are not members of the royal family.

The three candidates most likely to succeed Qaboos are the sons of his uncle Tariq bin Taimur, who was prime minister briefly in the 1970s. Former Brigadier General Sayyid Asad bin Tariq (b. 1954), like Qaboos a graduate of the Royal Military Academy Sandhurst (UK) and the personal representative of the sultan since 2002, previously commanded the sultan’s armed forces. He runs several companies, and his investment company is said to control more than $1 billion in worldwide assets. His son Taimur (b. 1980), married to Salma bint Mustahil al-Maashani, daughter of Qaboos’s maternal uncle, is considered his generation’s leading candidate for the succession. Sayyid Haitham bin Tariq is Culture and Heritage Minister, owner of a real-estate company, and leader of the Oman Vision 2040 strategy. Shihab bin Tariq is chairman of the Research Council, adviser to the sultan, and former commander of the Royal Oman Navy.

Because of Qaboos’s policy of keeping his family members away from power, these men have limited experience and are not well known. In any case, Qaboos’s successor will have, somehow, to win the legitimacy of his predecessor. Moreover, the fact that the current sultan holds absolute power over the executive, legislative, and judicial branches raises the question whether his successor will continue to hold onto these powers or will separate them. Valeri argues, in light of the frequent demands for reform that surprised the authorities from 2011 onwards, that young Omanis will not grant the ruler the same grip on power as the older generation did.

Protests seemed to vanish in 2011, but demonstrations against unemployment, corruption, and the slow pace of reforms re-emerged in 2012 and 2013 in and around Sohar, in northern Oman. Oil workers in several oil fields in the interior staged a strike in May 2012 to demand better working conditions. Some 35,000 teachers held a four-week strike in October 2013, unprecedented in the country. In addition to partly satisfying the strikers’ demands, the minister of manpower issued a resolution prohibiting strikes at establishments that provide ‘essential public services’, like oil facilities, ports and airports.

The response to the 2011 protests, including the creation of thousands of new jobs and the dismissal of corrupt officials, were clearly not enough to silence or satisfy Omanis.

Meanwhile, the crackdown on activists, writers, and bloggers continued. According to the Gulf Centre for Human Rights, Omani authorities, as of March 2015, continue systematically to target human-rights defenders and online activists, including sentencing them to jail on what are alleged to be fabricated charges. On 18 March 2015, the Court of First Instance in Salalah, in southern Oman, sentenced writer and online activist Said al-Darodi to one year in prison on charges of “disturbing public order” and another six months for “creating discord and hatred.” Earlier, al-Darodi had disappeared after he was summoned to the police in Salalah; it is believed that he was detained incommunicado, without access to his family or a lawyer. On 8 March, prominent human-rights defender Said Jadad was sentenced to three years in prison on charges related to freedom of expression. Jadad was arrested in July 2013, even though the sultan had, a few days earlier, ordered the release of everyone who had been sentenced and imprisoned for political reasons.

The recently enacted Citizenship Law, which prevents courts from hearing complaints regarding citizenship issues and instead puts the Interior Ministry in charge of such decisions, has sparked concerns, as it is believed that the law may be used to target human-rights defenders and activists.

Whether or not the sultan dies any time soon, challenges remain. Like other GCC states, Oman has been, and remains, highly dependent on non-nationals for its economic development. Although (or because) education has developed rapidly in recent decades, Oman is now struggling to employ its university graduates. The government created 50,000 new jobs after the 2011 protests, but this rate of job creation is not sustainable, given the already saturated public sector. At the same time, Omanization of the work force has had little effect. The Oman 2020 Vision aimed at a rate of 75 percent of nationals employed in the private sector, but, as of February 2015, Omani nationals constituted only 13 percent of the private-sector workforce, according to figures of the National Centre for Statistics & Information. Companies have been assigned quotas of nationals to employ, but a lack of training and more attractive labour conditions in the public sector have attracted Omanis away from private companies. Creating new jobs in the public sector and increasing minimum wages for nationals has had the unintended effect of making employment in the private sector less attractive.

According to Marc Valeri, the personal involvement of most influential decision-makers and cabinet members in business has fuelled the widespread perception of an elite busy safeguarding its own interests instead of prioritizing national interests such as Omanization. This is the result of the sultan’s alliance with merchant families who have privileged access to the oil revenues through public contracts, in return for helping the sultan to finance his nation-building endeavours. While the sultan has never questioned this system, continuing calls for reforms indicate that Omanis want change.

Since mid-2014, the Omani economy has been under increasing pressure from declining oil prices. This poses a risk because, despite efforts to diversify the economy, hydrocarbons still produce 79 percent of government revenues and more than half of Oman’s exports, according to MEED. The government projects a budget deficit of 8 percent of gross domestic product (GDP) at the end of 2015; the ratings agency Moody’s changed Oman’s outlook from stable to negative, based on lower oil prices, projecting a budget deficit of 11 percent of GDP.

Despite falling oil revenues, Oman early in 2015 published a record budget of $36.7 billion for 2015. It maintains high social spending and a commitment to investment in infrastructure to boost diversification and develop tourism, logistics, and industry, but high social spending, coupled with a huge subsidy bill (for fuel and other utilities) of about 13 percent of total spending is no longer sustainable. The government has considered cutting subsidies, but the Shura Council has voted against such a move, because doing so might create popular unrest. The government is considering introducing levies and taxes, such as a corporate tax, to increase its revenue base. Introducing a personal income tax would probably be a bridge too far, as it would undermine the relationship between state and citizen typical of the Gulf states. 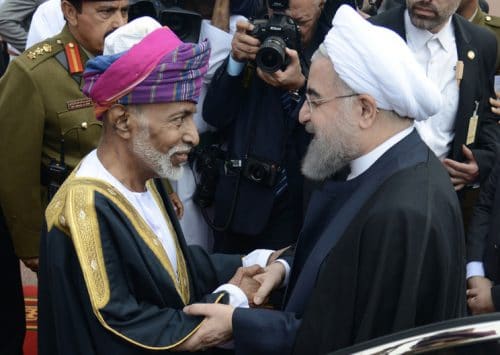 Neutral Oman Braces for Challenges Ahead Amid Sultan’s Ailing Health
The ruler, now 76, is ailing and has spent months at a time in Germany receiving cancer treatment. Nevertheless, Oman ap...

Please contact us in case of omissions concerning copyright-protected work. The acquired copyright protected images used on/as featured image of this page are: ©Monitor of Human Rights in Oman

©Monitor of Human Rights in Oman