Since Sultan Qaboos came to power in 1970, education has been one of the spearheads of government policy. In 1970, Oman had an illiteracy rate of about 80 percent. In 2009, the overall literacy rate was 84.4 percent for adults, and 98.4 percent for people between 15 and 24 years of age. In 2009, public expenditure on education accounted for 4.5 percent of GDP, or 26 percent of total government spending.

The country has a public system that provides free education to Omani citizens up to secondary level. However, the percentage of Omanis aged 18-24 years of age in higher education is a mere 19 percent. This is relatively low in comparison to most other equally developed countries, where this percentage is between 60 and 70 percent. One of the goals is to increase this percentage to 50 percent. Pre-primary school enrolment (figures for 2007) is 19 percent, in primary schools 73 percent, in secondary schools 79 percent and in higher education 19 percent.

Oman has been successful in its bid to incorporate females in the educational system. A study on learning achievements for grade 4 and grade 6 students found no significant difference in achievements among gender groups. Female students significantly outnumber males in a number of academic fields, including science. Moreover, 59 percent of students studying abroad are female. 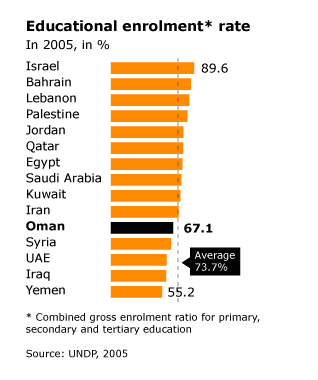 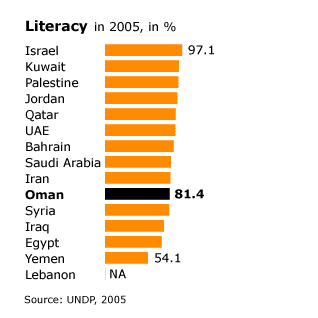