Bethlehem (Bayt Lahm, House of Bread), 10 kilometres south of Jerusalem, is renowned as the birthplace of Jesus of Nazareth and site of the Church of the Nativity – one of the most important pilgrimage destinations in the world. For this reason, for centuries, Bethlehem was inhabited by a Christian population. This changed in 1948 with the influx of thousands of refugees. Since then, the city has merged with the neighbouring villages of Beit Jala (Bayt Jala) and Beit Sahour (Bayt Sahur). It forms the largest concentration of Christian Palestinians in the West Bank. 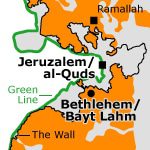 Since the middle of the 19th century, religiously motivated tourism has become an important source of income. In the build-up to the 2000 Millennium Celebrations – anticipating the huge inflow of pilgrims – the city was given a substantial facelift, with large parts of the historic centre renovated. However, in that same year the Second Intifada threw a spanner in the works. The introduction of restrictive measures by the Israeli occupying forces, and the dangerous situation in general, put religious tourism under severe pressure.

Bethlehem’s economic position as the regional centre has been further undermined as a result of the erection of the 8-metre high Wall, which has also led to land dispossession. The grim area surrounding Rachel’s tomb (Qubbat Rahil; the biblical patriarch Jacob’s wife), which had been annexed by Israel in 1997, was sectioned off from the West Bank by the Wall in 2002. In the areas where the Wall is directly adjacent to houses and shops belonging to Palestinians (blocking their view entirely), the social and economic life has come to a complete standstill.