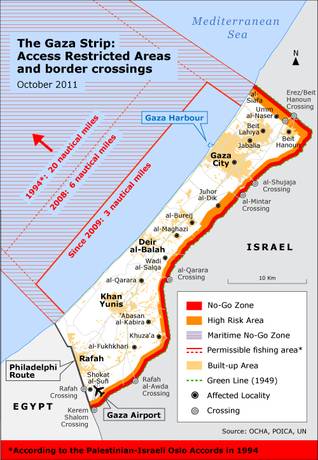 Israel and Egypt increased pressure on the Gaza Strip by closing the border crossings. The import of bare necessities has since stagnated, placing Gaza’s 1.6 million inhabitants’ well-being under severe duress. A report issued in October 2011 by the UN Office for the Coordination of Humanitarian Affairs (OCHA) stated that the Gaza blockade by land, air and sea ‘is a denial of basic human rights in contravention of international law and amounts to collective punishment. It severely restricts imports and exports, as well as the movement of people in and out of Gaza, and access to agricultural land and fishing waters. Gazans are unable to provide for their families and the quality of infrastructure and vital services has deteriorated’. In response to the blockade, the Palestinians dug hundreds of tunnels under the border with Egypt – the 15 kilometres long ‘Philadelphi Corridor’. Experts estimate that about 80 percent of the goods supplied enter the Gaza Strip by this route.

After Israel had violated the ceasefire in November 2008, Hamas refused to renew its ceasefire agreement with Israel. Hamas and other resistance groups began to fire Qassam rockets (named after Izz al-Din al-Qassam) at population centres in the south of Israel, in an attempt to break the stalemate. For Israel, this was reason to carry out a large-scale military offensive in the Gaza Strip (‘Operation Cast Lead’) between the end of December 2008 and mid-January 2009. According to Palestinian and non-Palestinian sources this operation resulted in the deaths of about 1,400 Palestinians (of whom 83 percent were civilians). The material damage was estimated at USD 2 billion. As before, it did not bring a solution closer to hand but only added to the deterioration of the humanitarian situation in the Gaza Strip. 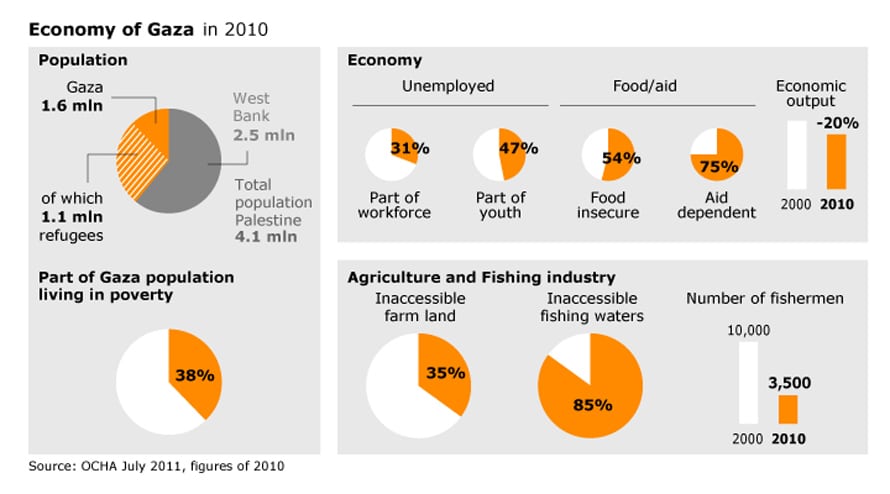 Economic impact
The Gaza Strip's economy has been unable to stand on its own two feet since the June War of 1967. Over the years it beca...