Fanack Home / Palestine / Past to Present / Blockade / Egypt, Gaza and the tunnels

Egypt, Gaza and the tunnels

After the Arab-Israeli War of 1948-1949, the Gaza Strip remained under Egypt’s military administration until its occupation by Israel in the 1967 June War. In this period the Sinai Bedouins and the Palestinians in Gaza continued to mingle through intermarriage and social contacts. This ended when the southern border city of Rafah was split following the 1979 Egypt-Israel Peace Treaty, leaving it divided between Gaza and Egypt. As soon as the agreement was implemented, underground tunnels were dug in home basements across the 14-kilometre long Gaza-Egypt border. Israel’s first recorded discovery of a tunnel was in 1983.

After signing the Oslo Accords, Israel built a high barrier around Gaza. Access to the Gaza Strip was monitored through Israel’s terminals, but when the Second Intifada broke out in 2000, Israel often closed down the terminals and destroyed Gaza’s sea- and airports. Existing tunnels were subsequently upgraded and new ones dug to supplement the shortages which were a direct result of Israel’s strict control on all traffic of goods and materials. The Israeli military, in the knowledge that the tunnels were also used for arms trafficking, began to demolish homes that harboured tunnels and later expanded the demolitions, creating a buffer zone between the border and Rafah City. According to Human Rights Watch, some 1,700 homes were destroyed between 2000 and 2004 in order to create a 100-metre wide buffer zone along the Gaza-Egypt border (the so-called Philadelphia Corridor, known in Israel as the Philadelphi Road). In addition, while implementing its unilateral withdrawal plan from the Gaza Strip in 2005, Israel built an 8-metre high wall. The Mubarak regime in Egypt supported the construction of the wall and the demolition of the tunnels as it would safeguard against any kind of activity that might threaten Egypt’s lucrative tourist industry along the Red Sea. In addition, Egypt feared that Israel’s withdrawal would saddle Egypt with the responsibility for Gaza’s 1.7 million inhabitants, disconnecting it from the West Bank, and thereby obstructing the foundation of an integral Palestinian state.

In January 2006, after Hamas won the Palestinian general elections, Israel responded by systematically tightening its borders and imposing a full-scale blockade of the Strip. Israel closed the Erez terminal to Gazan labourers working in Israel (who at that time constituted 70 percent of Gaza’s workforce). It also shut down the Karni terminal, Gaza’s primary crossing for goods, and it prevented the use of the Rafah terminal for passenger traffic. The array of restrictions on trade and human traffic in and out of the Gaza Strip, coupled with regular Israeli attacks, prompted Palestinians to dig deeper and longer tunnels. A wide variety of goods was transported through the tunnels – from building materials and food to medicine and clothing, from fuel and computers to livestock and cars. Soon on a yearly basis goods valuing between USD 500-700 million were transported through the tunnels (Crisisgroup report).

For those involved, the tunnel business brings great risks. Many work 12-hour shifts, six or seven days a week, in cramped spaces. Since 2006 gas explosions, electrocutions, caving tunnels and Israeli air strikes caused the deaths of 232 Palestinians, leaving another 597 injured according to the al-Mezan Centre for Human Rights.

After the downfall of the Mubarak regime and its replacement by a Muslim Brotherhood government, led by Mohammed Morsi, Hamas expected a fundamental change of policy towards the Gaza Strip. Indeed, many high-level Egyptian delegations visited Gaza, including an official visit by the Muslim Brotherhood, followed by Members of Parliament and of the Salafist al-Nour party. In late 2011 Gaza Prime Minister Ismail Haniyeh was allowed to leave Gaza for the first time since 2007, embarking on regional tours. Hamas was permitted to open an office in Cairo and to deal and meet with officials of the Foreign Ministry and President Morsi himself. In February 2012, Haniyeh held the Friday sermon at the al-Azhar Mosque.

After an attack on Israeli civilians in August 2011 by Egyptian militants and the killing later that day of six Egyptian soldiers by Israeli forces, thousands in Cairo demonstrated in front of and then stormed the Israeli embassy, demanding that Egypt break all ties with Israel. In March 2012, after Israeli violence against Gaza escalated, the Egyptian Parliament passed a motion to halt gas sales to Israel, expel the Israeli ambassador and endorse a parliamentary committee report proposing to reverse Egypt’s course of action toward Israel.

However, relations between Egypt and Gaza remained strained over the Gaza blockade – much to the disappointment of Hamas and the Gazan Palestinians. After the downfall of the Mubarak regime, Salafists in the Sinai Peninsula took advantage of the security vacuum and stepped up their armed resistance to the central government. They killed some tribal leaders who were advocating a deal with the government. The former regime had largely neglected the Sinai for decades. It is a region suffering from poverty, a lack of resources and unemployment.

Salafists started to attack garrisons in the Northern Sinai on a regular basis. On 5 August 2012, sixteen Egyptian soldiers were killed on the border with Gaza. The government responded with heavy attacks and on 24 September 2012, fourteen Salafists were sentenced to death for the murder of Egyptian policemen. In May 2013, seven Egyptian security men were abducted by Salafists demanding the release of those sentenced to death. The policemen were freed after mediation by tribal leaders and the army. In an effort to restore order, the Egyptian authorities asked Israel to allow the Egyptian army to deploy more forces in the Sinai.

The Egyptian media subsequently started a campaign blaming Hamas for not controlling its side of the border. Since the Egyptian military ousted the Morsi government on 3 July 2013, this media campaign has reached unprecedented levels, with Egyptian satellite TV channels and social media rumouring that the Palestinians, for example, want to occupy the Sinai and are interfering in Egypt’s internal affairs, causing turmoil, and are even responsible for attacks on Egyptian security forces by militant groups in the Sinai. The allegations have been leveled at Palestinians in general, and Hamas in particular. The rumours were undoubtedly fed by press reports on 17 June 2013 – weeks before the ouster of President Morsi – stating that Hamas had sent 3,000 troops into Egypt to support Morsi.

Such claims have been used to justify Egypt’s efforts to destroy the tunnels between Gaza and Egypt, a lifeline for Palestinians in Gaza under Israeli blockade. The UN Special Coordinator for the Middle East Peace Process, Robert Serry, told the UN Security Council on 24 July 2013 that 80 percent of tunnels into the Gaza Strip from Egypt are ‘no longer functioning’ due to a crackdown by the Egyptian military. He added that the Gaza Strip was experiencing ‘some serious shortages of fuel and basic building materials for which the tunnels had become the primary entry point due to severe restrictions on imports via the official crossings and the higher cost of fuel available from the West Bank and Israel’. Food prices have shot up and the lack of petrol created long queues.

Another measure taken by the military immediately after the overthrow of the Morsi government was to ban Palestinians from entering Egypt through Cairo Airport, preventing thousands of Palestinians from returning home to Gaza through the Rafah crossing – the sole point of entry and exit for the vast majority of Gaza’s residents. 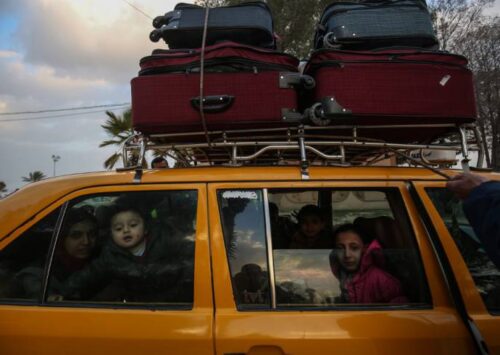 Rafah Crossing a ‘Journey to Hell’ Say Gazans Travelling to Egypt
In order for Gazans to get their name on the security coordination lists, they have to pay between $1,800 and $3,000. It...