In their struggle against the Ottoman Turkish rulers, the British and the French sought support from the Arabs, in the person of the Sharif of Mecca (Protector of the holy cities of Mecca and Medina), Sayyid Husayn ibn Ali. On account of his position and as a descendant of the Prophet Muhammad, he enjoyed great authority among Muslims. Husayn was willing to offer the required support. This was a major step, as it meant he was opposing the authority of the sultan – who was, after all, the Prophet Muhammad’s successor (in the previous years he had already begun to distance himself from the sultan). In exchange for their support, the Arabs were promised independence by the British (set down in writing in the so-called Husayn-McMahon Correspondence, 1915-1916).

After the war, however, Great Britain and France did not fulfil their obligations towards the Arabs. Instead, London and Paris divided the conquered Ottoman Turkish territory between them in a British and a French mandate territory (a 20th century word for a colony), on the basis of a secret agreement (the Sykes-Picot Agreement, 1916).

This happened with the consent of the recently established League of Nations, the predecessor of the United Nations. In 1920, the British Mandate of Palestine thus came into existence, encompassing the territory of the future State of Israel and Palestine.

On 2 November 1917, British Foreign Secretary Arthur Balfour wrote a letter to Walter Rothschild, a leading figure in the British Jewish community, expressing the government’s support for a Jewish homeland in Palestine. Comprising a single paragraph, the text became known as the Balfour Declaration. Palestine was, at the time, a remote province in the disintegrating Ottoman Empire, with which Britain had been at war since 1914. Yet despite having no claim to the territory, the British made the declaration without consulting its 650,00 inhabitants, made up of about 92 per cent Arabs (Muslim and Christian) and 8 per cent Jews. 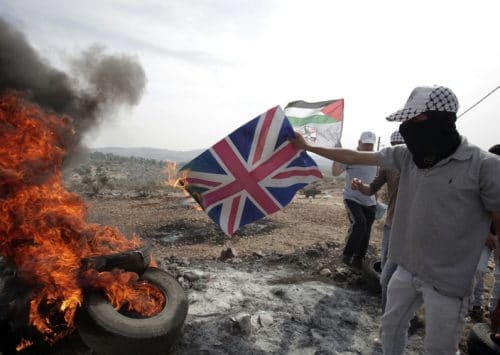