Fanack Home / Palestine / Past to Present / In Gaza, the ‘Great March of Return’ Jeopardizes Opening of Rafah Crossing, Truce with Israel

In Gaza, the ‘Great March of Return’ Jeopardizes Opening of Rafah Crossing, Truce with Israel

The Palestinian-Israeli conflict entered a new phase on 30 March 2018, with the launch of the ‘Great March of Return’. The first of the weekly demonstrations on the border between the Gaza Strip and Israel saw 16 Palestinians killed and more than 1,400 others wounded. Politicians did not expect the demonstrations to continue and have political repercussions.

The Gaza Strip has for the past 11 years experienced an unprecedented humanitarian crisis due to the blockade imposed by Israel and Hamas’ restrictive one-party rule. Consequently, popular anger had been mounting for some time. The questions posed for several months were: Where will the explosion take place? Will it be against Hamas, which should bear the primary responsibility as the de facto ruler of the Gaza Strip? Or will it be directed at the Palestinian Authority (PA), which has slashed government salaries in the Gaza Strip and cut off the power? Will demonstrators target the Rafah border crossing with Egypt, Gaza’s only link to the outside world that is opened for a few days each year? Or will the explosion target Israel, which has been tightening its grip on Gaza since Hamas took over the government in 2006?

Hamas was smart enough to take advantage of the Great March of Return to channel popular anger towards Israel. Gazans cannot express their anger towards the PA because of the latter’s absence in the Gaza Strip. At the same time, Hamas does not want to negatively affect its relationship with Egypt, which has improved significantly since last year.

On 13 May, Egypt called for a one-day meeting with the Hamas leadership. Ismail Haniyeh, head of the Hamas Political Bureau, discussed with Egyptian officials the repercussions of the Great March of Return. The next day marked the 70th anniversary of the al-Nakba (the Palestinian exodus that led to the first Arab-Israeli war in 1948) and coincided with the opening of the US embassy in Jerusalem. On the same day, the Egyptian government decided to open the Rafah crossing until further notice. Since then, the crossing has been operating daily except for a three-day closure around the anniversary of the Egyptian revolution on 30 June. Egypt decided not to be part of the siege imposed on Gaza, especially because the humanitarian crisis in the strip was deteriorating.

Continued deaths and injuries sustained in the Friday demonstrations – notably on 14 May when Israel killed more than 60 unarmed Palestinians and injured nearly 3,000 others – have increased international pressure on Israel. Although the details of the US’ imminent ‘deal of century’ are vague, indications are that an independent viable Palestinian state is not the main goal. Indeed, the deal suggests a weak and fragmented administrative entity that has no sovereignty and falls under Israel’s political, security and economic dominance. The US vision matches the Israeli one; namely, that Palestinians must give up East Jerusalem, cede the right of refugees to return and abandon the right to self-determination, an independent state and the territories that have been lost to Israeli settlements in exchange for promises of investment from Arab countries and normalization between these countries and Israel.

Qatar, which is mediating between Hamas and Israel through Qatari ambassador Mohammed al-Emadi, is coordinating Qatar’s positions and roles with the US administration, particularly the options to defuse the tensions between Gaza and Israel and avoid a new war. Qatar may be brokering an agreement to swap prisoners too. Several statements made by the US Special Representative for International Negotiations Jason Greenblatt said that Gaza should be supported by humanitarian projects that do not benefit Hamas, and that the humanitarian assistance should be separate from the political support. Several Western countries and Israel agreed to implement vital humanitarian projects in Gaza through the United Nations (UN) and away from Hamas. The UN was therefore expected to approve a series of projects worth $600 million in Gaza, aimed at creating jobs and improving electricity and water networks.

By the end of July, nothing had happened. On the contrary, Israel closed the border to Gaza for several days as a punishment, worsening the situation. For its part, Hamas, which agreed to separate humanitarian and political support from an Arab country believed to be Qatar, pledged to maintain the truce and prevent attacks from Gaza on Israeli targets in the future.

In light of these developments and the international attempts to ease the tension on the border with Israel, Palestinian President Mahmoud Abbas and former Prime Minister Salam Fayyad held a meeting to form a new Palestinian government and end the political divide between Gaza and the West Bank. Abbas sought to use the initiative and Palestinian unity against the US-led deal of the century. Should the Palestinian government be formed by Fayyad, who has significant credibility with the US and Europe, Fayyad is expected to resurrect the proposal he first presented two years ago to end the Palestinian divide, potentially resolving several issues concurrently. In addition to solving the humanitarian crisis in Gaza, tension on the Israeli border would be alleviated and a long-term calm could be achieved. Moreover, there would be a real key to political partnership among all Palestinian factions. Consequently, the Egyptian leadership would likely agree to keep the Rafah crossing open because it would be run by an internationally recognized administration. 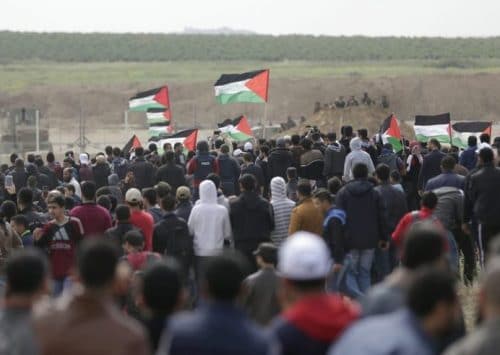 Gaza’s Great March of Return: A Strong Call to the World
It seems clear that the momentum that has been building will be difficult to stop. However, it remains to be seen what t...