A Palestinian intellectual once said that Mahmoud Abbas might be qualified to rule a country like Switzerland but definitely not Palestine—because Palestine is under occupation and Abbas does not have the revolutionary character that leaders seeking national liberation have had historically, especially during the foreign colonial period in Africa, Asia, and Latin America. Abbas does not have the classical revolutionary spirit, but rather, a clearly political approach that is based on diplomacy and political negotiations to achieve a national vision of liberation and establishment of a Palestinian state. Abbas’s approach, which he initiated when he came to power in 2005, has not, however, produced any practical results, and his failures have outnumbered his achievements, which many politicians and intellectuals have considered insignificant and intangible.

In mid-2005, a few months after Abbas assumed the presidency, the Fatah movement, which he led, lost control of many local government councils, and, in early 2006, lost the legislative elections to the Hamas movement by a large margin. Internal Palestinian divisions deepened after Hamas took control of the Gaza Strip by force. Three Israeli offensives struck at the Gaza Strip between 2008 and 2014, but Abbas took no firm position against the Israeli occupation; he did not even visit Gaza to show solidarity with its inhabitants. He even refused initially to discuss the Goldstone Report, which had accused the “Zionist entity” (i.e., Israel) of committing crimes against humanity during the 2008 war on Gaza. Israeli incursions into the West Bank and East Jerusalem increased significantly during Abbas’s presidency, to the extent that the two territories were no longer contiguous. The Palestinian negotiating team made no progress in talks with Israel, and none of the rounds of talks was successful.

Abbas’s main political achievement was the declaration of the Palestinian state as a non-member observer state in the United Nations in a vote by the UN General Assembly on 29 November 2012. This made it possible for Abbas to sign several international treaties, including the Rome Statute, which granted the Palestinian state membership in the International Criminal Court and other UN agencies in early 2015. These have been Abbas’s main political accomplishments since taking power.

Hamas—the main rival of Fatah and, by extension, the Palestinian president—has been critical of Abbas since he came to power, and both criticism and Palestinian divisions widened in mid-2007 because of the Palestinian Authority’s (PA) security coordination with Israel against resistance (insurgent) groups. Criticism of Abbas began to arise from the largely conservative Palestinian society because of the continued Israeli occupation. Following Hamas, leftist Palestinian factions, such as the Popular Front for the Liberation of Palestine, began to criticize Abbas for his political positions. Key Fatah figures, such as Mohammad Dahlan, had deep differences with Abbas, who discharged him and expelled him from Fatah. The two engaged in altercations and exchanged libels. Divisions within Fatah deepened further as top Fatah officials, such as Azzam al-Ahmad, a member of Fatah’s Central Committee, criticized Abbas during a television interview in late 2014, as did other officials, such as Jibril al-Rujub and Tawfiq al-Tirawi, after the president tried to brush them aside in favour of his favourites, including Saeb Erekat.

Several Israeli officials, including former Israeli foreign minister Avigdor Lieberman, levelled strong criticisms against Abbas and accused him of inciting foreign countries against Israel against the backdrop of his address to the UN General Assembly in September 2014.Throughout his tenure, Israeli prime minister Benyamin Netanyahu has been acutely critical of Abbas and even threatened Abbas when he sought reconciliation with Hamas. Observers of Israeli affairs interpreted the Israeli stance as an attempt to end Abbas’s political life. The United States and European countries has seemed indifferent to the campaign against Abbas, which suggests that Abbas is being abandoned by the international community.

Any leader, especially a president, needs international support, which Abbas lacks. Civil-society organizations and their top officials have disapproved of Abbas for years. Periodic reports by human-rights groups such as the Palestinian Center for Human Rights condemned the security services in the Gaza Strip and the West Bank, which is under Abbas’s authority.

Public opinion on social media has been important. Many public figures with long-held negative views on the policies of Abbas and other PA officials disclosed information on cases of administrative corruption involving the director general of border crossings and the president’s adviser for foreign affairs. Palestinian journalists and social media activists, especially those not living in the West—whether in the Gaza Strip or outside PA territories—incited Palestinians against Abbas’s failed policies. Many comments on Twitter and Facebook following the resignation of Ghassan al-Shakah, head of the Nablus municipality, demanded that the president leave his post after he failed to achieve anything on the ground, just as al-Shakah had failed to provide the necessary water supply for the residents of Nablus. One of the recurring questions raised on Facebook and Twitter was: “When will the president [Abbas] pack up and leave too?” Criticism of the president sharpened significantly when he failed to pay compensation to the bereaved al-Dawabishah family, whose son was burned to death by Israeli settlers in late July 2015.

High unemployment, especially amongst young people, has aggravated young people’s growing resentment at President Abbas, because their dreams have been dashed by political and economic stalemate. One student from al-Azhar University–Gaza complained vociferously- about his doomed future after his graduation, holding the Palestinian leadership entirely responsible for its failure to deal with the catastrophic situation in the Gaza Strip. Unemployment rates are the highest in Gaza, as high as 68 percent, according to the latest World Bank report.

Social-media platforms have had an impact on Palestinian society. For example, a Facebook page titled “Abbas Does Not Represent Me,” which has tens of thousands of followers, triggered many comments that contributed significantly to the growing bitterness against President Abbas and may lead to his political downfall as he loses the popular support necessary for the survival of any leader confronted by foreign pressure. There are many signs that Abbas will not survive the growing pressure for long, given his advanced age—he is over 80—so he does not have enough time to tip the balance. An opinion poll conducted by the Palestinian Center for Policy and Survey Research in early March 2015 showed that only 40 percent of respondents are satisfied with Abbas’s policy, which contrasts significantly with the 50 percent of the respondents’ satisfaction with Abbas over the al-Shati reconciliation agreement with Hamas.

Abbas’s latest step demonstrates his authoritarian, non-democratic approach, which did not take into account that the PLO is the umbrella group for all Palestinian political factions. Abbas insisted on holding the National Council’s session in Ramallah, which makes it impossible for the Palestinian leaders in Gaza and abroad to participate in the meeting, thus limiting the leading positions to Abbas loyalists.

In short, President Mahmoud Abbas has failed to build Palestinian state institutions, which was his goal from the very beginning. 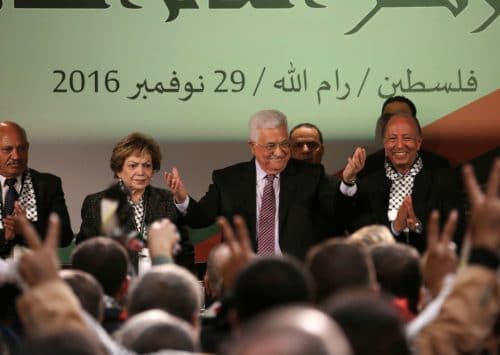 Abbas Emerges from Fatah Congress Stronger than Ever
In contrast with previous Fatah congresses, which were characterized by intense disagreements among members over the pol...