Fanack Home / Palestine / Past to Present / Gaza’s Great March of Return: A Strong Call to the World

Gaza’s Great March of Return: A Strong Call to the World

Ahead of the 15 May anniversary of the Nakba – which marks 70 years of occupation for Palestinians – a new wave of resistance has begun in Gaza.

The ‘Great March of Return’ was held on 30 March 2018 to commemorate the 1976 Land Day protests over Israeli expropriation of land for settlements, in which six Palestinian protesters were killed by Israeli Army.

The recent demonstration, which brought tens of thousands of Gazans to the border with Israel, was envisioned as a massive display of non-violent resistance that would unite different factions and social groups in the besieged enclave of 2 million people. But it quickly turned violent. Israeli snipers opened fire on unarmed protesters when a group of young men approached the border fence, throwing stones and attempting to plant the Palestinian flag. Eighteen Palestinians were killed and more than 1,000 injured, in the worst day of violence in Gaza since the 2014 Israeli offensive.

Protesters and Hamas officials insisted that the victims were unarmed and were killed in cold blood. The Israeli Army characterized the protests as ‘violent riots’, claiming that ‘ten known terrorists with track records of terrorist activity were killed whilst carrying out acts of terror’.

United Nations (UN) and European Union officials called for an investigation into the deaths, but Israeli officials have rejected the call. Avigdor Lieberman, Israel’s defence minister, said on public radio, “From the standpoint of the [Israeli Army] soldiers, they did what had to be done.”

Organizers said the protests by the border fence will continue until 15 May 2018, when protesters may attempt to cross the border – an act that will certainly also result in a violent response by security forces.

There is a precedent for the border protests. In May 2011, Palestinians in the West Bank, Gaza, Lebanon and Syria marched on the fence, and a small number breached it in the disputed Golan Heights. In those protests, too, more than a dozen people were killed.

Tensions have grown in the Israeli-Palestinian conflict since December 2017, when American President Donald Trump announced that his country would recognize Jerusalem as the capital of Israel and move its embassy there. In Gaza, which has been under blockade by Israel and Egypt for more than a decade, the situation is particularly dire, exacerbated by feuding between Fatah – which controls the Palestinian Authority (PA) – and Hamas, which has resulted in punitive measures taken by the PA against Hamas.

In spite of a reconciliation deal reached between Fatah and Hamas in October 2017, the UN reported ‘only marginal improvement in the humanitarian situation’, with ongoing shortages of electricity, drinking water and medical care.

Discussions about organizing a mass protest at the border began a few months ago, bringing together a new generation of young activists with representatives of the political factions, civil society and non-governmental organizations. These groups joined together to create an organizing committee, which was composed of an ‘array of national and Islamist factions and organizations from the occupied territories and the diaspora’, according to an International Crisis Group report.

Organizers say that, to Palestinians, ‘it is now indisputable that they cannot achieve their national aims through mediation by the US or the international community’, the report added. ‘The march is an attempt by Palestinians to take matters into their own hands and shape their fate, as they attempted to do during the first and second intifadas.’

Basem Naim, a former health minister with the Hamas government and former adviser to the prime minister in Gaza on international relations, said that non-violent protests are not “an alternative to all other tracks” but are one tactic to bring attention to the plight of the people in Gaza in hopes of spurring international action.

“This is one of the tools that can put Israel under pressure, that they can show peacefully the region or the international community the injustice that they are living in Gaza and in Palestine in general,” he told Fanack Chronicle.

Naim said that Friday’s protest was a peaceful gathering that included “men, women, elderly, children, reps of all factions, of all social groups”. In spite of the confrontational tactics of some of the protesters, including burning tyres and throwing rocks, he insisted that they never posed a threat to the Israeli troops.

Still, he said, the show of force by Israeli soldiers was expected “because this is what they have done for decades”. In spite of the deaths, Naim said the Gazans will continue to protest because “we have nothing to lose. Either we get our situation changed or we are not dying in silence.”

But Usama Antar, a politics lecturer at the University of Gaza who also took part in discussions around organizing the protest, faulted the organizers – and particularly Hamas and the other political factions – for failing to control the crowd and ensure that the event did not result in any fatalities. “It was planned that the cost of this demonstration should be zero – no killed people, no injuries,” he said.

To ensure that the event remained peaceful, Antar said, all protesters were meant to remain 700 metres from the fence, with the distance gradually decreasing at subsequent demonstrations until finally a decision would be made regarding an attempted crossing. But the organizers underestimated the degree of frustration of the young people in the crowd, he said.

It seems clear that the momentum that has been building will be difficult to stop. However, it remains to be seen what the final impact of the protests will be, and whether organizers will succeed in harnessing the anger into non-violent resistance or whether it will escalate once again into armed conflict. 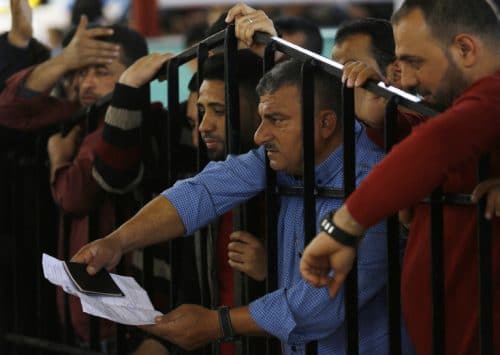 In Gaza, the ‘Great March of Return’ Jeopardizes Opening of Rafah Crossing, Truce with Israel
In addition to solving the humanitarian crisis in Gaza, tension on the Israeli border would be alleviated and a long-ter...