The Chronology of Palestine’s Journey to the International Criminal Court

The Palestinian minister of justice, in compliance with Article 12, paragraph 3 of the Rome Statute, on 22 January 2009 lodged a declaration with the International Criminal Court’s (ICC) registrar accepting the Court’s jurisdiction regarding crimes committed in the Palestinian territories. The jurisdiction was accepted, retroactive to 1 July 2002, the date on which the Statute took effect. Consequently, the office of the prosecutor began its “preliminary analyses” regarding the case submitted, according to Article 15 of the Rome Statute, which requires the office of the prosecutor to initiate serious analyses of reports received from any source regarding crimes that are subject to the jurisdiction of the Court, including information received from individuals or states that are not party to the Rome Statute.

Former Court prosecutor Luis Gabriel Moreno Ocampo announced that he received, on 13 February and 16 October 2009, Palestinian delegations headed by the Palestinian justice minister Ali Khashan, who was accompanied by Palestinian and Arab diplomats and a group of international legal experts. The delegations presented documents regarding crimes alleged to have been committed in Palestine, along with legal analyses regarding the validity of the declaration of 22 January 2009.

On 3 May 2010 the office of the prosecutor of the Court issued a report pertaining to the legal issues that were part of his preliminary analyses, as well as a list of the letters and memoranda received up to 3 May 2009 from various governmental and non-governmental agencies, including the Palestinian Authority, well-established international legal scholars and jurists, and Palestinian, Israeli, and European centres. The memoranda pertained to the validity of, and legal issues related to, the declaration of 22 January 2009.

Three years after the preliminary analyses had begun, the office of the prosecutor announced, on 3 April 2012, the findings regarding the Palestine file, specifically that Palestine’s status as an “observer entity” at the UN was precluded Court jurisdiction over alleged crimes committed in Palestine. The declaration lodged by Palestine regarding the Court’s jurisdiction on 22 January 2009 was insufficient to create Court jurisdiction in Palestine, regardless of its temporal or subject-matter jurisdiction over the alleged crimes. The prosecutor explained his opinion by stating that Article 12, paragraph 3 of the Statute permits only states to lodge a declaration of accession to the Court’s jurisdiction.

Further, it was not within the prosecutor’s capacity to decide the international legal status of Palestine, specifically, whether or not it was a state under article 12, paragraph 3. Several renowned legal scholars, including John Dugard and William Schabas, considered the prosecutor’s opinion, which relied on the vague language of the Statute, a way of avoiding responsibility. This was true especially because the majority of member states signatory to the Rome Statute recognize Palestine as a “state” and which are considered as the legislative and supervisory reference for the Court.

On 29 November 2012 the United Nations General Assembly adopted resolution 67/19, which elevated Palestine’s status from “observer entity” to “non-member observer state,” with 138 “yes” votes, 9 “no” votes, 41 abstentions, and 5 absences. The resolution settled the dispute over Palestine’s status as a state under international law, thus extending to the State of Palestine the membership options permitted to states, including the Rome Statute of the ICC.

Palestine’s foreign minister, Riyad al-Maliki, visited the ICC in The Hague on 5 August 2014 and met with the Court’s prosecutor, Fatou Bensouda. During his visit, al-Maliki inquired about the mechanisms and procedures required for Palestine to ratify the Rome Statute and to join the ICC. After the visit, the office of the prosecutor declared that Palestine had not lodged an application to become a member of the Court and had not acceded to the Court’s jurisdiction after attaining the status of a “non-member observer state” at the UN.

Fatou Bensouda, the chief prosecutor, on 2 September 2014 issued a statement in which she asserted that Palestine’s status in the UN General Assembly as a “non-member observer state” would not result in a retroactive accession to the Court’s jurisdiction as a result of Palestine lodging a declaration in 2009, despite the many criticisms that the Court received for its slow reaction to allegations of crimes committed in Palestine, especially in light of the various legal opinions that called on the prosecutor’s office to reconsider its preliminary analyses regarding the application of 22 January 2009, in particular after Palestine gained the status of a “state.”

On 1 January 2015, the registrar of the ICC, Herman von Hebel, announced that he received a declaration signed on 31 December 2014 by President Mahmoud Abbas based on article 12, paragraph 3 of the Rome Statute,in which Palestine acceded to the jurisdiction of the Court as of 13 June 2014. He added later that he had sent President Mahmoud Abbas a letter, dated 7 January 2015, informing him that the Palestinian declaration was accepted and that it was referred to the prosecutor’s office for further examination. 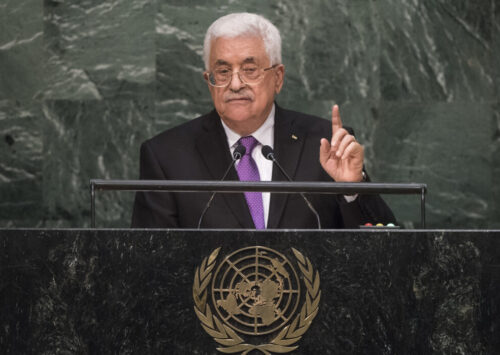