After years of unsuccessful negotiations with Israel, the Palestinian National Authority (PNA) leadership decided, in the autumn of 2010, to launch a diplomatic offensive among United Nations Member States, in the hope of securing support for full UN membership of the State of Palestine, which had been proclaimed by the Palestine Liberation Organization (PLO) in 1988 in Algiers (over the years this state has been recognized by around one hundred UN Member States, predominantly belonging to the so-called Third World). The PNA felt encouraged by US President Barack Obama’s address to the UN’s Special Session in September 2010, in which he had stated: ‘When we come back here next year, we can have an agreement that can lead to a new member of the United Nations, an independent, sovereign state of Palestine living in peace with Israel.’

The Palestinian leadership had its own motives for this diplomatic endeavor. After Barack Obama took office the PNA committed itself to a new round of negotiations, in spite of protests on the Palestinian streets. The PNA was implementing its program of August 2009 that seeks to end the occupation and create a State within two years. This program had received full support from the Quartet (the UN, the US, the EU and Russia), which had encouraged the PNA to move forward towards ‘an independent State that provides good governance, opportunity, justice and security for the Palestinian people from the first day that it is established and is a responsible neighbor to all States in the Region’. In that same statement, the Quartet called on Israel to ‘freeze all settlement activity, including natural growth, to dismantle outposts erected since March 2001, and to refrain from demolitions and evictions in East Jerusalem’. However, the talks produced no tangible results, notwithstanding the PNA’s willingness to make unprecedented concessions towards Israel, as was later revealed in The Palestine Papers.

After a fiery speech at the UN’s Special Session in New York on 23 September 2011, Mahmoud Abbas handed over the Palestinian application to UN Secretary-General Ban Ki-moon. The Palestinians are applying for a Palestinian State within the 1967 borders. This will have political consequences even if they do not have full sovereignty on the ground. Being a full Member State will allow the Palestinians to join UN agencies and become a party to international treaties and courts such as the International Criminal Court, where the occupation of territory by Israel could be challenged. Mr. Ban passed on the application to the Security Council.

The diplomatic initiative was met with mixed reactions. There were those who regarded it as a first step away from the foundering, slippery Oslo process. Critics questioned the right of the PNA leadership to launch such an initiative, in the knowledge that its mandate had expired several years before. Indeed, the PNA did not make an effort to obtain such a mandate from the Palestinians whose interests were at stake: not only those in the West Bank and the Gaza Strip, but also the Palestinians living in Israel and in the diaspora.

In addition critics feared that the move might actually harm Palestinian rights. If the UN Security Council or the UN General Assembly voted to admit the ‘State of Palestine’ either as a full member or as a non-member observer state, the the PLO, which ostensibly represents all Palestinians – inside and outside Palestine – would most likely have to give up its seat to unelected representatives of the PNA, the representative of the ‘citizens’ of the ‘State of Palestine’, i.e. the Palestinian inhabitants of the West Bank and the Gaza Strip. This would mean a severe blow to attempts to eventually realize full Palestinian rights through international bodies. This ‘state’ would have no control of its territory, which would still be occupied by Israel. Its ‘government’ – the successor of the PNA – would remain dependent on external financiers. 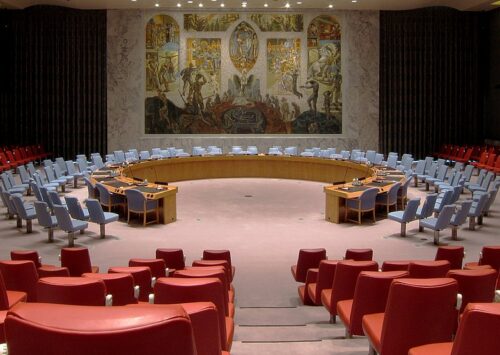 The procedure
In order for the Palestinians to be admitted as a Member State, they would need nine out of fifteen Member States' votes...