Under the 1994 Paris Protocol on Economic Relations – incorporated into the Oslo Accord governing the economic relations between Israel and the Palestine Liberation Organization (PLO) – Israel collects customs and tax revenues on behalf of the Palestinians that are worth about $220 million per month and receives a commission of 2 per cent of the total amount.

Although the protocol officially expired almost two decades ago, Israel insists that Palestinian exports and imports continue to go through Israel, effectively denying the ruling Palestinian Authority (PA) sovereignty over its borders and allowing Israel to control the majority of Palestinian financial resources.

On 3 July 2018, the Israeli Knesset (parliament) endorsed a law to punish the PA financially for the welfare payments it makes through the Palestinian Authority Martyr’s Fund to political prisoners and those who lost family members to Israel’s military operations. In accordance with the law, Israel made the decision on 17 February 2019 to withhold $138 million in tax transfers to the PA. The amount was estimated as the total money paid annually to the families of Palestinian prisoners and martyrs. Approximately 5,700 Palestinian men and women are currently held in Israeli prisons.

This financial loss comes on top of the United States’ (US) suspension of annual financial allocations and funding for UNWRA, the United Nations agency for Palestine refugees. In 2018, US President Donald Trump signed the Taylor Force Act, which stipulates that aid to the Palestinians will be cut as long as the PA continues to make its welfare payments.

Over the years, Israel has used the Oslo Accord as a political tool, freezing the monthly customs and tax revenues as a means to put pressure on or influence the Palestinian leadership. Examples include during the second intifada (2000-2005), after Hamas‘ victory in the Gaza Stirp in the 2006 legislative elections and in reaction to the United Nations General Assembly’s vote to make the PA a permanent observer in 2012.

Palestinians have denounced the withholding of these funds, describing it as an act of stealing and piracy by Israel at the expense of Palestinian social and economic development.

The PA relies on a range of annual revenues, amounting to approximately $3.8 billion in 2018. Most important of these are the customs and tax revenues from foreign imports, which amount to about 60-65 per cent of the total annual revenues, in addition to value-added tax on goods, income tax and fees imposed on the public services of various ministries, amounting to about 20-25 per cent annually. Foreign support for the PA’s general budget and developmental projects makes up approximately 15 per cent of annual revenues.

After the Israeli decision to withhold funds, Palestinian President Mahmoud Abbas said he would instruct the Ministry of Finance to pay in full the monthly allowances provided by the Palestinian Authority Martyr’s Fund and then pay the salaries of government employees.

Palestinian Finance Minister Shukri Bishara announced that for March, government salaries would be paid in full if they amounted to 2,000 shekels ($550) or less. This means that only 40 per cent of employees received their full salary. He added that 10,000 shekels ($2,755) would be the upper limit for the disbursement of salaries, including for ministers. In other words, people with low salaries were protected while the austerity measures targeted high-paid employees.

During his speech at the Arab summit in Tunisia on 31 March, Abbas referred to his government’s financial crisis and called for the realization of promises made during previous summits to provide a financial safety net and meet financial obligations to support the state’s budget. Saudi Arabia rushed to transfer $40 million, sending a message to other Arab countries that they should show solidarity with the PA.

In recent years, international financial aid for the PA has declined, amounting to about $520 million or around 15 percent of the total annual revenues. In light of the strained relationship with Israel and the large budget deficit, predictions indicate that the PA will only be able to cover part of its expenses, including the costs of various service ministries such as the ministries of health and education. The PA’s decision to borrow part of the funds from Palestinian banks and pay only a portion of employees’ salaries is a solution that can only be sustained for a few months.

Undoubtedly, the deficit will limit the PA’s negotiating position and will put it on the brink of financial collapse. There is a Palestinian consensus that abandoning those who have sacrificed their lives and freedom for the Palestinian cause is not an option.

This puts Abbas in a difficult position. He has repeatedly threatened to stop security coordination with Israel. Although he has never carried out the threat, there are growing concerns that security will be compromised if dissatisfaction with the PA boils over into anger.

A lack of security coordination may also set the stage for fighting between militant groups in the West Bank and with Israeli settlers. 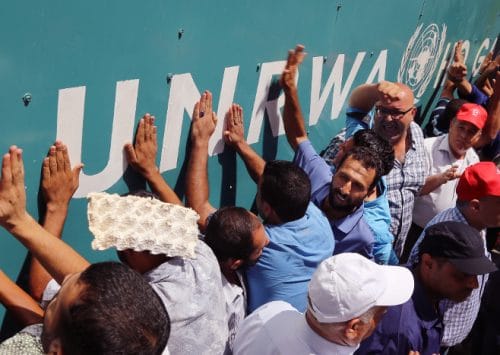