For more than twenty years, the general budget of the Palestinian National Authority (PNA) has been largely dependent on foreign funding by donor countries, so much that the PNA considers foreign funding to be an essential part of its general budget. In the last two years, however, a decline has been observed in the international political support for the Palestinian issue. Besides, the international financial support has also started to drop little by little, to the extent that the Palestinian prime minister Rami Hamdallah announced in November 2016 that the PNA is facing financial deficit because donor countries have not fulfilled their financial pledges.

After the establishment of the PNA under the first Oslo Accord in September 1993, or what is known as the Declaration of Principles between Israel and the Palestinian Liberation Organization (PLO). The first conference for donor countries was held in October 1993 in Washington with the participation of 42 donor countries, including the U.S., Japan and the European Union. The main objective of the conference was to levy international assistance for the Palestinian people in order to press ahead with the peace process on the one hand, and on the other hand to develop and organize a certain mechanism for the donor countries to provide financial and technical support for the PNA. The purpose was to empower the new authority and enable it to run the affairs of the Palestinian territories that the Israeli military forces had agreed to withdraw from. During the first conference, the donor countries provided a total of $2.4 billion in financial and logistic support for the PNA. As a result, in April 1994, the PNA and Israel concluded an economic agreement which was referred to later as “the Protocol on Economic Relations,” also known as “the Paris Protocol,”, under which regulation regarding the economic and financial relationship between the two sides was set for a transitional period of five years, to allow for the creation of a viable Palestinian economic system.

Under the Interim Agreement on the West Bank and the Gaza Strip, known as Oslo II, which was signed by Israel and the PLO on 28 September 1995, it was agreed that the final status negotiations on the West Bank and Gaza Strip will end within the five-year transitional period, by 4 May 1999. However, 22 years later, this transitional period has yet to end. The negotiations have been going through stalemates and successive crises. As a result, the Paris Protocol remains in force and the Palestinian economy remains dependent on Israel’s, and could not develop the way the interim agreement intended. Because of this, donor countries continue to hold conferences year after year with the purpose of supporting the PNA’s general budget.

The PNA’s annual budget relies on three basic sources. First, the customs clearance funds and taxes that Israel collects for the Palestinian Treasury, on the goods and items that are either imported or exported from and to Palestine through the Israeli borders, in accordance with the Paris Protocol. These funds amount to approximately 62 percent of the total revenues of the PNA. The second source is foreign funding by donor countries, which amounts to a range of 25 to 30 percent; the remaining percentage comes from the PNA’s local revenues in fees and income tax collection. It is important to note that the biggest sources of revenues of the PNA are under the control of foreign parties, and therefore are always subject to political changes. Since President Mahmoud Abbas announced in 2011 that he was planning to submit a request to the United Nations to recognize Palestine as a member state, which he indeed followed on , international grants and financial aid have begun to gradually decline. The total amount of grants and financial aid received by the PNA in 2011 amounted to approximately $1.4 billion, according to budget reports issued by the Palestinian Finance Ministry. These grants and financial aid have dropped by 43 percent in 2015.

Meanwhile, the money transfer gap amounted to $385 million. The PNA was expecting to receive a total of $1.762 billion in aid for the general budget for the year 2015. However, the financial aid collected in 2015 amounted only to $700 million , because of the decline in external grants, specifically from European countries and the United States.

Economist Aymann Abu Aisha explained in a study published in January 2015 that since the signing of the Oslo Accord, the donor community has been providing financial aid to the PNA for more than 20 years. The total of this aid is estimated at $27 billion, which makes the PNA the main recipient of financial aid from the international community. In 2014, the PNA received about $1.4 billion. Of this amount, about $1 billion was provided annually by the European Union, which is the main financier of the PNA, followed by the United States, which provides $400 million per year to the PNA.

Meanwhile, the Arab financial aid has risen in 2015 in terms of value, but the number of Arab donor countries has decreased. Since early 2013, Saudi Arabia has increased its share of financial aid and by the end of 2015, it had become the main Arab donor country for the Palestinian budget with an average annual financial aid of $240 million. Other Arab countries such as Egypt, Algeria, and Oman are committing themselves to fixed amounts of annual financial aid. However, it is worth noting that since the beginning of 2016, Saudi Arabia has not transferred any financial aid for the general budget of the PNA. According to analysts, this is mainly due to the austerity measures taken by Saudi Arabia after it started the war in Yemen, in addition to the tense relationship between the Saudi and Palestinian leaderships. Moreover, the United Arab Emirates have stopped supporting the PNA’s budget three years ago, after the Palestinian president took exclusionary measures against his political opponents, which created tensions between the Emirati and Palestinian governments. The United Arab Emirates and Saudi Arabia share a genuine will to see the Palestinian house united under the nationalist party Fatah, to achieve reconciliation between the fundamentalist Hamas and Fatah movements and restore power to the Palestinian Liberation Organisation. In doing so, they would hope to advance the peace negotiations with Israel on the basis of the Arab initiative.

In response to President Mahmoud Abbas signing the Rome Statute on 31 December 2014, Israel decided to freeze the monthly customs clearance funds. This was seen as a punishment measure towards the PNA for becoming member of the International Criminal Court, as requested in the Rome Statute. The frozen funds amounted to approximately 62 percent of the PNA’s monthly revenues, or about $175 million. Within the same context, the U.S. State Department announced that the Palestinian request to become a member state of the International Criminal Court would have financial repercussions. As a result, the US Congress decided to freeze the U.S. annual financial aid for the PNA, which amounted to approximately $440 million. Ihab Bsisu, the official spokesman for the Palestinian Government, said that in 2015, the US financial aid for the Palestinian budget amounted to zero, and that the PNA received only 28 percent of the total financial pledges from the international community.

Months later, Israel stopped freezing the Palestinian funds, out of fear that the PNA would collapse after failing to pay the salaries of the 170,000 government employees, including those of the security services personnel, whose absence could have had negative consequences on security coordination and cooperation between the two sides.

Reasons for the Decline of International Support for the PNA

A number of reasons have led to the decline in international support for the PNA, the most important of which are the following:

As a result, the Palestinian public debt is constantly rising. The Palestinian public debt amounted to $2.4 billion at the end of 2014 and it is still on the rise. This rolling public debt may cause the complete collapse of the PNA because of its inability to fulfill its financial obligations to Palestinian citizens. Such a crisis would threaten the stability of relations with Israel and the implementation of the agreements signed by the two sides.

The PNA is trying to put an end to the ongoing financial shocks affecting the general budget in the short and medium terms. Therefore, the authority seeks to achieve the following goals: 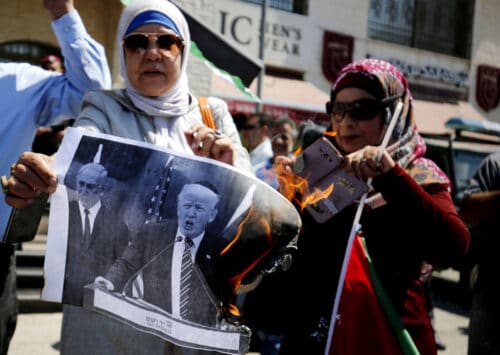