After the 2006 Palestinian legislative elections and the split between Fatah and Hamas, which saw the West Bank governed by Fatah and the Gaza Strip controlled by Hamas – which many countries regard as a terrorist organization – Israel and Egypt instigated a crippling siege of Gaza, effectively turning the enclave into the largest open prison in the world.

Gaza is inhabited by about 1.8 million people, whose only way in or out is via seven land crossings. Six of them are controlled by Israel, which rarely allows people or goods across the border. The seventh is the Rafah crossing, which connects Gaza to Egypt via North Sinai.

Egypt allows certain Gazans through the crossing based on coordination lists sent from Gaza to the Egyptian intelligence service, which investigates the individuals named on the lists and grants security clearance. Most of those listed are patients whom the Palestinian Ministry of Health has approved to complete their medical treatment abroad. A smaller number are students pursuing their education at Egyptian universities or citizens travelling to other countries from Cairo Airport.

In early July 2019, Gazan citizen Khalil returned home via the Rafah crossing after attending a conference in Europe. His flight to Cairo took a few hours while his journey from Cairo to Gaza took five days. He described the crossing as a journey to hell, which begins with submitting an application to a tourism company that acts as an intermediary between citizens and officials in Gaza and Cairo. In order for these citizens to get their name on the security coordination lists, they have to pay between $1,800 and $3,000. It is unclear where this money goes, but most people believe it goes to the Egyptian intelligence officers who arrange the security clearance.

Although the main purpose of the security coordination lists is to facilitate the passage of Gazans across the border, this does not seem to lessen the suffering, according to Khalil. “The procedures for inspection and review of documents at the crossing are supposed to take a few minutes, but they actually take from 15 hours to two days. You are asked to be at the crossing on the morning of the agreed-upon day and keep waiting for the completion of procedures until the promised moment comes and the approval is given for the inspection procedures to begin. During that process, travellers are subjected to poor treatment by Egyptian officers and soldiers, who, despite their improved treatment recently, continue to abuse travellers and show hatred towards Palestinians. On the other hand, other travellers receive very friendly treatment, and you can facilitate the process through the same intermediary who puts one’s name on the coordination list by increasing the amount to be paid. However, you would never risk trying to bribe or argue with anyone at the crossing for fear of being brutalized and prevented from crossing. Nothing is completely guaranteed, because it would be very normal to obtain the approval and have your name put on the coordination list and still be prevented from crossing without knowing why!”

Many Gazans try to use the Rafah crossing to avoid Israeli crossings in the hope of bringing in items that Israel does not allow. However, the situation is often not very different at Rafah, where many gifts and belongings are confiscated. Shadi, a young Gazan man who recently went through the crossing, said, “Often moving into or out of Gaza is subject to the mood of Egyptian officers. Sometimes gifts such as cigarettes are allowed and sometimes they are confiscated, and on one occasion a wheel of my motorcycle and two mirrors were confiscated, although I had receipts and there was no official ban on their entry. Of course, there is an Israeli decision to prevent the entry of any spare parts of motorcycles through their crossings, a decision that is supposed not to be applied by Egyptian authorities. However, the Egyptian officer refused to allow their entry and confiscated them from me.”

After making it through the Rafah crossing, the second phase of suffering and humiliation begins. The journey from Rafah to Cairo should only take six hours, but it can take up to two days, while the return journey can take between three and 11 days, according to testimonies by several Gazans. The bulk of the time is spent at security checkpoints along the road, according to Khalil. “There are 18 security ambushes and checkpoints where officers insist on emptying the contents of all bags and searching passengers very thoroughly at each checkpoint, although the same check was already conducted at the previous checkpoint. There is abnormal insistence on following the same procedures, causing hour-long delays, depending on how lucky you are.”

These procedures may not spare travellers from intransigence and abuse either. Shadi said that on one occasion a young man was filming the people and vehicles waiting for the ferries that would take them across the Suez Canal, prompting security officers to suspend all the ferries and insist on searching all mobile phones as well as detaining and assaulting the man who was filming, adding an extra day to the journey.

These measures are routinely applied to Gazans entering Egypt. However, if the reason for travel is to fly out of Cairo Airport, Gazans are escorted by a member of the intelligence service to the airport. There, they are subjected to another inspection and held in poor detention facilities without any personal items, including mobile phones, until their boarding time arrives.

The Rafah crossing is subject to many political and security restrictions, and its opening is usually dependent on security conditions on both sides of the border and relations between Egypt and Hamas. Monitoring in recent years show that the crossing was open for only 32 days in 2015, 41 days in 2016 and 29 days in 2017.

In extreme cases, several Gazans have been kidnapped or subject to forced disappearance by the Egyptian intelligence service because of their political affiliations. The most famous of these cases was the kidnapping of four young people on 19 August 2015 as they made their way to Egypt for medical treatment and study abroad. According to several Palestinian sources, a total of 15 people have been subject to forced disappearance at the Rafah crossing. Egypt has consistently denied involvement in the incidents and the Palestinian side has avoided talking to the media about the victims for fear of increasing tensions with Cairo. However, in February 2019, Egypt released eight people, including the four kidnapped in August 2015, who had links to the al-Qassam Brigades, Hamas’ military wing. The release came amid the political and security rapprochement between Cairo and Hamas.

The crippling siege of Gaza has prompted thousands of residents to flee. In 2018 alone, the number of people who crossed into Egypt and did not return exceeded 35,000, including 150 doctors. The 1.8 million who are unwilling or unable to leave live in hope that their situation will improve or that steps will be taken to allow them greater access to the outside world. 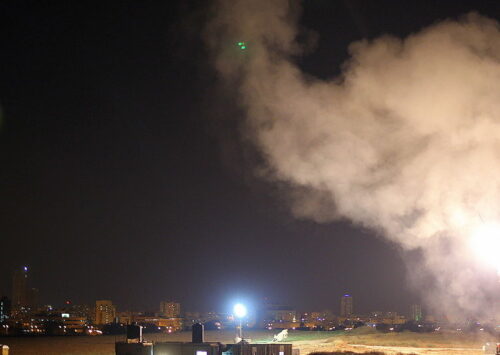 Blockade
After Hamas took power in June 2007, Israel and Egypt increased pressure on the Gaza Strip by closing the border crossin...