The number of Palestinian homes being demolished in the occupied Palestinian territories is on the rise, according to several NGOs.

A recent report published by Israeli NGO Ir Amim said that demolitions in East Jerusalem had increased by 44 per cent – Israel demolished 104 units in 2019; in 2018 that number was 72 – an apparent reversal of the trend seen between 2016 and 2018 when demolitions declined.

At the same time, new housing units are being built. Still, only 7 per cent are planned for Palestinians even though they make up around one third of the population in the territory.

Israel has responded to criticisms of the demolitions by claiming razed properties had been built illegally in Area C, which is under complete Israeli control, and that the Israeli High Court sanctioned the demolitions.

Speaking to al-Jazeera, Palestinian resident Mohammed al-Barzyan said, “All the money that I’ve collected during the past years, I’ve spent it to build this house, and in moments they destroyed it under the pretext that I didn’t have a permit.” He added, “With this decision, a family of 18 people became homeless.”

East Jerusalem, which Israel has occupied illegally according to international law since the 1967 war, has been a sticking point in peace negotiations in the region. Until December 2017, international mediators shied away from weighing in on its final status as both Israelis and Palestinians lay claim to it.

US President Donald Trump broke with years of policy when he announced the US would recognize Jerusalem as Israel’s capital and moved its Tel Aviv embassy there in May 2018.

Some say this has effectively greenlit further development in the city, which may further displace the Palestinian population and manufacture a Jewish majority.

But it is not only East Jerusalem that has seen a spike in demolitions. United Nations figures noted that overall demolitions in the West Bank rose by 45 per cent in one year. In 2019, 393 Palestinian buildings were either destroyed or confiscated in Area C, compared to 271 in 2018. Evictions also rose to a new high of 507 in 2019 from 218 the year before.

The spike came as Israeli Defence Minister Naftali Bennett committed to double down on illegal Palestinian buildings with a new task force.

Israel’s Civil Administration, the governing body that removes structures in the West Bank, claimed that it has not finalized figures from 2019 and cannot confirm if there has been an increase in demolitions. It did admit, however, that enforcement, including oversight of illegal construction on or near archaeological sites, has become more efficient.

Lawyer Qamar Mishriqi-Asad from human rights group Haqel also noted the broad application of an order allowing the Civil Administration to remove people from new structures built without permits within 96 hours of giving them their first notice, as long as no one has been living in the structure for more than 30 days. In the case of non-residential buildings, six months must not have passed since construction was completed. Previously, a lengthy legal procedure could delay demolitions for long periods. The new process eliminates recourse to appeal.

There may also be a conscious move at the political level and through advocacy by Israel’s political right. Regavim, a group founded by Transportation Minister Bezalel Smotrich, published figures of so-called illegal structures in a document it called ‘the takeover plan’.

These figures have been cited in Knesset (parliament) debates and “trickled into the defence establishment in a significant way”, according to Yishai Hamo, Regavim’s director of operations.

Jaber Dababseh, a resident of Khalet al-Daba village in the southern Hebron Hills, told the Israeli newspaper Haaretz, “Last September, they came and gave me a demolition order for my house. Less than two months later, the very same day I submitted papers to a lawyer to try to legalize the house, they came and demolished it.”

Amit Gillutz from B’Tselem explained to Fanack that in the West Bank, Israel is responsible for the planning and construction policy in Area C only, and it uses its authority to prevent Palestinian development. “The only – relatively rare – exception to this were the demolitions that took place in July [2019] in Wadi Hummus,” he said.

In that incident, 12 buildings in Palestinian areas under Palestinian Authority jurisdiction or administrative control were destroyed after an Israeli court allowed eviction orders to go ahead, claiming the buildings were in proximity to the separation barrier.

Also in 2019, the International Crisis Group (ICG) raised concerns over new Israeli policies that would entrench its de facto annexation of parts of occupied East Jerusalem. These include cataloguing all of East Jerusalem’s lands in the Israel Land Registry and inducing schools in the area to adopt the Israeli curriculum. They also include plans to redraw current municipal boundaries to remove dense Palestinian areas in the city that are east of the separation barrier. This would shunt them into disconnected Israeli regional councils and could precede removal of Palestinians’ residency.

Angela Godfrey-Goldstein, co-director of the nonprofit Jahalin Solidarity, said that the current programme of demolition and settlement expansion is about Greater Jerusalem, which encompasses Jericho and the Dead Sea as well as the controversial Maale Adumim settlement and E1 project. Plans for a new highway are underway that would go through the Palestinian neighbourhoods of Sur Baher, Silwan, Ras al-Amoud, the Mount of Olives and connect directly to the E1 bloc. One section of the road could involve the confiscation of 1.23 million square metres of privately owned Palestinian land.

The US may have been accused of facilitating settler expansion, but the European Union (EU) and the United Kingdom have also condemned Israel. In 2018, the former criticized the establishment of a tourist centre in Batn al-Hawa, a neighbourhood in East Jerusalem that lies south of the Old City on the path to al-Aqsa mosque. A statement released by the EU stated that the centre ‘directly facilitated settlement growth’ and warned that 100 families remained vulnerable of eviction.

Last year, the magistrate’s court in Jerusalem ruled to evict 16 members of the same family in Batn al-Hawa, claiming the building they lived in had cracks in the wall. An Israeli archaeological excavation under the Old City caused the cracks, and the building will be handed to Ateret Cohanim, a settler group that has launched numerous court cases to assert its rights over areas of East Jerusalem. Some 700 people could be evicted as a result, according to Israeli NGO Peace Now.

The group is also targeting the nearby neighbourhoods of Silwan and Wadi al-Hilweh, with the aim of evicting residents and excavating under their homes.

In the first month of 2020, Israeli authorities had already delivered 30 eviction orders to Palestinian homes.

Moreover, Christian Sanders, acting head of UNRWA, the UN agency for Palestinian refugees, told Reuters that Israel was seeking to replace the agency’s services with its own.

Sanders said UNRWA was feeling “the pressure in East Jerusalem in particular”, and that Israel was in the process of building schools and institutions “to compete” with the agency and stop it from operating there.

While the practice of demolitions has been a constant in Palestine, the recent escalation could be attributed to the political makeup and mood in Israel and globally, which has the potential to reconfigure the demographics in the territories. 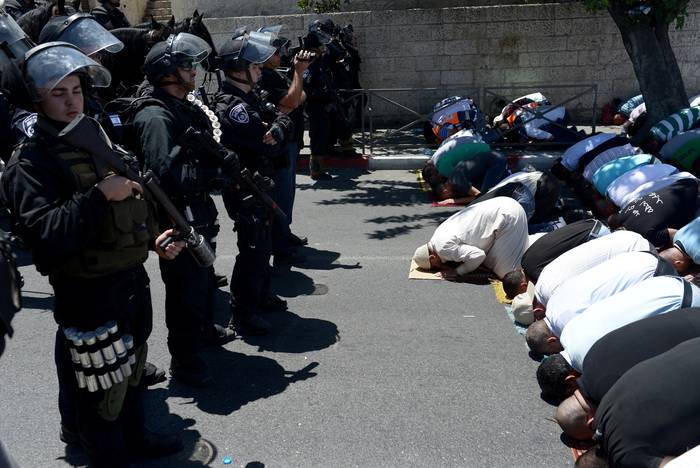