Following US President Donald Trump’s recognition of Jerusalem as the capital of Israel on 6 December 2017 and Palestinian President Mahmoud Abbas‘s decision to cut diplomatic ties with Washington, Palestinian-US relations have become increasingly tense. In 2018, the US adjusted its political and financial support for the Palestinian Authority (PA) and put the Palestinian leadership under pressure to join the US-led peace process with Israel.

Chronology of US Decisions against the Palestinians

In a tweet on 3 January 2018, Trump wrote, ‘America pays the Palestinians hundreds of millions of dollars a year and gets no appreciation or respect…But with the Palestinians no longer willing to talk peace, why should we make any of these massive future payments to them?’

Based on Trump’s position, a series of decisions were made against the Palestinians. On 17 January 2018, the US cut $60 million of the $125 million dollars earmarked for humanitarian aid to UNRWA, the United Nations agency for Palestinian refugees, for 2018. It is noteworthy that the US gave the agency $359.3 million dollars in 2017, and its total contribution to UNRWA since 1950 has exceeded $6 billion dollars.

The American embassy in Jerusalem was officially inaugurated on 14 May 2018, the day before the Palestinians commemorated the 70th anniversary of the Nakbah (‘catastrophe’), the displacement of the Palestinians following the establishment of Israel in 1948. On 25 August 2018, Washington announced it was cutting more than $200 million earmarked for economic assistance to the PA. On 31 August 2018, the US announced it was suspending funding for UNRWA completely, accusing the agency’s programs of being ‘irredeemably flawed’. On 9 September, the US cut $25 million, the last remaining financial aid allocated to the Palestinians, for hospitals in occupied East Jerusalem. On 10 September, the office of the Palestinian Liberation Organization (PLO) in Washington was closed as were its bank accounts. On 16 September, Palestinian Ambassador Husam Zumlut and his family were expelled from the US and their bank accounts were closed as well. Two days earlier, Palestinian-Israeli normalization youth programs worth $10 million were cancelled.

US Decisions met with Support, Opposition

Abbas insisted on severing diplomatic ties with Washington, despite the political and financial pressure exerted by the US administration. However, some observers, especially former and incumbent security officials, raised questions about the usefulness of the US decisions and their negative impact on stability in the region, particularly in light of waning US political influence on Palestinian leaders.

Since 1994, the US has directly influenced the Palestinian leadership through financial support programs, which to date have exceeded $5 billion. These support programs have been part of US foreign policy to promote the Israeli-Palestinian peace process on the one hand and to improve the living conditions of Palestinian in the West Bank and Gaza Strip on the other. In the past five years, US support for the Palestinians has focused on four different areas: Nonproliferation, Antiterrorism, Demining and Related Programs (NADR), International Narcotics Control and Law Enforcement (INCLE), Economic Support Fund (ESF) programs and Oversees Contingency Operations (OCO) programs (Table 1).

Trump’s position has been clear since the beginning of 2018. He said that the reinstatement of US aid was conditional on the Palestinians returning to the negotiating table, which the Palestinians consider to be political blackmail. Hanan Ashrawi, a member of the PLO Executive Committee, said, “The US administration has proven that it is using a cheap method of extortion as a tool for achieving political ends.”

For his part, Saeb Erekat, secretary of the PLO Executive Committee, said the latest US decisions are “a recognition of the true significance of the US aid policy as a means of interference in the internal affairs of other peoples and influencing their national choices.”

Nabil Abu-Rudaineh, spokesman for Abbas, said the US decisions were “a blatant aggression” against the Palestinian people and aim to fight the people in their two most important causes, “Jerusalem and the refugees”. He noted that the US administration no longer plays any role in the region and is not part of the solution.

US Support for Palestinian Security Services

US financial support in 2017 was limited to supporting the PA’s security services in the West Bank, with approximately $60 million allocated to continue security coordination with Israel and prevent Palestinian attacks against Israel.

On 3 October 2018, the US Congress passed a new counterterrorism act. Unlike the US Justice Against Sponsors of Terrorism Act (JASTA), which allows for governments to be prosecuted, the new act includes civilians directly or indirectly supporting terrorism. All those who receive US assistance will be implicitly obliged to sign a clause entitling the US Federal Court to be the legal authority of any terrorism-related litigation. Under the act, the US legal system can make individual claims against families who support terrorism.

This means that in return for the $60 million dollars to support its security services, the PA became liable to pay relatives of dual citizenship US-Israeli Jews killed by Palestinians hundreds of millions of dollars in compensation. Former Palestinian Prime Minister Rami Hamdallah was informed of the act during a meeting on 26 December 2018 with US Secretary of State Mike Pompeo.

The act puts the PA in an extremely difficult position, not least because it pays monthly financial aid to families of Palestinian prisoners and martyrs, whom the US considers advocates of terrorism, making it subject to legal liability. Hamdallah, in his capacity as interior minister, officially informed the US administration on 21 January 2019 that the PA would refuse to receive any US assistance, including aid to the Palestinian security services, starting 31 January, the date the act came into force.

All projects in the West Bank and Gaza Strip run by the United States Agency for International Development ended on 1 February 2019 and the projects still running will have to be continued by the Palestinians or halted.

The Israeli army expressed concern that coordination with the PA’s security services would be adversely affected following the authority’s decision to refuse financial support from the US.

Israeli sources claimed that Prime Minister Benjamin Netanyahu intervened in person to prevent the US act from being passed, visiting the White House to request an amendment to the act or another solution that would allow US support to the PA’s security services to continue. 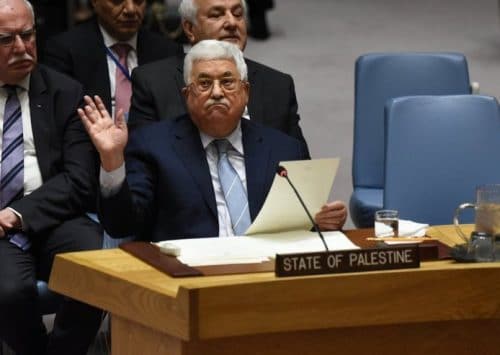 Trump Provokes Abbas to Anger
Despite the intense emotions the issue evokes, the Palestinian leadership’s continued tiptoeing around the internation...