Fanack Home / Palestine / Past to Present / The Oslo Accords / Opposition

NGOs are organized initiatives independent of any government, which offer services, help raise consciousness, and stand for civil rights. In practice, they also serve as a counter-balance to the state’s power.

As a result of the Israeli occupation and the absence of a sovereign Palestinian power, Palestinian NGOs started to play an increasingly important role in Palestine from the 1970s onwards. Most of these NGOs were initially affiliated with left-wing nationalist political parties. They offered services in the field of health care and arable farming, and documented human rights violations by Israel. During the First Intifada, they played a prominent role in the national mobilization against the occupation, as they were able to fall back on networks of volunteers. They received financial support from kindred NGOs in the West. In the course of time, they have thus managed to gain much knowledge and experience from these activities.

Since ‘Oslo‘, Palestinian NGOs have been confronted with a new balance of power. As mentioned, Fatah staff members returning from exile held the most important positions in the newly established PNA. However, the NGOs were opposed to the PNA’s policy of gaining control over as many important positions as possible within the administration in Palestine. Indeed, the PNA’s objective was, among others, to gain control over the flow of funds from Western governments that had provided generous financial support following ‘Oslo’.

The NGOs refused, however, to be marginalized by the new PNA ministries. In the meantime, they had joined forces in the Palestinian Non-Governmental Organizations Network (PNGO). Together, they opposed attempts by the PNA to infringe upon the NGOs’ independence through regulatory legislation. After a tough political battle against the PNA’s autocratic aspirations which lasted for years, the NGOs eventually managed to partially secure their autonomous position. However, the Second Intifada broke out before this could be put into effect, and the issue faded into the background.

In practice, the further professionalization during the ‘Oslo’ years alienated the NGOs from their traditional grassroots support. Indeed, they continued to provide essential services and control the power of the PNA, yet – unlike in earlier times – their role diminished during the Second Intifada. Critics regarded this as evidence that NGOs had become susceptible to Western governmental control due to dependency on donor funds (‘aid industry’). Criticism of the Oslo Peace Process from left-wing nationalist powers would thus have been politically neutralized.

A completely different story is that of the Islamic powers, embodied by Hamas and the Islamic Jihad. They first entered the political arena at the early stages of the First Intifada. Since then, Hamas has steadily gained influence, in part as a result of its substantial network of service organizations with close ties to the Palestinian people. Its funding did not depend upon Western governments (funding came above all from the Gulf States). Politically, Hamas and the Islamic Jihad were far from disorientated by ‘Oslo’ – in contrast to the left. They rejected the process on ideological grounds (no state of Israel in historical Islamic territory) and on the basis of the argument that Oslo Process formed a grave risk for the Palestinian people. In order to press home their rejection, they continued their armed attacks on the Israeli occupying forces and Israeli settlers after 1993. 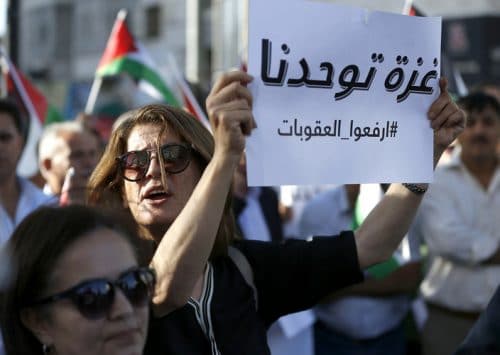 Demonstrations in Ramallah and Gaza – Message to Palestinian Leadership
The demonstrations were quelled by the Palestinian police by force, using batons and tear gas. A large number of demonst...