There are many lessons to be learnt from the most recent Gaza-Israel war in the summer of 2014, which lasted for nearly 51 days. One key lesson is that the conflict cannot be resolved by force. The three wars in the past six years have failed to achieve clearly defined objectives that would encourage the disputing parties to make compromises and stop the fighting. In the first half of 2015, there was much discussion about secret talks that reportedly took place between the Israeli government and Hamas (Islamic Resistance Movement), which controls the Palestinian coastal enclave. This is not surprising because peace is usually made between enemies, not friends. However, it is too early to talk of peace, especially as the negotiations were focused entirely on achieving a truce that might hold for up to ten years and be robust enough to pave the way for a long-term solution to a conflict that has lasted for 68 years. In addition, predictions of a third intifada are forcing Hamas to wait and see.

Many questions have been raised about the different roles that the various parties played and the seriousness of the alleged talks between the Palestinians and Israelis, which were mediated by former International Quartet Committee envoy Tony Blair. What was the content of these talks and what were their outcomes? Why have they not led to tangible results on the ground? In March 2015, Hamas leader Dr Ahmad Yusuf spoke of indirect talks that he described as “chats”. At the time, he did not mention that Blair was acting as mediator. Yusuf’s remarks fiercely divided opinions. The Palestinian Authority strongly rejected the talks, describing them as suspicious and designed to establish an (Islamic) emirate in Gaza, while some international and regional parties were tentatively supportive. So, what is the truth about these talks and why did they stall?

Perhaps the main consequences of the 2014 war was the inability of the Israeli government to remove Hamas from power, coupled with the failure of the Palestinian armed resistance led by Hamas to effect any significant change to the balance of power on the ground. These two results were the main factors that led both parties to change their approaches and resort to indirect talks to achieve their objectives. Hamas emerged from the war battered, having sustained significant losses to human life and property. Israel, meanwhile, lost international credibility. Hamas has tried hard to lift the crippling Israeli blockade imposed on Gaza eight years ago, while Israel wants to achieve security in the southern region by all means.

The two parties know exactly what each needs from the other, and each party knows that it will pay a price in return for achieving its goals. Perhaps regional developments – including Hamas’ support of Saudi Arabia in the war in Yemen, Iran’s nuclear deal and strained relations between Hamas and Iran, its key patron – have contributed directly or indirectly to increasing the possibility of striking a deal that has become known as “Development in Return for Calm”. Should it succeed, it will be less a “political” deal and more a “humanitarian” agreement between Israel and Hamas, brokered by Blair who met Khalid Mish’al, head of Hamas’ political bureau, up to five times between February and August 2015. There is no doubt that, despite Israeli Prime Minister Benyamin Netanyahu’s denial of any talks, Israel wanted the deal. It is thus not surprising that news of the negotiations made it into the Israeli daily Haaretz, because the goal was to prepare Israeli public opinion for a deal that was already anticipated. Although there were some differences in the details of the deal as reported by various media outlets, the majority of Arab and Israeli media agreed on the following points:

Of course, the deal must have included several other items, and in July the Israeli government raised the issue of the two Israeli soldiers that it claims entered Gaza by mistake and were captured by Hamas. Hamas has declined to comment on the fate of the soldiers. This is in addition to the issue of the bodies of two other Israeli soldiers held by Hamas since the war last summer. For its part, Hamas has sought to secure the release of the largest possible number of Palestinian prisoners held in Israeli jails for many years, in a deal similar to the one it struck in return for the release of Israeli soldier Gilad Shalit in 2011. Since German Foreign Minister Frank-Walter Steinmeier visited Gaza in June this year, rumours have circulated about possible German mediation between the Israelis and Palestinians. In fact, it was Steinmeier who first used the term “Development in Return for Calm”.

Although media outlets covered the topic exhaustively, there was no confirmation that a ceasefire deal was about to be announced. However, several signs indicated that a significant development had occurred, especially after ongoing meetings with Blair, who resigned from the Quartet shortly after his surprise visit to Gaza on 17 February 2015 during which he spoke of what is expected from Hamas in return for allowing it to integrate into the Palestinian political system and for official international recognition. At the time, Blair presented a set of conditions, which included Hamas accepting a two-state solution and confirming that it is a purely Palestinian entity, not part of a regional Islamic movement. The second condition was perhaps not a completely Israeli one, but rather set out to mollify Egypt and Saudi Arabia.

Observers of Palestinian affairs would infer that Hamas has secretly approved Blair’s conditions, including the second one. If it had not, a Hamas delegation headed by Mish’al would not have been able to meet Saudi King Salman Bin Abdul Aziz in a visit to the kingdom during the Muslim Eid al-Fitr festival in July 2015. Neither would the Egyptian government have opened the Rafah crossing for several consecutive weeks during that period before closing it again. Hamas paid a dear price by remaining silent about the Egyptian court verdicts against Muslim Brotherhood leaders, justifying its silence by saying that the verdicts were a domestic Egyptian matter in which it should not interfere. Moreover, the Saudi rapprochement with Hamas has coincided with a growing split between Hamas and Iran, Saudi Arabia’s arch rival in the region. As a result, relations between Iran and Hamas have worsened and some hard-line Iranian decision-makers have openly criticized the group. This angered Musa Abu-Marzuq, deputy head of Hamas’ political bureau, who responded by blocking any opportunities for Hamas leaders and military commanders to improve relations with Iran at the expense of Saudi Arabia.

But the main reason behind the stalled talks was the proposal to establish a (maritime) waterway for the transport of goods into and out of Gaza. Israel has agreed to a waterway in principle, provided it is operated under Israeli control. However the proposal, which is highly sensitive and has international repercussions, was discussed with the Palestinian Authority, which dismissed the entire idea. In fact, it would be impossible to reach an agreement on this point since it would be tantamount to an indirect recognition of Israel by Hamas and of Hamas by Israel. This is unacceptable to both parties, at least at the current stage. The Palestinian Authority also fears that such an arragement would create a Gazan “statelet” independent of the West Bank. So said Fatah official Nabil Sha’ath in late August 2015, a position that was echoed by Palestinian Prime Minister Rami al-Hamdallah in an interview he gave to al-Hadath newspaper in Ramallah on 30 September 2015.

There are, of course, a number of gains that Israel would make by reaching an agreement with Hamas. On the territorial front, Hamas would promise to maintain security on the border with Israel for at least eight years. On the political front, Israel would benefit from the geographical split between the West Bank and Gaza and could begin to implement the vision of economic peace that Netanyahu has advocated for years. Hamas would also benefit, perhaps most importantly from a complete lifting of the blockade and from international recognition. This in addition to Hamas maintaining power in Gaza. Accordingly, such a deal would result in two separate governments in the West Bank and Gaza, which would serve purely partisan interests in both territories while potentially halting for years to come the ultimate goal of creating a unified Palestinian state based on the 1967 borders. 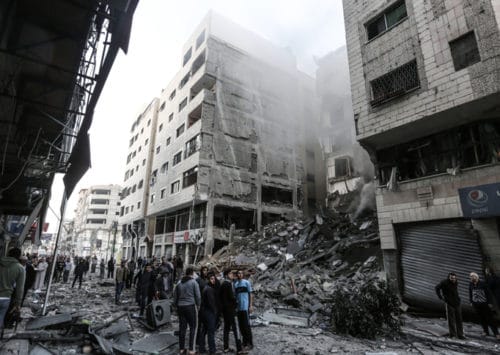 Israel and Hamas – Truce Deal or Fierce War?
Unfortunately, there was little time to relax. On 11 November, the Israeli army assassinated one of Hamas’ field comma...