The Swiss Role in Palestinian Politics

International politics, like Nature, cannot tolerate a vacuum. In politics, as soon as a player leaves the game, another jumps in to take his place. Since December 2010, when the Arab Spring began in Tunisia, the Arab region has witnessed major, fast-moving political developments, and many players have joined the political field as many others left.

Among the players deeply affected by those developments were the political Islamist parties, whose influence over regional politics experienced a drastic change.

One of those parties was Hamas, which left the Syrian-Iranian alliance after the start of the war in Syria in 2011 and aligned itself with Qatar, Turkey, and Mohamed Morsi’s Egypt. Its allian ce with Egypt, however, lasted for the only the one year during which Morsi ruled the country, before things changed radically, when the Egyptian military ousted Morsi in July 2013 and took power.

Hamas is essentially part of the Muslim Brotherhood, a bitter enemy of the Egyptian military, so, when Egyptian General al-Sisi took over the presidency, the Hamas-Egypt honeymoon turned into enmity.

For a long time, Cairo had acted as mediator in the inter-Palestinian reconciliation process between Hamas and Fatah and had always mediated Palestinian-Israeli truces and prisoner swaps. The split between Hamas and Cairo left this position vacant. Turkey and Qatar tried to fill Egypt’s role in Palestinian politics, but their involvement was rejected by Egypt, the Palestinian authority, and the rest of the governments of the Gulf region. Hamas has been having distinguished ties with each of Qatar and Turkey. Therefore, the tension in Hamas’s relationship with Cairo was reflected in the relationship between Egypt on the one hand and Qatar and Turkey on the other, and the latter countries recalled their ambassadors and reduced their diplomatic representation in Cairo.

In 2015, Switzerland intensified its unofficial communication with Hamas, in an attempt to help with the integration between former and new government employees in Gaza.

While Hamas headed the government, it hired many civil servants, but these workers have not been recognized by the government in Ramallah as employees of the Palestinian Authority, and their problem is still unresolved. While Hamas insists that they should be integrated into the government administration, Ramallah is trying to replace them with those who held their positions before Hamas came to power and who have been receiving their salaries, despite the fact that they have not reported to work for eight years. The meetings have resulted in what is now called “the Swiss Document,” which says that “whoever does a job should receive a salary and whoever receives a salary should do a job.”

The logic of the document was appealing to the Palestinian president during his visit to the Swiss capital, Bern, early in March 2015. The document was also accepted by Hamas, as it guarantees the integration of a considerable number of government employees who were hired under Hamas’s government in 2007. Several of Hamas’s leaders (e.g., Ziad Zaza, a senior leader), however, expressed reservations in a press conference on 24 March on several points, including the “security vetting” of employees.

Switzerland has managed to fill the gap left by Egypt, which had lost the role it played in Palestinian politics when an Egyptian judge in February 2015 decided to declare Hamas a terrorist organization. Later, however, Cairo realized that it had only hurt itself by blacklisting Hamas, and it tried to repair the damage by retracting the decision.

What does Switzerland want?

The Swiss role in Palestinian politics should be neither overestimated nor underestimated. Bern seems willing to play the role of a fair mediator at this time, when Gaza is on the verge of collapse, suffering the aftermath of the last Israeli assault (July-August 2014), a delay in reconstruction, and an increase in unemployment to 55 percent and in the poverty rate to 65 percent, according to a spokesman of the Gaza Chamber of Commerce in an interview with Watania online news on 8 April 2015.

Israel seeks to maintain the relative calm in Gaza, regardless of who rules it. The role played by Qatar has complicated the situation for the Palestinian Authority and Egypt. Qatar, the biggest financial backer of Gaza ‘s reconstruction, with a contribution of $1 billion, is trying to get Gaza’s rebuilding underway, regardless of where the construction materials come from. The Qatari ambassador who is overseeing the reconstruction process arrived in Gaza on 8 March 2015 through an Israeli crossing, after Cairo denied him passage through the long-closed Rafah crossing.

The ambassador has already managed to strike several deals with the Israelis to purchase from Israel all necessary construction materials. Much of this material was supposed to be bought from Egypt, according to the reconstruction plan that was submitted in the Cairo conference (12 October 2014) on the reconstruction of Gaza. It seems, however, that Qatar has given up on Cairo on account of the continuing tension between the two governments and after Egypt’s long delay in deciding whether to allow the Qatari ambassador to cross into Gaza via Rafah.

Gazans have come to realize that neither Cairo nor the Palestinian Authority is willing to show Gaza any mercy. In fact, this has been realized by everyone else, including Israel, the European Union, and the United States. These three actors do not want to see the situation in Gaza explode; they prefer to stabilize the fragile calm after the latest military operation in Gaza and have therefore secretly approved the Swiss role in the internal affairs of Palestine.

However, the Palestinian prime minister’s visit to Gaza on 25 March was meant to send a political message to Bern, Doha, and the rest of the world that the PA controls the Gaza Strip and that anyone who wants to go to Gaza has to do so through Ramallah. The visit was intended to block Qatari-Israeli coordination in rebuilding Gaza without PA approval.

Switzerland’s actions with regard to the Palestinian situation show that it does not follow the EU in considering Hamas an illegitimate partner in dialogue. Bern seems to have a different objective in its inter-Palestinian mediation: it wants to neutralize Hamas. No Palestinian-Israeli talks can be held as long as Israeli Prime Minister Netanyahu is using Hamas and the Palestinian split as an excuse to refrain from negotiating with the Palestinians. Once Hamas is politically neutralized, both the EU and the US can exert more pressure on Israeli decision makers to resume talks on a two-state solution. 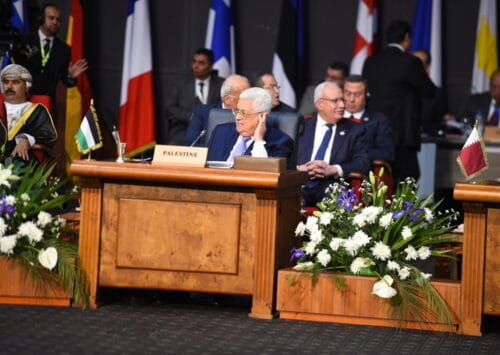 Internal Palestinian Politics Largely Determined by External Interests
It was believed in the past that the Palestinian-Israeli conflict was governed and influenced by regional and internatio...