Fanack Home / Palestine / Past to Present / The West Bank

In the War of 1948, the region that today comprises the West Bank was taken over by King Abdullah I of Transjordan’s army (following a secret agreement with the leaders of the Zionist movement). As a result, the region was abruptly cut off from the rest of Palestine, with dramatic social and economic consequences. The core area was transferred from the relatively highly developed western part of Palestine to the desert state in developing Transjordan.

The Jordanian rulers annexed the West Bank in 1950. As Transjordan now encompassed both the East and the West Bank, together with the annexation the name Transjordan was transformed into the (Hashemite Arab) Kingdom of Jordan. To enforce their claim, the authorities introduced the term ‘West Bank’ for the region, and it was forbidden to use a term which included the word ‘Palestine’ in official Jordanian documents. Following the annexation, Palestinians living in the West Bank and in former Transjordan were given Jordanian nationality (albeit later with the registration in their passports that they originated from the West Bank).

Between 1948 and 1967, the West Bank remained in Jordanian hands. It was a rule of domination, the Palestinian population’s interests, both politically and economically, wholly subordinate to those of the rulers in the East Bank. In the process, the natural resources of the West Bank were used to facilitate the development of the East Bank. Through a combination of co-optation by part of the elite and repression of Palestinians who resisted the Jordanian domination, the Jordanian rulers managed to keep control over matters in the West Bank until 1967.

Armed resistance by Palestinians in the West Bank was met with heavy Israeli reprisals. An infamous event was the Israeli commando operation in the village of Qibya (12 October 1953), when dozens of houses were blown up and more than forty citizens were killed. 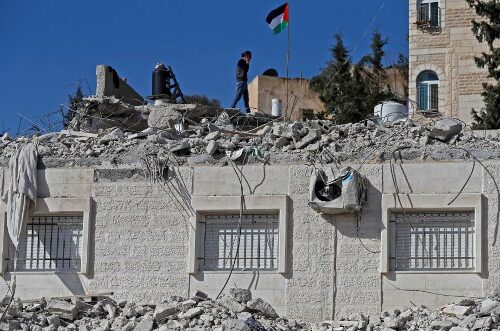