The current political developments in Palestine have been, to an important extent, determined by what is known as the Oslo Process, which resulted Oslo Accords in 1993 and 1995.

After decades of exclusion, the Palestine Liberation Organization (PLO) started to participate in the diplomatic process. UN Security Council Resolution 242, which was adopted several months after the June War of 1967, spoke of the Palestinians exclusively in terms of refugees – and not of a nation with political rights. The PLO can take the credit for putting the Palestinians on the political map.

Although UN Security Council Resolution 242, dated 22 November 1967 (a few months after the June War) became the starting point for later negotiations between Israel, various Arab states and the PLO, it is in fact a controversial resolution. When drafting the text, Israeli diplomats, pulling the strings, managed to negotiate the wording in such a manner that it left space for Israel to realize its territorial ambitions. Article 1, par. 1 thus states that ‘withdrawal of Israeli armed forces from territories occupied in the recent conflict’ is required for the establishment of a just and lasting peace between Israel and the Arab states. In the English version of the text, the definite article ‘the’ is lacking, whereas the French version states: ‘retrait des forces armées israéliënnes des territoires occupés lors du récent conflit’. In other words, withdrawal from ‘occupied territories’ (English version) or withdrawal from ‘all the occupied territories’ (French version). Of course, Israel has always used the English wording as a starting point for negotiations. However, the French version takes precedence in view of the preamble of the resolution – in agreement with the Charter of the UN – which speaks of ‘inadmissibility of the acquisition of territory by war’. Moreover, by letting the resolution fall under Chapter 6 instead of Chapter 7 of the UN Charter, the international community has deliberately chosen not to enforce a total withdrawal by Israel via the UN. (Under Chapter 7 of the Charter, a member state can be forced to comply with UN Security Council resolutions, in last instance by use of force.)

It was neither the first nor the last time that the UN Security Council would adopt different standards for Israel than, for example, for Iraq when it occupied Kuwait in 1990. Given the unequal balance of power, the Palestinians are pre-eminently dependent upon international law. In the text, however, they are referred to merely as a ‘refugee problem’.

The original PLO program – advocating the unification of Israel and Palestine in one Palestinian state, in which Jews, Muslims and Christians would live side by side on the basis of equality and equal rights – which was to be effectuated through armed conflict – was not in line with the superpowers’ policy of a two-state solution.

Even after a majority within the PLO had dropped these demands (first cautiously, then irrevocably) in the 1970s, and had subsequently declared its willingness to work towards a so-called two-state solution – a Palestinian state in the Palestinian Territories alongside Israel – still the PLO remained barred from any kind of diplomatic consultation. Recognition of the PLO by the Arab League as the ‘sole legitimate representative of the Palestinian people’, the granting of the observer status at the United Nations, as well the resolution adopted by the UN General Assembly in which the right to the Palestinian people’s self-determination was recognized (all in 1974), brought no change. The United States and most West European states continued to support Israel in its denial of the Palestinian people’s national aspirations. 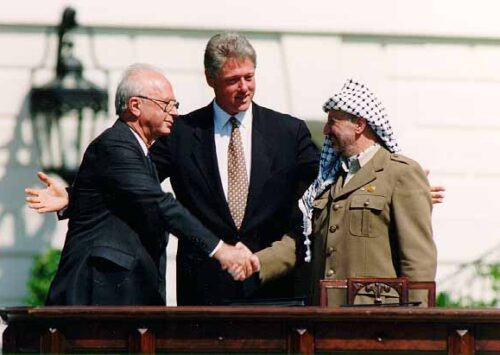 The Oslo Accords
In the Declaration of Principles of 13 September 1993 (Oslo-I), the State of Israel and the PLO recognized 'their mutual...